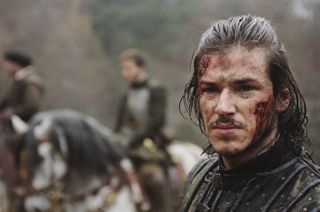 
A collaboration between Picktainment/PopCulturePassionistas
This weekend an epic French film is opening in select theaters in New York and Los Angeles. The Princess of Montpensier is based on the short story by Madame de La Fayette, and tells the tale of a young, aristocratic woman forced to marry in the shadow of the Wars of Religion. At a recent press conference director Bertrand Tavernier and star Gaspard Ulliel talked about developing the project, the appeal of the characters and finding the perfect leading lady.

Tavernier explained that when he signed on to the film, there was already a script in place — but not for long. ““I don’t think we kept one line out of it… It was not appalling. It was interesting but I think the look at the princess was not good. The writer was describing her as a femme fatale in a film noir and for me that was the opposite.”

The fact that Tavernier was not familiar with the original short story by the 17th century writer Madame de La Fayette, allowed him to interpret the title character, the Princess Marie de Montpensier, as he saw fit. He divulged, “I read first the screenplay, then the short story and I had absolutely not the same interpretation. I saw her as a victim not somebody who wanted to seduce the men. If I have that, I have a very ordinary character.”

He continued, “If I have somebody who is trying to survive, trying to be faithful to her husband, who falls in love with her, which was not expected. And then when she meets men, the men are seduced by her – by her beauty, by her intelligence, her wit. But she doesn’t try to seduce them. She’s pleased maybe to be looked at but she never tries to seduce. Then I have a character which is very interesting and very complex.”

Casting an actress who embodied all of those qualities was not an easy task. Travenier discussed the first of his issues. “It was a challenge because Marie had to be beautiful, stunningly beautiful. But also she had to look good in period costume, which not everybody’s good in that. For instance, you have a great actress Sigourney Weaver, when she played the Queen of Spain, she looked completely disguised… So I had to have somebody who didn’t look disguised in costume.”

The director also had to discover a multi-faceted talent. He remarked, “I had to find somebody who had all the colors of the part — the sensuality but also the teenager, the fact that she’s a very young girl, who likes to flirt, who is trying to make fun of her teacher, like a young kid in school. And in the next minute, she becomes class conscious and aristocratic. And she goes from being a wounded woman to somebody who is full of pride to somebody who is ready to make love now with de Guise. And she’s fighting against that.”

He ultimately cast French actress, Mélanie Thierry. He described the qualities that helped her land the role. “To have all of those colors, all those kinds of emotion, and Melanie was incredible because she goes from one to the other and you never see the homework. You never see the transition. Really she was like flying from an emotion to another.”

Tavernier had nothing but praise for his young starlet, saying, “I know actors. And I love actors. And she’s one of the best I’ve ever worked with. She was confronted to a dialogue, which was complicated and she was making it organic. She told me first that she had been intimidated because she went to see me at the beginning and I have spent many moments with her, she said, ‘Bertram, I must tell you I have no education but I want to learn. So I want to read the screenplay with you. I will tell you the words I do not understand. I will tell you the expressions I do not understand. And she was like Marie. She was exactly like Marie. She wanted to learn.”

Tavernier also spoke highly of the rest of his cast, including Ulliel who plays Marie’s love interest Henri de Guise. He noted, “None of the actors, never made any mistake in that dialogue. I don’t remember one shot which I had to redo because they had forgotten an adjective. Never… They are possessed by the dialogue. And everything becomes completely organic.”

Ulliel revealed what drew him to the role of the Henri. “I like this character because I was able to show different things from what I've shown in other films. And also the physical appearance, the look, was different from my previous parts in other movies, too. And it was a mixture of physical scenes, like action scenes, and at the same time some more complex and deeper emotional scenes.”

He also gave high marks to the script. He added, “I also really liked the whole story because I think it had so much strong themes, really modern in some way and actual, that would have some resonances with present time.”

Ulliel was also excited to be working with a large ensemble cast of his peers. “I also was thrilled with the idea of working such a big group of young actors. Because I started quite young in this industry and I always tended to be working with people that were older than me and that's the first experience for me where I was really able to spend a lot of time on a set with people around my age.”

The actor had one other co-star, that became very important to him — his trusty steed. He confessed, “I'm really thankful to the horse himself, because he was so well trained and so easy to ride. In fact those horses are especially trained for cinema and they always tend to be ridden by actors. And actually you could just whistle and this horse would stop. I was just so impressed by those horses. So I think the horse made it a bit easy for me."

Unfortunately Ulliel isn’t having as easy a time transitioning into mainstream Hollywood films. In 2007 he starred in the Silence of the Lambs prequel Hannibal Rising, playing a younger version of Anthony Hopkins Oscar-winning Hannibal Lecter role. But his star did not immediately soar in the U.S.

He denied rumors that he’ll appear in the post apocalyptic trilogy The Hunger Games. But there’s no doubt the handsome and talented star will find fame in Hollywood before long.

The Princess of Montpensier opens on Friday, April 15 in an exclusive Los Angeles theatrical engagement at Laemmle's Royal Theatre, as well as in New York. On April 20 the film will be available via Sundance Selects’ video on demand platform. The movie will expand into theaters across the U.S. on April 29. For more information visit the official The Princess of Montpensier website.