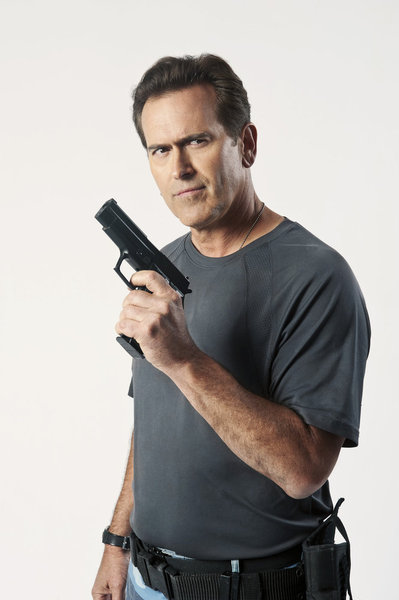 Photo by David Giesbrecht/USA Network
We have been fans of Bruce Campbell for a long, long time. Although we aren’t really horror fans, we totally dig the Evil Dead

trilogy. We hate westerns but we loved The Adventures of Brisco County, Jr.

And we struggle to get through dry celebrity bios, but we couldn’t get enough of If Chins Could Kill: Confessions of a B Movie Actor

. So we can’t help but enjoy watching him each week on Burn Notice. On Sunday, April 17, Campbell will star in a two-hour prequel to the series called Burn Notice: The Fall of Sam Axe. In a recent conference call interview he talked about shooting in Columbia, his Hawaiian shirts and his dream for Axe in season five.

Bruce discussed the ups and downs of shooting in South America. “Columbia was challenging but, therefore, authentic because the story actually takes place there. Normally what happens in Hollywood is they say it takes place in Columbia and they shoot it in Burbank, California. So it was refreshing to go to the actual place. But as a result it was very difficult.”

He added that the weather was not as unpleasant as it can be in Burn Notice’s usual home, Miami. “In Bogota, Columbia, it’s about 65 degrees on average down to about 50 at night. So they’re near the equator but they are at 8600 feet. So they have a strange sameness about their weather. So no, it was not Miami at all even though we’re near the equator.”

When asked the greatest challenge about filming in Columbia, Bruce joked, “Being the leading man again. Yes, Jeffrey Donovan is number one on the call sheet in Burn Notice and I’m number two. And in the Sam Axe movie I’m number one. And boy that’s a drag, let me tell you. It reminds me of the old days where you had to show up everyday and work all day long and be the hero. So I had to kind of get back into that mode.”

Surprisingly being the hero is not a role that comes naturally to the man who played the chainsaw wielding Ashe in the Evil Dead movies. Bruce confessed, “I’m very unheroic. I mean I saved a dog from drowning in an icy pond once. But beyond that that’s the lack of my heroics. The rest of my heroics are written by writers and performed by stunt people.”

He’s actually way more comfortable in Sam Ashe’s clothes than he is in his courageous shoes. Bruce said of his Tommy Bahama wardrobe, “I wore that before Burn Notice so to me it’s normal. I’ve always liked that relaxed style. So when Burn Notice came up and [Axe] wore Tommy Bahama, I was like, ‘That’s perfect. Just give me the normal shirts that I wear.’ So I’m all over it. [I] could be the spokesman. We did a list currently I think I’ve worn 250 different Tommy Bahama shirts. And so I should get like basically a truckload of free shirts.”

In addition to his comfortable wardrobe, Bruce seemed grateful for the more carefree lifestyle that being a successful actor affords him. He divulged, “I just took a bike ride for no apparent reason today in Southern Florida for about three hours. Going in no particular direction because I have to work tomorrow, but I didn’t work today and I worked the day before. So today’s not a workday so I get to… not work. I’m sort of a professional delinquent.”

And that’s a gig Bruce would like to hold onto. When asked his hope for Axe in Burn Notice's upcoming season five he quipped, “Just keep him around. Just don’t kill him. Don’t hit him with a bus. That’s all. Just keep him alive.”