The Cast of Drew Carey's Improv-A-Ganza Discusses Their Influences 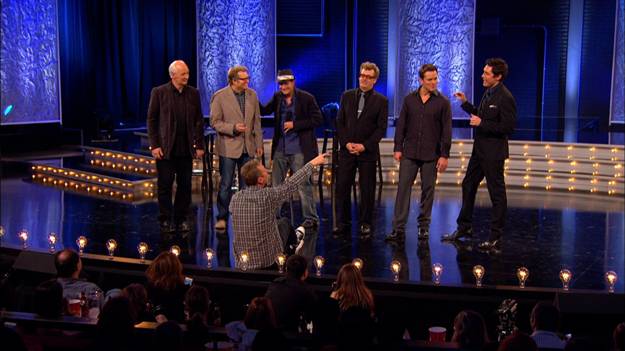 We love hearing the names of the stars that have inspired contemporary performers. So it was a blast during a recent conference call interview to listen to the stars of the new series Drew Carey’s Improv-A-Ganza talk about the comedians that influence them.

Ryan Stiles kicked it off citing, “Sid Caesar and Carol Burnett and Jonathan Winters. I mean all of the people that we grew up with… Kids don’t know who they are these days.”

Greg Proops gave a shout out to, “SCTV show with Rick Moranis and Catherine O’Hara, John Candy…. When I was in college… I thought they were the funniest sketch group ever.”

Kathy Kinney agreed, “Yeah, I did to. Canadians.” Colin Mochrie mirrored the opinion, “Yeah, Canadians are funny.” He added, “I was a big fan of the old guys like Jack Benny and Jonathan Winters and Bob Hope.”

Jonathan Mangum chimed in, “Dave Letterman… and Monty Python of course, and Bob Newhart… Those are probably the top three for me.

Kinney summed up her list, saying, “Bob Newhart, and for me all the woman — Lucille Ball, Carol Burnett and the woman who played my grandmother, Phyllis Diller… Still sends me a Christmas card every year. That’s family.”

Sharing taste in comedic history is just one of the factors that binds the Improv-A-Ganza team. Everyone on the show is also highly skilled at the craft. Mocharie explained, “Everybody has a solid improv background so there’s the trust.”

As a result, they’ve become a funny fighting unit. As Mocharie described it, “Everybody has the skills and the knowhow, and then just after working with each other for so many years it’s almost like we’re like an Army platoon. Everybody’s watching everybody else’s back, so we’re out there to make sure everybody’s having fun, and we do.”

Check out the gang in the comedy trenches on Drew Carey’s Improv-A-Ganza weeknights at 8 p.m. and 11 p.m. EST/7 p.m. and 10 p.m. Central on GSN.
Posted by Pop Culture Passionistas at 2:00 AM