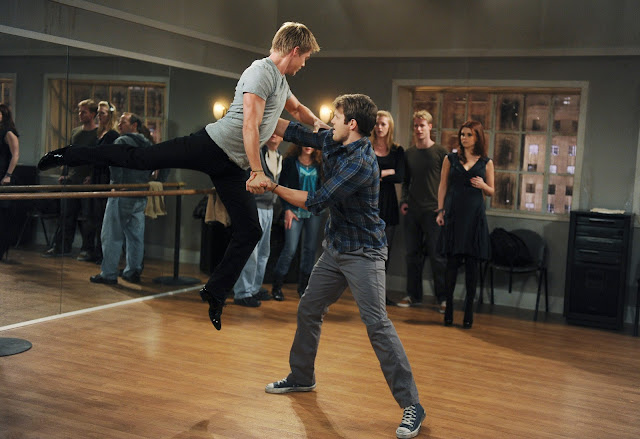 Derek Hough has been one busy guy since deciding to skip a turn in the ballroom this season on Dancing with the Stars. First he’ll appear on the sitcom Better with You tonight playing, what else, a dance instructor. Then he starts filming the dance flick Cobu 3D. And he’s got a few other TV projects bubbling that he hopes to see gel next year. In a recent conference call interview, Derek talked about all of his recent opportunities.


The three-time mirror ball champ took on his first scripted TV role on the sitcom Better with You. And the former star of the London stage acknowledged that he enjoyed tapping into those talents again. “It was just fun getting back into the acting realm and having to learn a script. And really it was just very light hearted and just a fun little piece that we did together. And it was great meeting the whole cast. And the director was fantastic. It was just a lot of fun being reintroduced to television and acting and the stage. So it was a very nice reintroduction. It was great.”

Hough, who starred in the musical Footloose in London’s West End in 2006, also has his sights set on the Great White Way. He divulged, “I would definitely want to do Broadway sometime in the future. I think it’s definitely on one of the bucket lists.”


The star, who has a band called Almost Amy with his DWTS co-star Mark Ballas, continues to pursues his interests in music. “I actually wrote a song for the film I’m doing. I just did the score. There’s no lyrics or words just the score. So I have scored one of the pieces in this film. So ya, I’m still doing music… just in different areas.”


The film in question is called Cobu 3D. Derek described it as “more serious but with dancing, obviously, involved in it.” Apparently it has a lot of dancing in it. During our interview Hough revealed, “Right now I’m dripping wet, sweating. Seriously. I’m actually streaming sweat down my chin cause I’m just in the middle of rehearsing right now. So it’s pretty full on.”


He explained that Cobu will be a little grittier that his Dancing with the Stars fans might be used to. He noted, “The tone of it is going to be pretty edgy and a little bit more real as far as story goes… with some dancing involved. But what we’re trying to do is not make it more of a spectacle… like, ‘Wow. Wow. Wow.’ But more of a story with good dancing involved.”


One thing Hough won’t be doing this year is appearing on his old show. He’ll be too busy filming in Toronto to make even a quick guest appearance but he said he isn’t ruling out the idea of returning as a regular at some point. For now he commented, “It’s interesting being on the sidelines, not being part of it. But also I really feel like I’m growing a lot and being able to work on myself a little bit before I can go back in there.”

But Derek is also interested in pursuing roles that have nothing to do with dancing. “I think that these things have spawned from the popularity of Dancing with the Stars and having to play on that I suppose. But no, absolutely, I would love to be part of something that was very straight acting and not just a spinoff of what I do or what people know me for from being a dancer. It would be nice to do something different but I like the idea of being maybe that guy that is a dancer but does everything else as well. I’m grateful for the different opportunities but also would eventually like to do stuff that’s not just a spinoff of what people know me for.”


That’s why he’s enjoying the diversity of his career at the moment. “For me just doing one thing was never really enough for me. I always wanted to do everything. And I’ve been very fortunate to be able to pursue that and to have different stages and different opportunities and different platforms to show off what I’ve been working on.”


Besides there’s a benefit to being a world class male dancer. He laughed, “It’s the absolute best way to meet the most beautiful women in the world.” This is a fact that did not escape even a very young Derek when he was starting out. He reminisced about the beginning of his career, “Honestly when I first started dancing I was a little boy. I thought it was really stupid and dumb. But once I saw the kinds of girls in this class, and I was like ten years old, I was like, ‘Well this isn’t so bad.’ So obvioulsy that was a really big factor in me starting to dance was the girls at a young age. And of course, obviously, you get more into it. It’s a really fantastic thing.”


Of course there’s a price attached to all of this fame as well. Thanks to his hit show, Hough is recognized around the world, “It’s pretty crazy — and not only in America, even in South Africa or England or places like that — everywhere. [Dancing with the Stars] airs everywhere… I would expect not everybody to recognize me outside of the states but it’s pretty crazy.”


As a result Hough has had some very intense fan encounters. He recalled a few of them. “I had this one fan who, when I did a show in London, she would be there every single night for like a hundred shows… That was a little creepy, but that’s okay…. You’ll be on the street and somebody will grab you and be like, ‘Hey, what’s up?’ And that’s not normal. So you initially react to that like, ‘Why are you grabbing me?’ It’s kind of freaky but then you realize that they feel like they know you. But it’s cool. It’s all good. They’re all amazing so.”

WilliamShatner Is at it Again