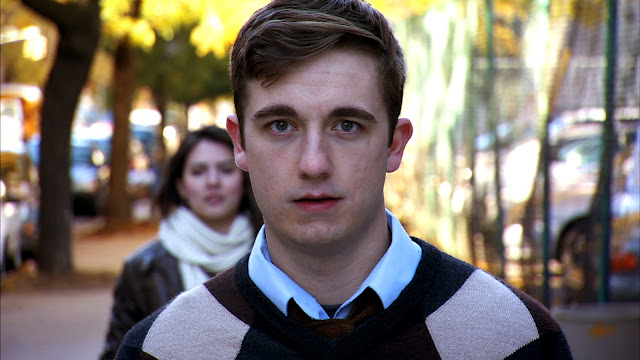 The makers of Him, Her and Them hope to revolutionize the film industry by taking it social. The interactive Facebook film/app debuted on April 11. It's a mixture of fixed scenes interspersed with opportunities for viewers to add to the story.

The interactive scenes are made up of a series of photographs that viewers are encouraged to comment on. Then, like any Facebook post, your friends, and only your friends, can see your contribution to the film. Him, Her and Them still makes sense as a narrative piece whether or not you participate in the social element, but by adding your comments, the story becomes more personalized.

The project is the brainchild of Murmur Studios, founded by Hal Siegel and Mike Knowlton. Hal (who has a background in design) wrote and directed the film, while Mike (who comes from the tech world) produced it. They have been working in the digital space for more than 15 years for various agencies and clients, but this is the first product in this realm for the pair. Mike answered some questions for us about the project.

How did you come up with the idea to make a social film?
"We came up with the idea over the past summer and it was something that evolved over time. We were influenced by two main sources: interactive film projects like The Wilderness Downtown and Collapsus, and the social mechanics present in casual games from companies like Zynga. We wanted to develop a film that had both linear narrative and interactive elements. We also wanted to integrate the social functionality that is found in social/casual games. The intersection of these two ideas (interactive storytelling and social functionality) formed the foundation for the idea."

"We saw Facebook as a logical platform for distribution. It is an existing marketplace and its Graph API allowed us to implement social functionality into the film itself. We also wanted to explore the idea of telling a complex story on Facebook. So many of the more popular casual games feel simplistic or one-dimensional when you play them. We wanted to tell a darker, more complicated and layered story in the context of a Facebook application. We haven't seen this done before — it's exactly the kind of experience we want on Facebook."

Why did you think it as important to do a social film?
"We believe that interactivity is becoming an ever increasingly important part of entertainment experience. We also believe social media is the most essential medium on the Internet. A social film combines these two ideas."

Can you explain how it works?
"The film tells two interwoven stories that involve an average young man living in the city — the narrative shifts back and forth between the lightness of a burgeoning office romance, and the dark, unsettling memories of a recent mugging."

"It is divided into linear video and interactive scenes. The linear video scenes were designed to look intentionally non-traditional through the use of the square aspect ratio and the multiple window approach. This approach makes a nod to computer interfaces — a reminder that this is in fact an application. In doing so this creates a visual bridge to the interactive scenes."

"The interactive scenes present a direct continuation of the narrative and utilize a viewer-controlled scrolling set of images. Some of the images are labeled; others are not. Viewers of the film are encouraged to comment on the images and then those comments are shared with other viewers within their social circle."

"The film continues in this manner, switching back and forth from linear video to interactivity. The last scene is linear, but there is a surprise at the end that further pulls the viewer into the film."

Are people getting imaginative with their comments?
"Yes, definitely. A trio of friends in London created a love triangle of their own to mirror the love-and-confrontation narrative of the film. We posted a few of our favorite story additions from within our social networks, on the Him, Her and Them Facebook page."

What's the best user comment you've received so far?
"You can only view story additions from viewers that are within your social network. I have about 50 friends with whom I'm watching Him, Her and Them. My favorite of the bunch is the label of an image of a water cooler as "what Twitter was 20 years ago."

How many views have you had to date?
"During the two weeks of our soft launch we had approximately 4,250 active viewers. After the project has been live for a month we plan to share this more detailed data on the Him, Her and Them production website. The initial data has surpassed our expectations."

Are you pleased with the success so far?
"It has exceeded our hopes and expectations. The concept is getting great traction and viewers of our film are very enthusiastic about the experience and the vision of social films."

Do you plan to do more social films?
"Yes, our focus at Murmur is to create and distribute social films. Him, Her and Them was a singular piece and was non-commercial. We wanted to keep the functionality of it fairly modest. We really view it as a proto-social film in that we were figuring out a lot during the making of it and now we are going to apply those lessons to the next project."

Will there be changes to the format as you move forward?
"Our next project will be episodic/serial in nature. Our goal is to more fully integrate social game mechanics without it ever quite feeling like a "game." The business model will follow a free/premium content approach and will hue closely to the monetization techniques developed by leading social game companies."

"We are talking with a wide range of interested potential partners now including networks/studios, talent agencies, advertising agencies, film production companies, financing partners, and investors. It is a matter of putting the right team together."

You can view/interact with the film on their Facebook page.