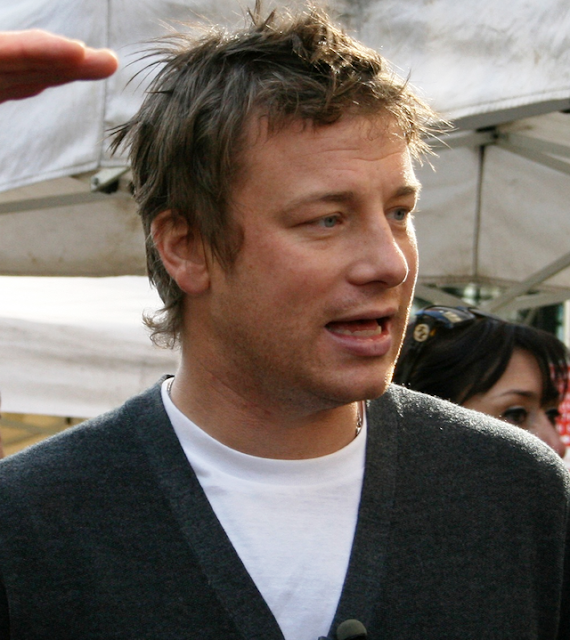 Tonight Jamie Oliver once again wages war on unhealthy diets and obesity in America on Food Revolution. In a recent conference call interview the celebrity chef talked about how things are going in Huntington, why he became an activist and how people at home can impact the change.

Oliver reflected on the first installment of Food Revolution saying, “In season one we were really going into the eye of the storm. The [Center for Disease Control] report when we researched and sort of pulled out the Tri-State area — Huntington, West Virginia. So we really went to the eye of the storm last year.”


Jamie confirmed that the changes he implemented in West Virginia are still in effect. “As far as Huntington is concerned, just to get you up to speed, everything that we set up and everything that we did is still running. And everything that is running is still being successful. And actually, they're doing even more, they're running with lots of great local things — from farmers' markets to local restaurants to fitness clubs — [Jamie’s] Kitchen is still there. It's still booked out three months in advance, which is great.”


He also revealed that the revolution has reached beyond the town’s borders, “What's really nice is the next district to Huntington has two moms [that] basically did exactly what I did and fundraised money. And they started to roll out fresh food in the schools and the neighboring district, which is twice the size, which is really exciting.”


Jamie remains in touch with some of the people who helped transform the town and they keep him up-to-date on the progress. “I’m still in contact, obviously, with Huntington's Kitchen and Pastor Steve, your local pastor. The stuff that I set-up is still running. And not only that, we've added to it the different groups. And even the local media does kind of a food revolution now. Really what I'd be most proud of is that I came and I went, but really it was never about me. It was never about me fixing Huntington, it is about Huntington getting on its own journey. And I really think that they’ve done that.”


Bringing that change to Huntington was not easy but that challenge pales in comparison to what Jamie faced when he rolled into Los Angeles for season two. Oliver was shocked that the Los Angeles Unified School District shut him out of the entire system.


The fun-loving, former Naked Chef divulged how he became the face of the Food Revolution. “I’m a food lover. I grew up in, I was born into the food business. I can't lie. I never thought I'd be doing these 15 years ago… When you are a chef on TV, and I work in about 120 countries around the world… you build up a trust to the public.”


His journey on this influential path started in his native England, where he tackled the U.K. school food system on Jamie's Ministry of Food. He recounted, “About six years ago, I did four one-hour documentaries about school food, and it just became very political very quickly. So it's really not so much that I'm anything special. It's just I've found myself in a position where when I move my mouth, it often swells the public into doing different things or buying different things. And obviously it helps if it's a positive thing.”


But according to Jamie, that doesn’t mean it’s easy to film. “To be honest, it is not the prettiest show in the world to make. It's not full of joy and bouncing around and it can be fairly depressing… When doors get slammed in your face a lot, it often it feels like you're not doing the call of service.”


Making significant change isn’t a simple task. “The one thing I’m proud of this year is genuinely, even though the LAUSD stuff was a problem and still is and hopefully we can fix it, we did get very close to the poor communities. We did get close to young teenage Americans and kids. And we did address a few other new subjects like fast food and some of the processes in the food. And genuinely, we did film some of the most important days. Some of the best filming I've ever done in my career we've done in the last few months.”


And clearly the struggle is worth the ultimate payoff. “I hope that things like Food Revolution becomes a little bit of a face for all the great people that are doing great projects around the states. And ultimately the people that are doing great things are successful. They want to roll out and do more even after success, even if it's on budget, even that’s still a problem.”


That’s one of the reasons that Jamie is plowing through with season two regardless of the walls thrown up by the School Board. He acknowledged, “L.A. is so ready for this. The public and the response from the public and the parents and the kids, they're so on board for this.”


Still Jamie confessed that despite the success of the past, he still has moments of self-doubt. “As far as the tangible physical things I was accomplishing in Huntington, I still wasn’t able to cut through in the LAUSD. Sometimes you have to question, ‘Am I doing a good job? Is this worth it? Is this the right thing to do?’”

In reaction to the obstacles imposed on the show by the LAUSD, Oliver and his team had to think quickly on their feet and approach the series from a fresh perspective. He recalled, “I think the story this year was different and it became more about spreading the word, different stories. And my reflections back to Huntington are very fond, and it's very different. Hopefully the outcome of this year were really I want to get parents to be clear about some opinions of food, and schools, and school food and school food education. And hopefully we can try and get them to make their voices heard.”

The new mission seemed to reveal itself in light of the inability to get at the kids directly through the schools. Jamie stated, “Ultimately we've got to convince people that are in-charge of businesses, organizations or school districts that the parents really want this and that they will get votes if they do the right thing. So fingers crossed.”

Bobby Flay Will Bring Us America’s Next Great Restaurant