Mary McCormack and Frederick Weller Are In Plain Sight 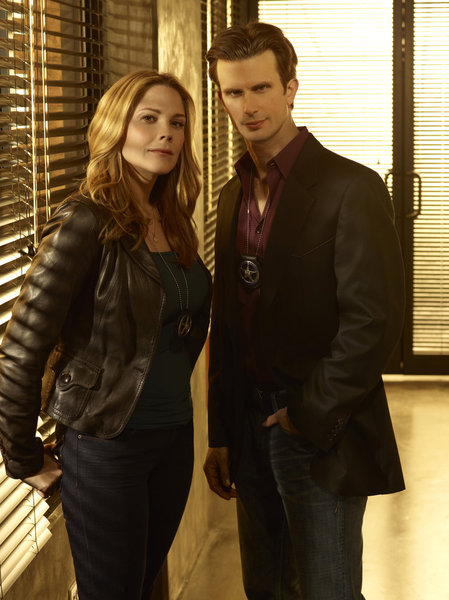 On Sunday, May 1 the USA network series In Plain Sight returns for its fourth season, with a twist. Series’ star Mary McCormack is pregnant and, as a result, her edgy character is also going to be with child. In a recent conference call interview, McCormack and her co-star Frederick Weller talked about the new storyline and what keeps the series interesting.

Mary remarked that her off-screen pregnancy is adding to the excitement this season. “The impromptu nature of some of the shifts, just makes it more interesting. We're excited.”

So are fans that continue to come back for more of Mary and Marshall’s unfulfilled love connection. Weller commented on the reason he thinks fans keep tuning in, “It's a great drama with a sense of humor. And I don't think that's a very common combination on television.”

McCormack added, “Something USA does really well is character stuff. And I think our show, even if you weren't interested in the procedural side of it, or the witness protection side of it, I think the character relationships are really rich and fresh and funny… I love reading the scenes between me and Fred or I love Paul Ben-Victor's character so much. And so I think that's a big part of it.”

And she acknowledged that the overriding concept of the series is gripping. “Witness protection just makes for exciting stories and it's a really rich place to grab stories from. People starting over completely, saying goodbye to their lives… it never ends in terms of story opportunities.”

Plus fans have developed quite a connection to the U.S. Marshals of In Plain Sight. The stars seem to still love them too. McCormack divulged that even four seasons in to In Plain Sight she still enjoys playing Mary Shannon. “I just love the character. David Maples, who created the show, just wrote a really great part. Fred's part is great too, and so is Paul Ben-Victor's. He just really wrote some three-dimensional characters. I love them. I love that Mary Shannon's really good at her job and not so good at her personal life. I like that she's cynical and sarcastic. It's just fun to play someone so grouchy. It's sort of refreshing. I can be a little bit grouchy myself so it's a comfortable fit.”

Weller admitted that he hasn’t noticed much of a difference in his now pregnant co-star. “It's funny but I haven't noticed any substantial change. I don't know if that's just more about her when she's not pregnant than it does in how she's able to handle the hormonal shift. But no apparent shift so far.”

Mary jokingly chimed in, “I started out pretty cranky.” Fred retorted, “Yes, she might have been maxed out on crankiness already.”

Watch both Marys’ pregnancies unfold on the fourth season of In Plain Sight on Sunday nights at 10 p.m. EST/9 p.m. Central on the USA network.

Stephen Schwartz at the Festival of New American Musicals
http://www.popculturepassionistas.com/2011/04/stephen-schwartz-headlines-festival-of.html