Do You Have a Taste for The Hunger Games? 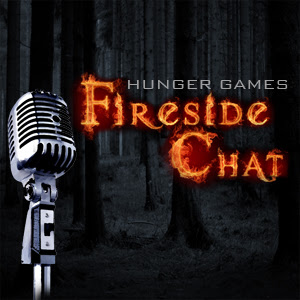 franchise wraps up this summer with the final installment of the blockbuster films. The Twilight

book-to-movie adaptations will be on screen in November 2011 and 2012. So it seems like the perfect time for young-adult fantasy fiction fans to fully turn their attention to The Hunger Games

. Suzanne Collins’ trilogy about a post-apocalyptic world originally hit the shelves in 2008. And this past Monday director Gary Ross (of Pleasantville fame) started shooting on his quest to take the first flick to the silver screen. Not surprisingly legions of fans are springing up around the world, and now they have a place to turn for all things related to the novels and the impending movie — Picktainment’s Hunger Games Fireside Chat Podcast.

In a recent interview hosts and producers Adam Spunberg and Savanna New told us about the web series. “Fireside Chat is a weekly, talk show-style podcast dedicated to all things Hunger Games. We report on the latest Hunger Games news, have intelligent and frequently hilarious discussions, play games and interview a wide range of special guests.”

They recounted how the podcast came about and has flourished with the support of Phil Wallace, Founder and President of Picktainment.com. “We came up with the idea after doing a special Hunger Games casting series with The Hob (a Hunger Games fan site) for Picktainment. We’re massive fans of the trilogy, and we found the Hunger Games community to be so welcoming and creative; as we got to know the wonderful people at different fan sites, we couldn’t help trying to organize a group event.”

The Hunger Games Fireside Chat is especially fun because it’s not pre-recorded. They explained, “Unlike most other podcasts, we broadcast live and our shows go unedited. We like to think of our shows as ‘events’ in which the entire online Hunger Games fan community can participate. Each week, we encourage people to chat on Twitter as they listen, using our hashtag #HGFiresideChat, and we always accept fan-submitted questions and discussion ideas.”

As a result they’ve been getting great support from the franchise’s followers. “The outpouring of support and enthusiasm has been more than we ever expected. Hunger Games fans are so passionate about the material, and we’ve tried very hard to give them a show they can enjoy listening to. Thanks to them, we’ve flown up the iTunes charts and hit listener totals we never dreamed of.”

In fact Spunberg and New credit Internet communities devoted to the films with making their podcast such a big success. They remarked, “Our show works because of the invaluable contributions from the Hunger Games fan sites. Every week, we are joined by The Hob and Down with the Capitol, along with frequent appearances from Hunger Games Trilogy Fansite, Hunger Games Network, Hunger Games Examiner and Sam from Mockingjay.net and IamtheMockingjay.net. We also have great relationships with international fan sites, like Hunger Games France, Hunger Games Germany and the always friendly Hunger Games Philippines.”

The Hunger Games Fireside Chats take place every Monday at 7 p.m. PST and occasionally on Fridays, as will be the case this week. The producers noted, “We will be holding a special International Show on Friday, May 27, at 6 p.m. PST because of the Memorial Day Holiday.”

And they plan on keeping the show going for quite some time. Spunberg and New admitted, “We have had so much fun putting it all together, and we have some really exciting plans in the works for the future.” That will hopefully include interaction with the team making the first movie. They respectfully acknowledged, “Of course that would be great, but we don’t want to interfere with cast and production crews while they’re filming. Later on, we’re optimistic that we’ll have opportunities to hear from them.”

So if you’re a Hunger Games devotee, or just wondering what all the fuss is about, check out the Fireside Chats live every Monday night at 7 p.m. PST at http://www.blogtalkradio.com/firesidechat.

You can also catch archived episodes at the site as well or search for “Hunger Games Fireside” on iTunes.

For other Pop Culture Passionistas interviews check out: