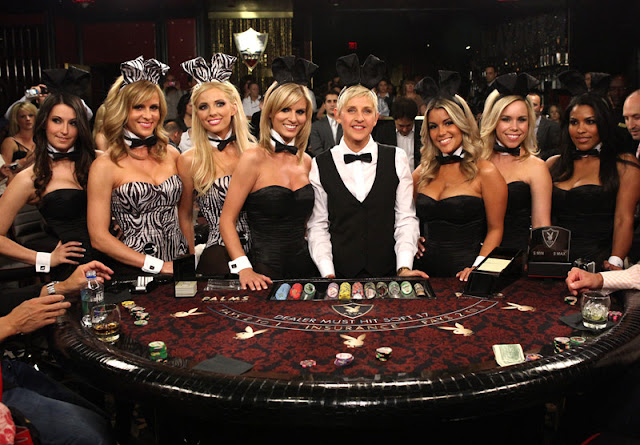 A talk show host turns Playboy Bunny for charity, a TV star pleas for the chimps and a fascinator sells for a good cause. Here are this week’s most inspirational pop culture moments.

Ellen DeGeneres was up to her old (card) tricks again — raising more money for charity. This time she hit the Vegas strip at the Playboy Club in the Palms Hotel. She donned a Bunny outfit complete with ears and cottontail, although she passed on the strapless leotard in favor of a refined tuxedo shirt, vest and bowtie.

Playboy Bunny Maxine gave her lesson in dealing Blackjack and the talk show host became a certified dealer. In her new role as a celebrity bunny DeGeneres had only one goal in mind — to raise money for two charities near and dear to her, The Gentle Barn and The Farm Sanctuary. Both organizations operate rescue, rehabilitation and sanctuaries for abused and abandoned animals. In addition to the typical dogs and cats, these farms rescue horses, cows, pigs, goats, sheep, chickens and more.

Aided by an abacus and a calculator to her help her add the face values of the cards, Ellen dealt numerous hands  of Blackjack to the Playboy patrons. She did her best to keep them winning, laughing and filling the tip jar. She even sold her ears and tail when the event was winding down. At the end of the day the Palms presented her with a check for $10,000.

Posted by Pop Culture Passionistas at 9:57 AM