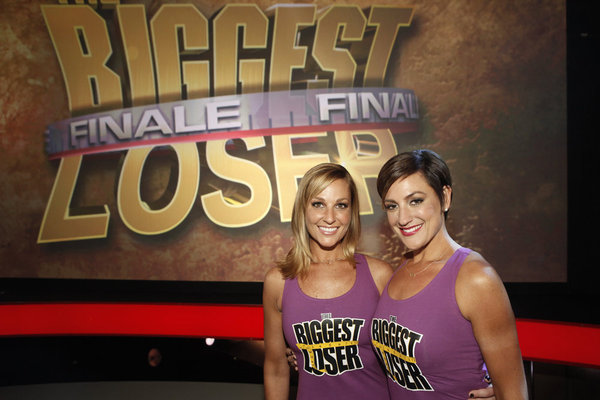 We watched the whole season of The Biggest Loser routing for the sisters Olivia Ward and Hannah Curlee because we could relate to their strong bond. As so when the pair ended up in the final three together we were so happy for them. But in the back of our heads, knowing what just a tinge of sibling rivalry feels like, we couldn’t help but wonder if they were at all competitive with each other. In a recent conference call interview Olivia, who won the title and the $250,000 cash prize, answered our questions about going head-to-head against her sister and best friend.

But she also said, "The thing that’s really special about [our] relationship is that we’re able to rejoice and celebrate with one another. And that’s important. Even though there were times that she would win things and I wouldn’t or she would do better on the scale and I wouldn’t, we would take the time to really rejoice with that person." She added that when one did beat the other on a certain task or on at a weigh in, it just encouraged the other to better the next time. "That sibling rivalry definitely pushed us through many, many times at the ranch."

The competitive spirit got even a little more intense during the last few weeks before the finale and they stopped sharing their weight loss numbers. Olivia explained, "When we first training and we left the ranch, we were open, and then it got to the end and it started getting a little competitive and we both decided, 'Let’s just let it be what it’s going to be. Let’s continue to work hard.' So we would still talk everyday and tell each other what we were doing for workouts, but we didn’t talk about the [numbers]. I had a feeling, and she felt the same way, that it was going to be a photo finish, which it ended up being, but we had no idea exactly which way it was going to go."

And while no plans are set in stone to share the prize money Olivia promised her sister would benefit from her new found wealth. "I share pretty much everything with Hannah my whole life, as far as clothes, we go on vacations together, so I definitely will be sharing all my blessings with Hannah. And I’m sure she wouldn’t object to going on a vacation or something together on my dime."

Olivia has said on numerous occasions that there is no one else she would have rather taken this journey with. "There’s just nothing like the bond of sisterhood. There just is nothing like it… We can look at one another without even speaking and have complete conversations. And so to be up there and to be looking at her and her telling me that she’s proud of me and she loves me, and knowing that’s 100% true. Looking at her and being able to reciprocate that was so incredibly special."

She continued, "It’s very, very hard to explain to people what it was like being on the ranch for so long and going through all the challenges day in and out. And I had my best friend and my family there with me every day. We shared a room. Even where there was plenty of rooms for us to separate into separate rooms we decided not to. We stayed in the same room with the two little twin beds in it for over eight months, and I loved every minute of it. So to share this with her has been one of the biggest gifts that I received at The Biggest Loser."

And it's not the last of the dynamic duo. Olivia acknowledged, "Hannah and I are so great together and our story is so unique and we have such an interesting point of view that I think people want to be encouraged and they want to hear about our journey. And so we will definitely get out there and do some public speaking and meet people and encourage people who want to be encouraged or want to learn what we’ve learned."

She added, "I don’t know exactly what kind of business that will turn into, but it is definitely going to be something we are going to very aggressively pursue and we’re really excited about that, because we love working together, and feel like there’s a lot of people who’d like to see us out there together."