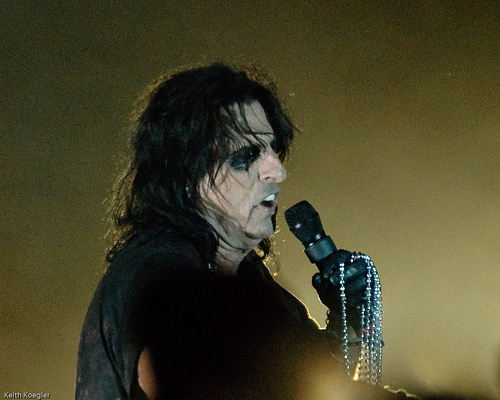 It may be the best ceremony titles in entertainment. But if that’s not enough to get you to tune in to VH1’s Revolver Golden Gods Awards, there are a few others — namely Mötley Crüe

Yes if metal isn’t your thing you might at least want to tune in to catch Captain Kirk receive the Honorary Headbanger Award, which will be presented by comedian Brian Posehn and Scott Ian of Anthrax

. Shatner might seem like a strange choice but his upcoming release Seeking Major Tom is a concept album fueled by hard rock and metal cover tunes.

. He’ll also take the stage with the original members of the Alice Cooper Group to perform the rock classic “School’s Out.”

The whole event is hosted by Chris Jericho. The WWE superstar has gained some mainstream recognition recently as a competitor on Dancing with the Stars. He might not have taken home the Mirror Ball Trophy but he did make Carrie Ann Inaba cry when he danced an emotional tribute to his mother to the Beatles’ “Let It Be.” Jericho is also the frontman for the band Fozzy

Get ready to bang your head when the Revolver Golden Globe Awards airs on Saturday night at 10 p.m. EST/9 p.m. Central on VH1.