Our Favorite Routines from So You Think You Can Dance 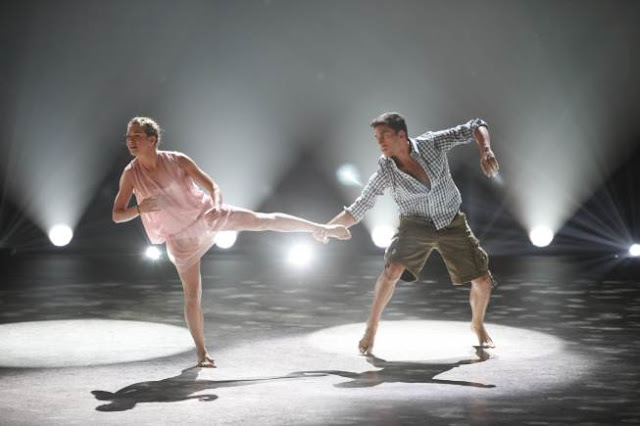 Tonight is the season eight premiere of So You Think You Can Dance. And if you believe the commercials, the talent is better than ever before. Given the quality of dancers last season and the prior years, we do find that a little hard to believe. But knowing what a great vehicle the show is to expose these otherwise unknowns to millions of fans, it only makes sense that the b-boys, tappers, krumpers and ballerinas are crawling out of the woodwork to get on the show. So while we wait to see how this year's dancers measure up, here's a list of our favorite SYTYCD routines to date.

10. Jeanine Mason and Jason Glover — "If It Kills Me" by Jason Mraz
Choreographed by Travis Wall
In season five, the runner-up from season two, Travis Wall, returned to SYTYCD to make his debut as a choreographer. His first routine was a contemporary number performed by Jeanine Mason and Jason Glover, who told the story of two young lovers sharing a passionate dance, a necklace and a kiss. Jeanine went on to win that season and Wall has become one of the show's most treasured choreographers.

9. Benji Schwimmer and Heidi Groskreutz — "Black Mambo" by Angel and the Mambokats
Choreographed by Alex Da Silva
Benji and Heidi may have had a slightly unfair advantage because they have been dancing together since they were kids. But their mambo with it's flawless lines, crisp moves and little bit of flair helped propel Benji to the title in season two.


8. Kayla Radomski and Kupono Aweau — "Gravity" by Sarah Bareilles
Choreographed by Mia Michaels
Kupono's quirkiness and Kayla's strength were the perfect combination for this Mia Michaels contemporary routine about a struggling addict destroying his partner. The powerful season five dance won a 2010 Emmy for Mia.


7. Chelsie Hightower and Mark Kanemura — "Bleeding Love" by Leona Lewis
Choreographed by Napoleon and Tabitha D'umo
Known to fans as "The Briefcase" this season four hip hop routine enacted the emotional breakdown of a woman fighting to keep her workaholic man at home. NappyTabs was nominated for an Emmy for this routine but lost out to fellow SYTYCD choreographer Tyce Dioro.


6. Sabra Johnson and Neil Haskell — "Sweet Dreams (Are Made of This)" by Eurythmics
Choreographed by Mandy Moore
This boardroom struggle for corporate power found season three's Sabra and Neil dancing around a table in a jazz routine choreographed by Mandy Moore. Moore was nominated for an Emmy for the number, Neil landed in third place for the season and Sabra took the crown that year.

5. Kent Boyd and Neil Haskell — "How It Ends" by DeVotchKa
Choreographed by Travis Wall
Season seven paired the contestants with past seasons' all-satr dancers, thus the match up of Neil from season three with current competitor Kent. In this heartbreaking contemporary piece, the two forceful male dancers told the story of two friends who became enemies. Nineteen-year-old Kent went on to take second place in the finals.

4. Melissa Sandvig and Ade Obayomi — "This Woman's Work" by Maxwell
Choreographed by Tyce Diorio
In this contemporary piece Melissa took on their role of a women fighting cancer and Ade was her support system. The gut-wrenching season five routine left every judge, audience member and viewer in tears.

3. Heidi Groskreutz and Travis Wall — "Calling You" by Celine Dion
Choreographed by Mia Michaels
Before he was choreographer extraordinaire on SYTYCD, Travis Wall was a competitor on season two. And this stunning contemporary number helped propel him to a second place showing. Known to fans as "The Bench," Travis and Heidi embraced the parts of heartbroken lovers, who ended their relationship on a park bench. Mia Michaels won an Emmy for the routine.


2. Robert Roldan and Allison Holker — "Fix You" by Coldplay
Choreographed by Travis Wall
In this stirring season seven contemporary piece Allison represented Travis' mom who had just recovered from surgery. Robert played the role of her supportive son Travis. The judges were driven to tears as the emotions poured out of Robert, who had been through a similar journey with his own mother.

1. Lacey Schwimmer and Neil Haskell — "Time" by Billy Porter
Choreographed by Mia Michaels
Mia Michaels created this contemporary routine for her father who had passed away in 2005. In it she imagined what it would be like when they are reunited in heaven. Season three dancers Lacey Schwimmer and Neil Haskell performed the piece with the perfect grace and tenderness befitting the touching tribute.

For related stories check out:
So You Think You Can Dance Off to Great Start
National Dance Day in Los Angeles