America's Got Talent Judges Compare the Show to X Factor 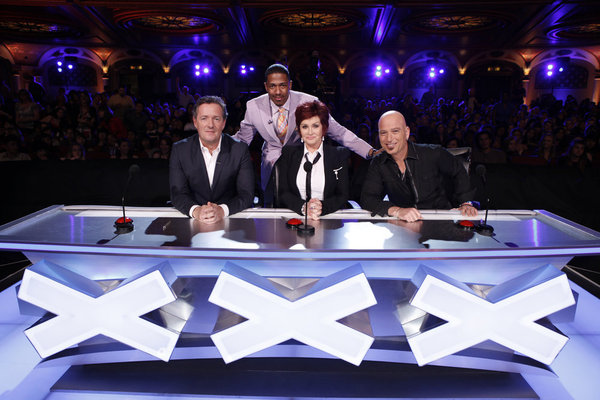 The sixth season of America's Got Talent starts next week. Some wonder if the veteran show can live up to the hype that's surrounding its newer, fresher competitors like The Voice and The X Factor. At a recent press event judges Sharon Osbourne, Piers Morgan and Howie Mandel joined host Nick Cannon and discussed what sets AGT apart from its rivals.

Some are particularly wondering if Simon Cowell's new show The X Factor will give AGT a run for it's money. Sharon, who worked on the British version of Simon's show for four years remarked, "The difference is it's just singing, and yes, the judges are mentors to those singers, but it's singing. You can't compare our show to any other talent show that's out there because the majority are all either dancing shows or singing shows, and we go deeper. It's a variety show, so it's all different shows of entertainment."

She also pointed out the big difference between AGT and the glut of other reality competition series out there, "If you think about it, all the vocal talent shows are really popularity contests. It's not about the best singer. It's about who the public gets more invested in and will that person to do well."

Nick added, "I would have to say the thing I enjoy the most about America's Got Talent is just the energy. It's the greatest summer job I've ever had in my life." He is pleased by the presence of the youth culture on the show and how it affects people around the country. "When you think about the time and the way society is and the climate of the world, to be able to be a part of something that's all about fun, high energy, and just that idea of reaching and accomplishing your dream, there's nothing else like that on television. Everything else takes themselves way too seriously. This is a show where you can just forget about the rest of the world."

Sharon's biggest challenge on the show is balancing her genuine compassion for people with her role as a judge to be critical and sometimes harsh. She related an anecdote about a 52-year-old woman who had spent her life raising her children and now wanted to follow her dream to be a singer. But Osbourne admitted, "I didn't think that she was a star, and I X'd her… Those are times when it's tough being on the show because you want to give everyone that chance."

She went on to explain, "It's so competitive out there. There's so much talent that… where I would normally have gone, 'Oh, darling, yes. Go on. Go on, and I'll give you something as well as a present.' I can't do that anymore." Mandel joked, "Sharon is always very cold hearted, and we find that working with her."

And each time a judge X's a competitor, Nick is waiting in the wings to comfort them. He acknowledged, "[For] a lot of people, this is their life. This is their dream. And when you've just been rejected or told no, your confidence is done away with. So I have to instantly turn off the comedian and go into the mode of a caregiver and let them know that I've been told 'No' all my life. I've been called an outcast. And it still happens, but you have to be a self-motivator. You have to know that this experience is only going to make you stronger, and it's building you for another experience."

America's Got Talent Is a Cruel Audition

Piers reminded potential competitors that this is a real audition. "I as a judge, and I'm sure I speak for the others, we don't really see it when we're in the moment as a TV show. We see it as a genuine audition room, and auditions are brutal… The reality of an audition process is it's hard, and a lot of people get kicked straight out much more brutally than we do it… And the winner as we've seen now a few times ends up being a huge star."

Howie did note one big difference, though, between AGT and any other audition — that there are "millions of people watching." He stated that he relates as a comedian trying to get a gig, "A lot of times in auditions we haven't been given the job, but still never on a stage like this, and I am constantly aware of this. Never in front of 15 million people are you critiqued out loud. Not only in front of 15 million people. A lot of times [Nick's] standing with your mother, so your mother is standing on the side watching you get torn apart by Mr. Morgan here, and he's got to face the mother."

But for the contestants that do get past the dreaded auditions, there is big glory at the end of the line. According to Piers last year's second place winner, 10-year-old Jackie Evancho, had the number two album in the country just six weeks ago. She was beat out for the number one spot by Susan Boyle, second place winner on Britian's Got Talent in 2009. He professed, "I'm seeing all the time the level of talent is just getting better and better. There are people that criticize these shows and say that we don't produce real talent. It's just complete nonsense. They are becoming now the place where real talent gets discovered."

Tune into the season premiere of America's Got Talent on Tuesday, May 31 at 8 p.m. EST/7 p.m. Central on NBC.

For related stories check out:
America's Got Talent and YouTube Want You
An Interview with America's Got