The Voice's Tje Austin on Cee Lo Green and Nakia 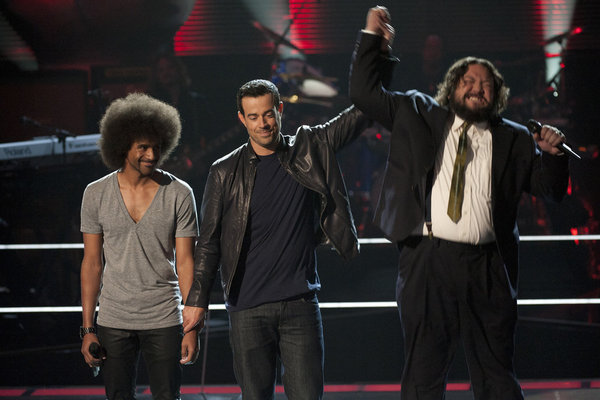 On The Voice this week, Cee Lo Green pitted two fan favorites against one another in the battle rounds. Tje Austin went head-to-head with Nakia in a duet of Ne-Yo's "Closer." Many feel it was not the best strategy for the coach, thinking he should have matched both against weaker players to keep the stronger singers around for the live performances. But he did not take that route, so in the end Tje was sent home leaving Nakia to sing another day. In a recent conference call interview Tje talked about his battle round strategy, the most important lesson he learned and who he thinks will win.

On Holding Back During Rehearsals
"We come into the game, you want to give your best performance possible. I already knew that Nakia was a strong singer and I’m kind of a mellow singer, so it’s like pairing Sade up against Janis Joplin. You’ve got this mellow tone and this huge voice. So I really wanted to see what his take was going to be on it. But my whole goal was to get up on stage and do me, sing a great song. I think we had a great duet and I think I succeeded. I got a lot of people in my corner, I did impress the judges, but they were definitely intrigued by his delivery."

On the Most Important Lesson Learned
"I guess be myself. That’s how I got on the show. They liked me because of how I sang. I learned a lot from all the other artists. I liked seeing where we all are in our careers. It was very inspiring. So what I’ve taken from this show is how great we all were, where I want to be in five years, what type of career I want to have, and I’m just glad that I made so many great friendships. Everybody is so freaking awesome. This is the best experience I’ve ever had in my life."

On Working with Cee Lo Green
"I was so freaking excited to be on Cee Lo’s team. It’s amazing to be given this opportunity to work with someone of such amazing caliber. I was constantly in awe. He’s such a great artist, a great writer and I just wanted to take something away from that. It really helped motivate me to be in the music industry, to make my own mark. What type of career do I want to have? It  was great when he said that he could see pieces of him in me. And then to meet Monica. Man, she’s beautiful. Nobody else can say that they’ve had this experience that we’ve had to be around these artists. It was just very inspiring and it just pushes me to do so much."

On Being Eliminated During the Battle Round
"Getting eliminated from the battle round is probably the hardest round to get eliminated from, because we made it through the blind audition. 'Yay, America knows who we are. Yes, finally.' And now it would be great to be eliminated by America’s choice, where they are picking me out of 16 people. It’s very hard to get eliminated when I’m just up against one guy and I haven’t even made it to the live round. It's very frustrating to get eliminated, even if it’s [against] a great singer... It’s just hard getting eliminated in the battle round when I feel that while Nakia is a great artist, he’s a great guy… I would love to know what America would have thought. So, for me that was the hardest part."

On Singing a Duet
"I enjoy singing with somebody else. I love being a solo artist, but I love harmony. That is my big thing. I love blending voices and my whole goal singing with Nakia was to try to make the best performance possible, which I really do think that we did. So I enjoyed singing with Nakia. I thought it was great. I would love to do more with him in the future because I think we have really good chemistry and he’s my friend. So the fact that we were friends and we were singing such a great song together, that was really uplifting, so I enjoyed that. I really did."

On Who He's Rooting For
"I love everybody, but I am rooting for — it’s going to be a list. I love Frenchie. I love Javier. I’m such a big fan of Javier. I went fan boy a couple times after I met him. Sara Oromchi, she’s got such a great voice. Lily has a great voice. Casey Desmond is awesome. It’s such a hard question. They’re all so great. And all four of us [that got eliminated this week], I feel like we’re going to be doing some great things in the future. I feel like we’re all awesome, so I’m still rooting for us."