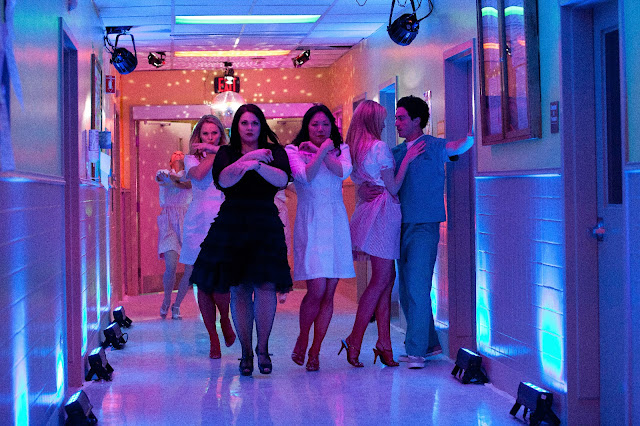 We were so excited to see Drop Dead Diva back on TV last night. And like most DDD fans, we were anticipating another extravagant production number to kick off the season. They did not disappoint, giving us Jane's dream sequence rendition of “Don’t Leave Me This Way.” And with any luck The Tyce DiOrio-choreographed opener is just a hint of things to come.

and Beauty and the Beast

as well as Taboo and The Pirate Queen on Broadway. So it's a natural fit for the series to incorporate singing and dancing when they can. In a recent conference call interview with Brooke and series creator Josh Berman, they revealed that we can expect some more music as the season goes on.

Josh shared, "Sharon Lawrence, who plays Deb’s mother, actually called me at the beginning of the season and she said it would be a fantasy for her as an actress, to get to sing with both Brooke Elliott and Faith Prince. And so we actually have a musical number coming up where the three women get to sing together and it’s just extraordinary."

And Sharon and Faith are not the only guest stars gracing the Diva set this season. Viewers can expect to see Wendy Williams, LeAnn Rimes, Kathy Griffin, Wanda Sykes, Lance Bass, Clay Aiken, Louis Van Amstel, Paula Abdul and many more. Brooke said, "We’ve been so lucky that people want to lend their name and their talent to this."

Josh noted, "I’ve never experienced this on a show before where guest stars are actually contacting us to want to be on the show. And I think that’s a real tribute to the message of the show… And also I think that these A-list actors want to work with someone like Brooke who just glows on screen and has such chemistry with all of these amazing talents. I’ve even gotten actors that have tweeted me directly asking if we would write them a part on Drop Dead Diva. And that’s so unusual, having come from such hit shows like CSI or Bones where we would work so hard to get guest stars. And then having a show on cable like Drop Dead Diva where the stars are actually coming to us. We feel really lucky."

But all DDD fans are waiting to find out the fate of Jane and Grayson. Will they or won’t they? If it were up to Elliot, they would. She confessed, "I believe that Deb and Grayson should end up together. I’m such a romantic at heart. But I believe that Grayson has to fall in love with Jane, who she is, not because he knows Deb is in that body. I feel like that’s cheating. He has to fall in love with her for who she is in new Jane."

Josh was closed lipped about the future of the relationship but did reveal, "One thing that’s interesting about this season of Drop Dead Diva, and I think it’s by far the most exciting season to date, is that Jane and Grayson see each other through different eyes this year. The puppy love that was Grayson and Deb evolved as it would in any relationship. And in this season we actually see these characters come into conflict with each other and Jane begins to question how she feels about Grayson at one point and if she was making the right decision. We deepen their relationship without necessarily making it a romantic relationship. We certainly deepen the way these characters interact and respect each other. And ultimately it’s building to a really exciting finale this year that no one will see coming. And it’s only because we bring these characters to new places."

And so if Jane doesn’t hook up with Grayson, does she find love? Brooke professed, "I love that’s happening with Jane this season. She’s a little flirtier, a little sexier, definitely more comfortable in her life. And she’s going to date some. And what I love underneath all of that is there’s this turmoil about whether she really belongs with Grayson or whether her life is supposed to take her somewhere else. If you change your circumstances you change your fate. And I love that concept. And she’s starting for the first time to maybe really question that, where in past seasons it’s been her attempt to get that old life back in whatever way she can. And I love the fact that she’s growing a bit and really having to question things and that we just don’t know what’s going to happen even though she loves him with everything in her."

Josh disclosed another love interest for Jane, "In one episode [she] will end up falling for somebody that Jane, old Jane before Deb was Jane, had a fling with. And so it’s really interesting to see in this episode, that both Jane and Deb were both attracted to the same person. And I think that was really fun for us as writers." He went on to say, "Brooke is kind of amazing because as Jane when we put her in these situations with such different men she just has such great chemistry with them. And I think that you can’t help but root for her with each one of these guys even though at the end of the day we want her to be with Grayson."

See who Jane ends up with this season on Drop Dead Diva premiering on Sundays at 9 p.m. EST/8 p.m. Central on Lifetime.