An Interview with Bryce Ross-Johnson from The Glee Project 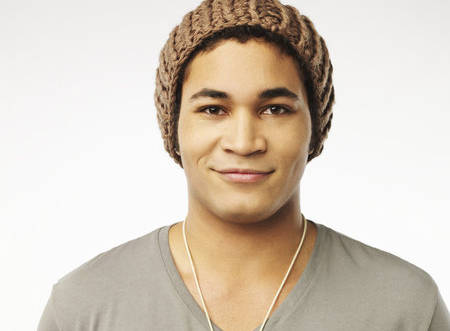 The Glee Project, the search for the next Glee cast member, started last Sunday night and, like all good reality TV, someone had to be the first to go. This time it was Westlake, California, resident Bryce Ross-Johnson. His Glee-inspired moniker was "Most Likely to Break a Heart," but it was Bryce who went home broken hearted this time. In a recent conference call interview he talked about being the first to go, the mentors on the show, what he learned from the experience and his pick to take it all.

Many viewers were shocked that the smooth, jazzy-voiced Bryce was eliminated in the first week. Bryce went up against Ellis and Damien in the last performance round of the competition, auditioning in person for Glee creator Ryan Murphy. In the end Ryan saw something more Glee-like in the other two competitors. And although Bryce felt the song chosen for him was not in his range and was very challenging vocally, he was taken by surprise when the final results were revealed. He reflected, "Looking back on the episode, no, I don’t think I deserved to be the first one going… I think a lot of people saw that or thought that it was going to be somebody else. The amount of surprise that I’ve seen or heard people say, I could understand why they would want the first person to go to be a shock. Because they don’t want you to be able to just figure out who’s going to go home every week. It has to be interesting and surprising every single week. But the majority of the people that I’ve talked to were surprised that it wasn’t Ellis."

During the audition process, contestants worked with Glee casting director Robert Ulruch, choreographer Zach Woodlee and vocal coach Nikki Anders. Bryce thoroughly enjoyed the coaching and appreciated the insight it gave him into doing the TV show. He noted, "Robert is just basically heaven on earth. He’s one of the nicest people I’ve ever met and sincere. He’s exactly the way he comes off on camera, off camera, same person. Nikki is great, too. She’s beautiful, she’s sweet, she’s great at what she does. And she’s not afraid to give you a little push or a little bit of a hard time and make sure that you do it right. She doesn’t mess around, as nice as she is, she won’t baby you."

Although he acknowledged that he did not connect as well with the choreographer Zach, "He’s [a] very interesting, entertaining guy. He’s a character himself. He could be on Glee. I don’t think he liked me too much off the bat, but I feel like we came back around a little bit [to] more of an understanding later on off camera."

Bryce, a singer-songwriter who hopes to someday get a record deal, said he walked away from this experience with many valuable lessons. "It was my first experience ever trying to dance professionally, to sing cover songs professionally and to do it all on camera for a competition… So I got a chance to really experience first hand what it’s like to have to compete against some of the most talented people in the world. I went into it on a whim and ended up learning so much about what you need to do to get noticed and stay in a competition and what it takes to be an artist."

He also has a newfound admiration for the actors on the Fox series. "Now I know what those Glee kids have to do every day. They do not have an easy job, the kids on that show. The dancing and the singing all at once and recordings, it is just a massive amount of work. So I have a lot more respect and appreciation for what goes into all that."

He continued, "There was never a moment where I felt like this isn’t what I should be doing, because I basically validated that this is what I should be doing from making it to the show. Because every time I start to get down on myself, that I’m thinking, 'Okay maybe I should try a different career path,' then something like The Glee Project comes around, something where life just reminds you that you are on the right path and to keep going."

He did reveal, though that getting kicked off the show was a blow to ego that he needed to recover from. "My confidence went back down a lot from how much it had raised getting into The Glee Project. But being there for such a short time and being the first one [eliminated], I felt embarrassed and confused for a little while afterwards. And then I took that and used it to start writing songs again. And I hadn’t written anything in over a year, which is my passion, my favorite thing to do is songwriting.  It’s what I’m best at. It’s what gets recognized the most. The song that I auditioned for Robert [with], the song that I wrote, is what he loved so much, too. And so to be able to do that again, just take everything, all the embarrassment and pain and confusion of not making it and not getting called back and getting a chance to use it to start writing great songs again, made it worth it."

So now that's he's off the show he does have a favorite that he's rooting for. "Even though it didn’t really show me being close with anybody on the episode, I was close with everyone. And I was closest with Matheus and Sam. Having said that, I think Sam has one of the best chances of winning and I think Cameron, too.

See if Bryce has picked the winner when you tune in to The Glee Project on Oxygen, Sunday nights at 9 p.m. EST/8 p.m. Central.

For related stories check out:
An Interview with the Judges from The Glee Project
You Can Audition for Glee