Sharon Osbourne Strives to Be a Better Person 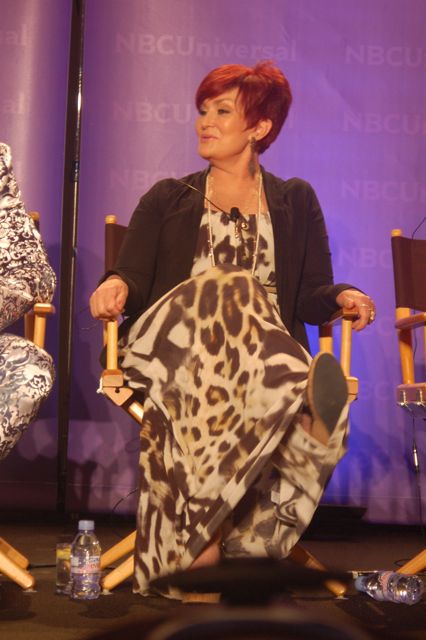 Sharon Osbourne's back for an all new season on America's Got Talent. And despite teh fact that she personally became famous on reality TV, she's getting behind Reese Witherspoon's swipe at that kind of television talent. In a recent conference call interview she talked about Reese's MTV remarks, the new season of AGT and which co-host she'd cohabitate with.

Despite her music industry background, Osbourne loves the fact that AGT isn’t all about vocals. She remarked, “The thing that I love about America’s Got Talent is, that it’s not just singing. And so the element of surprise is still there for me because you never know what somebody is going to do — the next act when they’re coming on to audition. And that’s what I love. You just don’t get one singer after another, because I think it can be a bit monotonous.”

Osbourne also appreciates the fact that performers on the show have to have actual skills. She recounted, “I listened to this speech from [The MTV Movie Awards] by the brilliant little actress… Reese Witherspoon. When she accepted her award, she said something, which is so true, that you can make it. You can be a success without making a sex tape or without being in a reality show. It’s really about talent. And it’s about knowing your craft and learning your craft and determination.”

She continued, “I admire her so much. And when she gave her speech, I was like, ‘Right on,’ because, you know what, it’s all about talent. And I think that a lot of people might make it through reality shows in the short term. You get there very quickly. If you’re successful in a reality show, you get that quickly. But ultimately you have a short career. It doesn’t last long. You have your five minutes, as Andy Warhol would say.”

Some might argue that Sharon herself earned her personal fame on the success of her husband’s mega-stardom via their reality TV series The Osbournes. She had been Ozzy’s manager but she wasn’t really a household name on her own. Still the outspoken Brit acknowledged she doesn’t plan on going down that road again. “It was great to be the first one. It was great to be the one. And you could never go back. I was there at the beginning of it all and made a mark. And that’s enough for me.”

Nor should fans expect to see her on Bravo’s ladies who lunch franchise any time soon. She adamantly stated, “You’ll never see me on the Beverly Hills Housewives because I never have been a housewife, ever. So I have always worked. From the age of 15, I have always worked. And I’ve never been a woman that spends her day deciding, ‘Am I going to go for a facial or a pedicure?’ And that is the amount of your day. So that’s not me.”

She seemed content to hang on AGT with her co-hosts, including judge-next-door Howie Mandell. Sharon revealed, “I know Howie because he’s my neighbor. And he’s just the funniest, naughtiest guy that I’ve met in years. And it just made me so happy when it was announced he was doing the show. We literally live next door to each other.”

But when asked which of her America’s Got Talent co-star she’d want to shack up with should the opportunity arise, Osbourne had a hard time picking. She answered, “That’s a hard question. It really is a hard question. Nick is a great catch but I think Mariah would beat the s#*t out of me. So that wouldn’t work. And, Piers is funny, funny, funny and… that dry sense of humor, but his wife’s pregnant right now. So I wouldn’t want to upset her by moving in. And Howie, he wouldn’t want to touch me so that wouldn’t be fun. So I’d probably stick to my husband.”

That’s good news for Ozzy. Not that he probably sees as much of his all too busy Mrs. these days. Not only is she a judge on AGT but she’s on the panel of the daytime chat show The Talk. But Sharon confessed that she’s having a hard time finding balance these days. “I mess up on a lot of things. You think that you can handle it all. And you can’t. Certain things fall through. And I’m going to have to review my next year because I definitely packed it too tight this year. You can’t do it all at the same level. Something has to suffer.”

But she has one accomplishment she’s always working on. She admitted, “As far as my personal goals in life, I’ve reached them all. I never wanted to be the head of a huge organization. I never wanted to be number one at everything. But I’ve had amazing life experiences, amazing opportunities. I’ve been blessed personally. But I strive to be a better person.”

“America’s Got Talent” airs on Tuesdays and Wednesdays at 8 p.m. EST/7 p.m. Central on NBC.

Posted by Pop Culture Passionistas at 8:41 AM