Ten Thoughts from Chris Harrison About The Bachelorette's Bentley 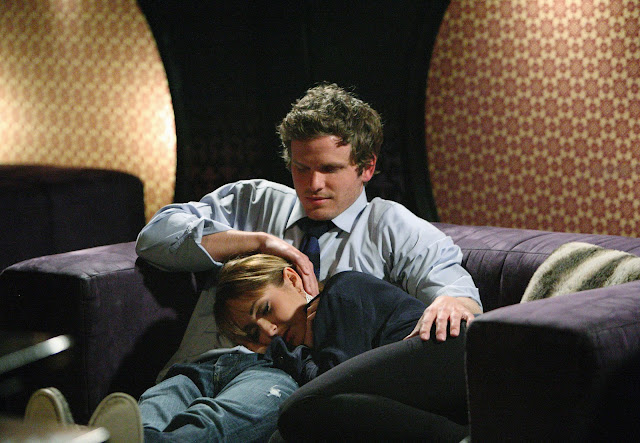 In case you haven’t heard, Bachelorette fans, the show is going to explode with drama tonight. The masked man finally reveals his face and Bentley, who has been playing Ashley Herbert like a cheap fiddle, walks off the show. We spoke with Bachelorette host Chris Harrison and got his thoughts about how all of this went down.

1. On What Ashley Saw in Bentley
"You'll see in the deliberation Monday night, it was very much not a deliberation. It was a friend walking in to pick up the pieces of another friend that is just had their heart ripped apart. And I asked her, 'What was it about this guy that just got into your skin?' And she never really could answer that… Was it the bad boy? Was it 'I want to fix him'? [Was it] the mama syndrome where you want to mother them and protect them? I don’t know. Maybe it was a little bit of all of that. I couldn’t put a finger on it. But I found it very perplexing myself… I don’t get it. He’s bad news and you know he’s bad news. He’s going to hurt you. But he was just so smooth and so caring when he was around her that she just never got to see the true side of him, his true colors. And eventually he was able to use that and crush her."

2. On Warning Ashley about Bentley
"One of the things I find fascinating about this show is I’m no longer host, I’m just a friend. And I’m about to watch somebody have their heart broken. And if you’ve ever been a grown adult, had any kind of friend who’s been in a relationship, you've seen this thing happened before. Where the person they’re dating or falling for is not good for them. And the more you scream from the rooftops and tell them, what do they do? The more they run for them. The more they defend them. The more they defend their own choices. And that’s what happened with Ashley."

3. On How He Felt Watching Ashley Go Through This Pain
"I didn’t hear a lot of the derogatory stuff. But being a friend — and honestly even if it was you and someone was speaking of you that way — I would be floored and find it disrespectful and rude and demeaning and crossing the line… It was a terrible thing to see any man or any person treat another person like that. It was just such disregard and such disrespect for her. And I found it pretty astounding. And you’ll see Monday that he’ll leave the show… but the way he leaves and the way it happened, I find even more disrespectful than the things he said before he left."

4. On the Fact that Bentley is a Dad
"I have a son and I have a daughter and I just can’t fathom treating a woman [like that]. I couldn’t fathom treating a woman like that anyway, but much less someone who has a daughter. And really hope that he comes back to the Men Tell All. Not so I can rip him apart, I just really want to hear his explanation. I’d like to ask him, 'Could you imagine a man treating your daughter like that some day and what would you think?' And I’d love to hear his response. Because I don’t know what his end game was or what his motivations were. Someone said it was just to promote his business. But I don’t see how that happened, the things he said and things he did, really crossed the line of decency as far as I’m concerned."

5. On Calling Bentley a Villain
"I think the villain thing is almost a little too cliché. You almost give them a title and it’s the role he’s playing. I don’t think that’s fair. I don’t think it does justice to the kind of guy he was on the show and the way he treated her. It almost lets him off a little too easy and pigeon holes him and it’s like, 'Oh he’s just the bad guy, he’s playing that role…' He’s a bit of an enigma, I don’t know what is in him, what his end game was. I don’t know why he was treating her like that. I don’t know why he wanted to play her and say those things. I don’t get it. Because he is a father, he has a daughter. And then to use the daughter the way he does Monday night and fall back on her and use her. I just know that Tuesday morning there’s not a person that’ll wake up and not have an opinion about Bentley."

6. On Bentley Being the Biggest Villain Ever
"I don’t know, honestly, for a couple of reasons. First I’d like to hear what the fans say Tuesday, get their opinions of where he ranks and all that. But I look at each case and I just look at Bentley and I really want him to come back to the Men Tell All… I really would like to reserve my judgment until I get more information. But I know everybody will have an opinion Tuesday… It just seems like everything was so thought out and premeditated with him. And it was only to do one thing and that was going to hurt her. And that’s something I do have a big problem with."

7. On the Rumors that Bentley Was a Plant
"It couldn’t be further from the truth… People give us way too much credit for this all the time — that we put this guy in there to draw up this drama. This really doesn’t turn out to be a good thing for Ashley or us. It got to the point where we almost had to shut down production. And we weren’t sure that she’s going to be able to move on past there. If [it] was two, three weeks later, we probably wouldn’t. I’m not honestly sure what we would have done with the show because this really makes her question everything — the rest of the guys that are staying in the house, herself, if this is going to work, if it worth it. It was really tough for her, but it was also rough for us to get her back on track because we still had to keep going.

8. On Accusations that Bentley Was Made to Look Bad in Editing
"You’ll see him on camera saying these words, saying these sentences, full sentences. You'll see him, you’ll see his face. So it’s obviously not cut and you can’t slice together when you see somebody like that… And honestly you can’t really take the things he said out of context… Obviously he’s talking about Ashley every time he says something about her. So the things he said, even in joking, they’re not appropriate. [Even] joking around, you don’t talk about woman like that. And you don’t treat somebody like that. I would love to hear what his friends and him have to say about the way he leaves the show. And the stunt he pulled as he’s leaving to me was worse than anything that he said before. I can’t give too much away but that is really what I have the biggest problem with. I don’t respect the things he said… That’s not the kind of man I am, I don’t treat women like that. But all that aside, watch the stunt he pulls at the end, and what he says and that is really what I think is the worst as far as messing with her mind, as far as messing with her as a person."

9. On The Backlash Being Directed Towards the Show
"Our fans are already upset. They haven’t seen anything compared to what they’re going to see Monday night. We’re absolutely going to catch some shrapnel, we always do. I’ll get attacked [on] Twitter, Facebook and all that. I’m already prepared for being absolutely attacked Tuesday morning. 'How dare you? How could you not protect her?' And all I know is I’ve been in this situation before, we all have, where at some point you can’t stop what’s happening… People have to realize, TV cameras and production aside, this is a real woman who is really falling for a guy who is really playing her. It happens in bars, restaurants, synagogues, churches all over the world every day. Unfortunately this happens in front of the world on live TV for her. And so I’ve talked to Ashley. She feels foolish. She hates this — that she’s seeing and hearing all these things. And yes, if she had to do it all over again she would have probably never let the guy get out of the limo. But it did happened and so you get to see everything, warts and all. I was defensive and I hated watching it happen, but it was one of those things there’s nothing you can do about it."

10. On the Rest of the Season
"I don’t want to call it dramatic or call it controversial because almost again it’s like calling him a villain. It almost makes it too easy and like the air quotes around it. And it makes it too soft and it almost makes it seem too TV and too unreal. I preface it enough that this was very real for her and it was very real for us. And you’ll see the conversations I have with her subsequently that are not your typical deliberation room. And you can tell that it’s just me and her, really just talking. And [you see] how vulnerable she is and how real she was. And so this season, from here on out, will be unlike any other because you won’t have your typical bachelorette just going on a date and dealing with things. This is a very vulnerable, real woman who is now battling with her insecurities and can she possibly put herself back out there again after this. So it’s not controversial, it’s not the 'most dramatic rose somebody whatever,' but it is so real and raw and emotional. But there’s a lot of twists and turn to come after even after this week."

For related stories check out:
The Most Dramatic Chris Harrison Interview… EVER
"The Bachelor" and "The Bachelorette": Where Are They Now?