Tim Burton from Burbank to LACMA 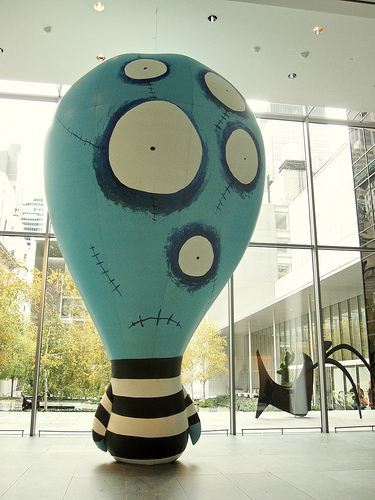 It’s only a short drive through the Cahuenga Pass from Burbank, California, to the Miracle Mile where the Los Angeles County Museum of Art stands. But a local boy took quite a journey to get from the Valley to Hollywood to his current exhibit at the world-renowned creative mecca. Fans only have to look at the opening shots in Tim Burton’s film Edward Scissorhands to get a sense of what the uniformity of his childhood environment was like. But out of that homogeneity blossomed a brilliant talent so out-of-this-world that it’s sometimes hard to imagine that he’s from this planet, let alone the ‘burbs.

Burton officially began his artistic career as a California Institute of the Arts student with a scholarship from the Walt Disney Studios. Then he had a short tenure at the Mouse House as an animator and conceptual artists on films like The Fox and the Hound

before he was allowed to explore his own unique creative voice.

His two short films, the animated Vincent and the live action Frankenweenie

, kickstarted an unparalleled career as a director and producer that would include everything from blockbuster megahits like Batman

to visually stunning cult classics like Mars Attacks. His storytelling and imagery are influenced by the likes of Edgar Allen Poe, German expressionist movies and Roald Dahl, but his ultimate vision is like no other.

Now fans can see a retrospective of his artistic career from early rudimentary sketches to vibrant paintings and sculptures to props, maquettes and costumes from his most famous movies. The exhibit, which originally was housed at New York’s Museum of Modern Art, opened at LACMA last week and will run through Halloween of this year, fittingly enough. Like so many opening nights of Burton flicks, tickets are going fast but can be ordered online at the museum’s official website.

If you can’t make it out to L.A. for the exhibit, check out the web gift shop, where you can find cool stuff like the official Art of Tim Burton book, posters like “Three Eyed Clown” and “Stain Boy” and even a yo-yo featuring a design by the artist. And if you're so inclined, you can even share your own Burtonesque art on on Flickr.
Posted by Pop Culture Passionistas at 2:00 AM