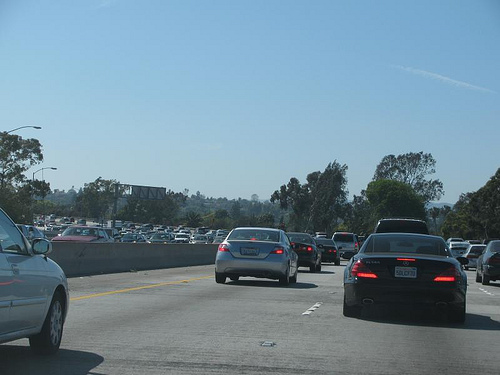 It isn’t every day that we get fair warning when disaster is about to strike. Earthquakes cause cities to crumble in an instant. Tsunamis devour entire villages in a flash. And fires indiscriminately ravage forests and homes in no time. But this time Los Angelinos have had months to prepare for perhaps one of the most terrifying catastrophes in modern history — CARMAGGEDON.

Brace yourselves and make sure all small children are out of the room before you read on. Here’s what’s going to happen in Southern California over the weekend of July 16 and 17 — the city is shutting down ten miles of the 405 freeway for construction. Breathe. Breathe. It’s going to be okay. We promise.

Granted the stretch of highway between the 101 and the 10 is at the heart of L.A. and this means that people from the East side should avoid making plans to go the beach that weekend, but really, Carmaggedon? Not since the Y2K build-up and Harold Camping’s End of the World proclamations, has a fiasco seemed to forced… and potentially uneventful.

True, hospitals have already started to panic about routes for ambulances. That’s a tricky one. But can’t people in Santa Monica go to near by St. John’s, while Tarzana resident’s can swing by Encino Hospital in an emergency during those two days?

Yes, it’s a bummer for the young Marina del Rey couple, who have planned the nuptials for that Sunday. And out of town art lovers won’t be able to visit the Getty Museum at one of its usually busiest periods. But a vehicular Armageddon? We think not.

If you live in in these parts, you know that the TV news and freeway warning signs have been “ringing those bells,” like Sarah Palin’s Paul Revere, for months. But the L.A.P.D. is frightened that not enough people are getting the message over antiquated television airwaves. So they’re trying to implement a far more high tech solution.

On June 30, the local police force issued a public plea to celebrities like Lady Gaga and Demi Moore. In fact the force has reached out to over a hundred celebrities — targeting big names, who have over 500,000 followers each — to help spread the word.

So far the social networking effort has been a bit of a bust. To no one’s surprise Ashton Kutcher was the first to jump on the bandwagon. Not unselfishly he joked:

LA friends have you heard about Carmegeddon? The 405 will closeon July 16 &17. Stay at home preparing for The Captains on 7/21on Epix. MBB

The Captains is a Shatner produced documentary about all people who have helmed starships in Trek TV shows and movies throughout the years, which premieres on cable that week.

In the meantime Erik Estrada used the platform to remind people he exists, filming a commercial in both English and Spanish to warn locals of the impending doom. Will this be the CHiPs’ actor’s Dancing with the Stars, catapulting him back into the collective consciousness and helping him land his own reality show? Unlikely.

But we believe that this Twitter thing has some merit and we’d like to present a Band-Aid that could benefit everyone. Here’s our idea. Conan O'Brien has launched an initiative to have the abandoned, overgrown block Raymer Street in Van Nuys, California, named after him.
But Major Antonio Villaraigosa has thrown down the gauntlet over O’Brien’s land request, which rests just three miles north of the starting point of Carmageddon. The city’s head honcho took to Twitter himself, teasing:

If @ConanOBrien really wants a street, he has to serve LA before I’ll consider it! What volunteer work should he do? @TeamCoco #ConanBlvd


So how's this idea, Conan can start spreading the word about Carmaggedon to his 3,356,307 Twitter followers for the LAPD. After all when he left the "Tonight Show," his loyal fan base all but secured him a new late night deal. With Conan's appetite for street sign glory and Villaraigosa's ability to dangle the carrot he’s dying to chomp on, the city's traffic problem might have a solution.

Until then, the website BeatCarmageddon.com is offering up solutions. They’re directing drivers to an interesting sounding app called Waze, which bills itself as “a social mobile application providing free turn-by-turn navigation based on the live conditions of the road.” The more people who use the technology, the more available data and the more accurate the results. Sounds reasonable.