Who Is Darren McMullen from Love in the Wild? 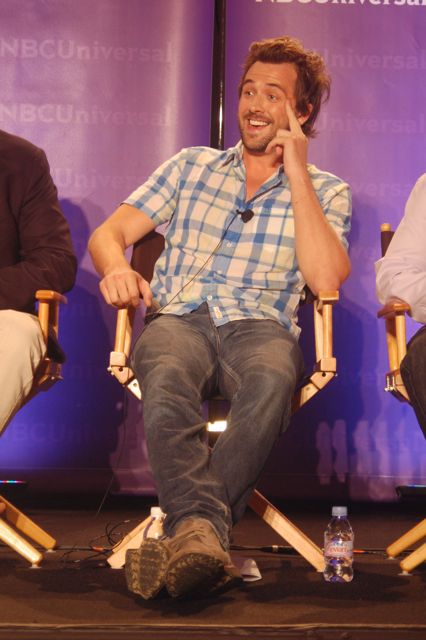 By now most people know the premise of the new reality dating show Love in the Wild. A group of singles are thrown together in the jungle and put to grueling physical and mental challenges — and tests of their burgeoning relationships. Yes it’s The Bachelor meets Survivor. But not many people know anything about the show’s Chris Harrison meets Jeff Probst host, Darren McMullen. In a recent conference call interview, the TV personality told us where he got his start, how he landed on American TV and what it’s been like working on Love in the Wild.

McMullen started by giving us a little background, “I'm originally Scottish and I moved to Australia when I was a teenager and I finished school there. And then I was a bit of a corporate whore, I like to call it. Monday to Friday nights at 5:00, suit and tie. And I thought I was going to go down that path, and own a bunch of Fortune 500 companies — not one mind you, a bunch.”

He soon soured to the business world, despite the fact that he was quickly ascending the ladder to success. But Darren’s creative side was going untapped. So as he recalled, “I had a ceremonious burning of all my suits and ties and I took off 'round the world and I just kind of did a bit of soul searching. And I was somewhere back in Scotland actually, I was waking up every morning watching this kid's show and I was setting my alarm to do so because I'm not a morning person at all, and I was like, ‘Why the hell am I watching this? I mean I hate this show.’”


He didn’t like the series, but he was drawn to the talent. “I realized it was purely for the host. He was edgy, he was raw, he was making mistakes — it wasn't fake it was a real guy on television. I thought, ‘Wow, I've never seen that before. I want to do that. I want to be a guy that people tune in just to watch. It doesn't matter what show I'm doing.’”

Darren returned to Australia and was barely scraping by when he met with a local agent who wanted to charge McMullen for his services. The wanna be host turned down the offer and went out to his car to a disheartening surprise, “I walked out and had inadvertently parked in a bus zone and I had a $175 parking ticket. And I was like, ‘Oh my god.’ I was almost in tears. I'm like, ‘This is a stupid idea. I'm going to go back and buy a suit and tie and get back into the corporate world.’”

But as often the case, fate intervened. Darren recounted, “I got a phone call the next day from that terrible agency saying, ‘You said you want to be a TV host, yes?’ And I was like, ‘Yes, I absolutely do.’ He said, ‘You know anything about cars?’ I said, ‘Absolutely nothing. But I'll do it.’”

The auto show was called Ignition and it was the beginning of McMullen’s career in front of the camera. An entertainment magazine show he helped develop called Exclusive followed. And then he moved on to projects at MTV and ultimately to the Aussie version of Minute to Win It.

He reflected on that time in his life, saying “I was actually living in America by that stage. So I had rather a long commute to work. Because America was always where I wanted to be — not just for work but I have always felt at home here. I love America and they tend to love people with accents, which is great.”

But Darren was actually in Australia when he got the fateful call. “Murphy's Law, living here so long — for a year and a half — and I went back because my dad was sick and I got a phone call from my agent, ‘You've got to come back and audition for this ‘Love in the Wild’ show.’”

Putting family before work, Darren couldn’t return to L.A. so he shot a tape and sent it back to the States. But his audition did not go smoothly, “So I remember I found a forest in Sydney, well a couple of trees anyway. And I got my friend with a camera… and I was like wading through the trees… and I got bit by a spider. And I started freaking out. And the next thing you know my leg's just swelling up.”

Luckily the arachnoid wasn’t one of the many deadly varieties that live Down Under and producer’s liked his tape despite the mishap. And McMullen got the gig. Get to know Darren when Love in the Wild airs on Wednesdays at 10 p.m. EST/9 p.m. Central on NBC.

Posted by Pop Culture Passionistas at 9:20 AM