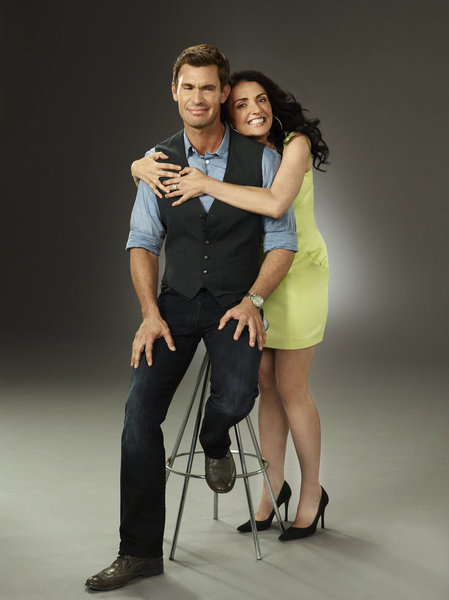 This season on Flipping Out, Jeff Lewis is making the full on transition from house flipper to interior designer. In a recent conference call interview Lewis and his trusty Executive Assistant turned COO, Jenni Pulos, talked about the career shift, how he describes his aesthetic and some of their recent clients.

The word’s most famous house flipper talked about making the transition to his new occupation. “The bigger impact was when the market fell and the flipping business came to a complete screeching halt and I had to start working for clients. And I didn't have the money that I had in the previous years. That was really the biggest dose of humility. And I think that's what gave me a little bit more empathy and little bit more sympathy for people… When I look back and it was probably one of the best experiences that now, that I'm out of the woods. It was probably one of the best things that happened to me.”

This work has led him from La Jolla, California to Chicago, Illinois. Lewis expounded on the Windy City gig, “I've been talking with a company about doing a restaurant there. A big rooftop, bar, restaurant. And I'm trying to work that out with my schedule. I could potentially be spending a lot of time in Chicago.”

Lewis described his sense of style, “I definitely lean more contemporary and my looks are definitely more streamlined. And I like big open spaces. I don't really like a ton of furniture. I'm not one of those people that over accessorizes.”

He even offered up some advice about dealing with expensive interior decorators, “Let me tell you just a little trick of the trade that designers do which I don't. And that is, I work out a different fee structure. So I don't mark up everything that I buy for my client. The reason that you'll see a lot of homes that are over accessorized and over furnished. And they hang something on every single wall and they put something in every corner. Well, news flash, here it is. They mark up every single thing they buy. They have a vested interest in over selling furniture and accessories to you.”

So Lewis passed on words of wisdom to unwitting homeowners. “What I would suggest to you is you work out a flat fee with a designer or an hourly. You don't want to do the mark ups because… not all of them but a lot of them, obviously, the more furniture they sell you the more money they make. So that's why you're seeing when you open up these magazines and you say, ‘My god, I can't even walk around that room.”

Not over accessorizing is one reason that Lewis is able to work with people who have a limit on their price range. Jenni pointed out that fans will get to see that when Flipping Out returns, “This season on the show there's some clients that Jeff works with that have a really limited budget and there's beautiful reveals with those.”

Viewers will also get to see the completion of one of Lewis’ ongoing projects — The Chaz Dean bungalows in Hollywood. Pulos added, “Our bigger client reveals, like Chaz, if you've been following the show, the studio, the salon in Hollywood. So we have a lot of different ranges this year, which is exciting.”

Lewis described the scope of the work that his business does, “We have clients with $30,000 budgets and we have clients with $2 million budgets. But really anybody can walk in the most expensive stores on Robertson in West Hollywood and beautify a space. If you have no budget, that's easy. What's difficult is taking a $30,000 budget and making three rooms look beautiful. And not just furnishing them but painting them and putting in moldings and putting in floors and wallpaper. And there's two projects this season that you wouldn't believe what I do for 30 grand. And that's really, that's what takes some skill and talent. Otherwise if you have no budget. Anybody can make a space look beautiful.”

As for ways to decorate for the summer Lewis commented on a growing trend, “The most popular color I'm seeing is gray, specifically the charcoals…. God I remember in the ‘80s when we would just go in and spray everything white. And ironically that's kind of what's happening right now. Everything is white and gray, white with gray accents and black accents and I'm seeing a lot of polished chrome and a lot of glass. And what's interesting to me in the last probably eight years, six years it doesn't matter what the exterior of their homes are. They are wanting a contemporary blend. And that's actually good for my business because that's my aesthetic.”

Contrary to what people might think, being on television is not always good for Lewis’ business. Lewis admitted, “I do have a lot of clients. And I would say that at least half of them don't want to be on TV. So that actually creates a little bit of a problem for me. Because I have to push them back to when we're not filming or I have to see them only on weekends and evenings. So actually I end up working longer hours and more days to service these clients outside of the filming. Because we film from 9:00 to 7:00 everyday. So that's the only thing that's a little difficult. But otherwise in regards to this being on the show has helped my business tremendously. I mean it's given me a platform and exposure that I could never, [ever] afford.”

See who Lewis fires and hires this season on Flipping Out on Wednesday nights at 9 p.m. EST/8 p.m. Central on Bravo.

The Most Dramatic Chris Harrison Interview… EVER
"The Bachelor" and "The Bachelorette": Where Are They Now?