Cedric Entertains on It’s Worth What? 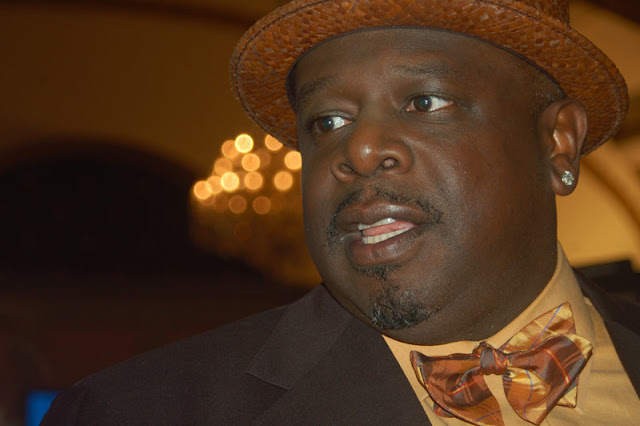 They've finally done it. They turned watching Antiques Roadshow into a competitive sport. On the new game show It's Worth What?, hosted by Cedric the Entertainer, contestants compete to guess the value of objects in a chance to win $1 million. The items range from iconic clothing like a Princess Di dress or one of Elvis' jumpsuits to oddities like to a prehistoric skeleton or an original Iron Man comic book.

Players take part in games such as putting items in order of value, matching an item to its price or selecting the more costly of two weirdly related items. It's like The Price is Right

on steroids. In a recent conference call interview host Cedric the Entertainer discussed the most memorable moments and contestants so far and what sets the show apart from similar games.

Cedric described the event that has stuck with him the most, "We brought out a live elephant in [comparing] the price of keeping a live elephant versus [the cost of an] elephant-sized diamond. And I actually fed the elephant an apple. And then I taught the elephant how to Dougie, which is a dance."

But Cedric does not just interact with the animal guests. His main job is to keep the contestants energized and moving forward toward the $1 million prize. The game is played by pairs of competitors who have some relationship to one another, though not always expected ones. Cedric explained, "You find these really cool combinations, people who’ve been best friends for 40 years and worked together or coworkers. And so you find yourself kind of getting involved. We had one great [pair] where it was the landlord and tenant in one of her buildings. And their age difference was so fun to watch that you become involved. Because the older land lady who had lived life she just was c’est la vie about everything… And the little young girl was like, 'I need this money.' And you could just see their personalities crashing. And it was hilarious. He noted that his job was "to keep everybody understanding that we’re playing a game and let’s keep it cool."

Cedric also talked about another pair of contestants he found entertaining, "It was a young couple in there. There was a young guy who married a woman I believe that was 12 years older than him. But they were a cute couple, they had a really fun relationship. And he was a DJ and she met him at the club and they just got a kick out of each other. They played the game with great energy and it was a lot of dancing and running and it was hilarious… And he had some dance that he would do whenever they were excited around the house. And then if he did it, she was like, 'Baby you've got to do the dance, you've got to do the dance.' And he was like, 'I can't.' And she was like, 'If we win this next one you've got to promise to do the dance for me.' So they won the next one and he jumped off the stage and started doing this little freak daddy dance. I was like, 'That's really personal. You all might want to keep that at home.'"

Cedric also described one of his favorite segments on the show. "Celebrity Inflation is a game that is based off what someone has paid at auction for one of these items that belonged to a celebrity. This is where you find out when people have real dedicated fans. I mean we had a toilet that belonged to John Lennon on the show, that I believe sold for $35,000 to somebody. John Lennon's toilet, really?"

As executive producer he said his contribution was bringing the items used into a modern timeframe. He pointed out, "It was easy to go and find old school items. The show was taking on a Antiques Roadshow/Pawn Stars energy, where there was a lot of things that people would know. It was expensive diamond necklaces that belonged to royal families and those kind of things. And I wanted to bring in elements that brought a modern day feel to it."

He continued, "The great car auction company Barrett-Jackson brought us really cool automobiles to bring right out on the stage. We had some rims that had diamonds all around it, that somebody could put on their car, but these rims were $40,000 a piece or something. So I encouraged making the show both modern and old school. And so we have this really cool combination now of being able to look at things that people will find really interesting today as well as some of those old classic antique items. And so those are the elements that brought the show up and made it interesting and different."

And although the show seems to have elements of The Price Is Right or Let's make a Deal to it, Cedric promised it is unique. "It has a really cool element of play along. That's the one thing that is really exciting about this game. Of course I'll bring a sense of humor and a different brand of hosting to the show. But what I've found to be the fun part about this game is that you become engaged pretty early on, just because most of us have this thing where we think we would have an idea of what things cost. Or you would, 'It's no way that those shoes would be more than that jacket.' And so you end up getting involved. And that's going to be one of the key elements of our game is that it's a good play along game when you're at home."