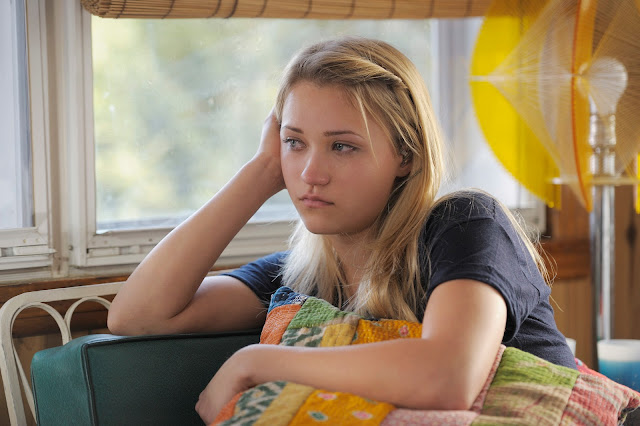 ), tells the story of a young girl verbally attacked so viciously on an Internet social networking site that she falls into a deep depression. We spoke with Osment about the film and her anti-bullying efforts in an exclusive interview.

As an actress Emily was drawn to the role for the depth of the part. "Of all the other character's I've ever played, she's the most dramatic, definitely. And she's the most tragic and she takes a journey and she definitely has the biggest character arc I've ever seen. So it was time to jump into that with both feet and hopefully land in a place that helped me gear up for two months of depression and suicidal behavior."

She continued, "I think it's extremely important to try to create awareness of the cause. And [it] allowed me to express myself and be creative and to do what I love as well as raise awareness of cyberbullying."

She hoped kids watching the film will take away one message, "The most important thing is that you need to learn that you're not alone. While watching this film you get to see my character, Taylor, who truly is so insecure, she's ready to be pushed off the edge. She comes from a broken home already and then the cyberbullying is the last straw. She doesn't know how to handle it. She doesn't know who to talk to. And you learn by watching this film what she goes through, the incredible journey that she takes. And eventually she gets on the upswing, but she's on a downward spiral for most of the show."

Emily also noted, "It's a great movie for parents because a lot of the time parents don't know how to deal with a kid if they're being bullied and they don't know what to say and they don't know how to help. And I think it's a really good cause. And I think this movie is going to be very impactful, especially for ABC Family. I don't think they've ever done anything that's this dramatic before. It's very intense. I don't think people really expect that when they watch it."

The actress also joined forces with other ABC Family stars to take part in a campaign called "Delete Digital Drama." She explained, "[It] is a really cool campaign that Seventeen magazine and ABC Family are teaming up to do. It involves a lot of stars from all of the ABC Family shows and also my film Cyberbully and they got us all together and we spent a whole day talking about it and we spent a whole day taking little videos to raise awareness."

The actress also Tweets and posts on Facebook on an almost daily basis to point kids in the direction of resources. Emily pointed out, "It's really ironic, I'm using the same format that these bullies use to bully to talk about bullying. So I'm using Facebook and Twitter for good. I get to reach out to over a million people everyday on Twitter and enlighten them with what I feel about cyberbullying and I what I think you can do to avoid it and the places you can visit online that are safe."

She talked about one of these sites that she is involved in. "StompoutBullying.org truly is for kids who are being bullied and you can talk about it and you can express your feelings and what you're going through." She added, "All these kids are going through the exact same thing, they're being picked on by other people. And hopefully that will give you an extra kick of self-esteem to help you get through your day at school or at home or wherever it may be happening. We're just trying to truly delete it at 'Delete Digital Drama.' We're trying to get rid of it."

Emily said she feels like she is a kind of ambassador for these kids and is excited to be involved. "I've got a lot of hands in this pot when it comes to cyberbullying and I think that we can truly make a difference."