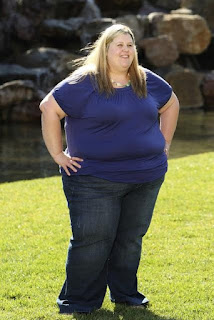 
As we often hear so many of our physical issues manifest from deep within our souls. Take for example, severe weight gain. More often than not losing the extra pounds can’t be achieved without shedding some emotional baggage, too. In a recent exclusive interview we spoke with Staci Bridwell, a participant on the first season of Extreme Makeover: Weight Loss edition and she shared her journey, telling us not only how she ended up at 456 pounds but what she had to examine about herself to shed the weight.


Staci acknowledged that she’d struggled with her size all of her life. She recalled, “Even as a child I was always bigger. I remember going to the doctors, to a dietician, at ten years old having to do food journals because I was already 20 pounds over weight at ten years old. And from about 13 to about 15 I gained over 200 pounds. I was 350 pounds by the time I was 15 or 16 years old. So my whole adult life, all my teenage years, I’ve always been obese.”


And being overweight had stopped her from doing some fairly surprising things during the course of her life. Staci revealed, “I even had to go shop around for different schools because the colleges I wanted to go through to the, this was before all the online classes and things, they didn’t have chairs that would hold me. The desks and everything were just too small. I even dropped out of high school because I was too big for the desks and I was too embarrassed to ask for another option. So, yes, it held me back from quite a bit.”


But despite the major impact her size had on her life, the issue went pretty much not discussed at home. “I tried to ask my mom a couple of times now since doing this process, because when you’re that big you shove it all inside. It’s so embarrassing and humiliating. You don’t like to talk about it. And since I’ve been going through this process, it’s been like therapy ‘cause I never talked about it and I was so open during all of this.”


Staci described her mother’s reply, “She said, ‘Well I had tried so many diets with you and nothing ever seemed to work. We just thought there was something wrong — something genetically wrong that they couldn’t find that you were that big.’ And that was her excuse... I’m like, ‘Why didn’t you just go on a walk with me?’”

Now Staci realizes that she must take much of the culpability on herself. “You can’t just blame your parents. I had a lot of responsibility in that, too. I was a fast food junkie. That I was all I ate all the time was fast food.”


Discussing the situation with her mother after all these years, wasn’t easy for Staci. She admitted, “I was terrified. I was bawling my eyes out when they asked me to do that because it’s my mom and she’s the one that’s always been there for me. And I didn’t want to make her look like a jerk on camera or like a bad mom because she has always been there for me and always supported me in anything else that I wanted to do.”


Her mother didn’t react well to the situation either. Staci recounted, “It was really hard and she thought I was faking it. She was like, ‘Why are you doing this?’ She’s like, ‘You’re gonna do this right now? On Camera? You’re gonna do this?’”


But the floodgates opened, “Once it came out it just all started coming out. And it was really difficult and I felt really horrible.” The fact that it was in such a public setting made it harder but as Staci said, “It had to come out and I’m glad it did. And we’ve gotten past it and we have a better understanding of each other now. And she’s even trying to lose weight and wants to get tips from me. It’s really great.”


Staci wishes that a couple other members of her family will be able to gain something for her experience. She talked about what she wants her daughters to learn from her journey. “What better example to set for your kids than to be a strong, healthy mom. I just hope that they learn that it’s not all about appearance and just because you’re heavy it doesn’t mean there’s something wrong with you. And I really hope that I’m able to teach them now how to eat right and how to exercise and maintain their own weight so that they can grow up healthy and not have to go through everything that I went through as a teenager and as an adult being that overweight.”