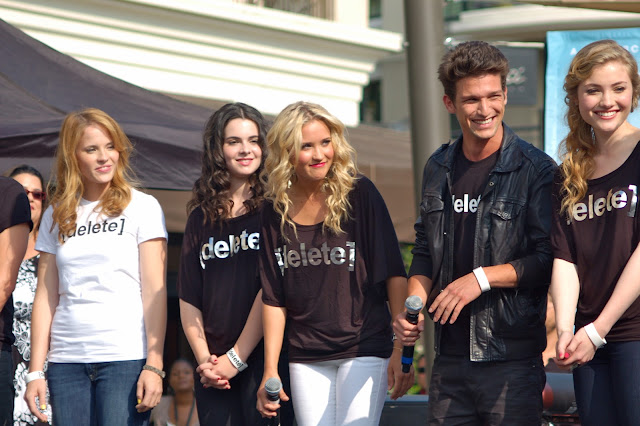 
Last week some of the stars of ABC Family's most popular shows gathered to give their support for Delete Digital Drama. The initiative, which was started to spread awareness of the growing epidemic of cyberbullying, was created by the network in partnership with Seventeen magazine. Emily Osment from Cyberbully, Vanessa Marano and Katie LeClere from Switched at Birth, Tyler Blackburn and Shay Mitchell from Pretty Little Liars, Skyler Samuels and Grey Damon from The Nine Lives of Chloe King and Daren Kagasoff from The Secret Life of the American Teenager have joined the campaign to help kids overcome digital abuse. On Thursday, July 14 in Glendale, California, they gathered to greet fans and spread the message the bullying is not okay and that it can be stopped.

Kids have been bullied (probably) since the beginning of time. Most people have experienced it in their lives. Tyler Blackburn pointed out, "Everybody experiences bullying in some capacity and it really can break you down as a person. And in this day and age we should be helping each other, building each other up."


But with the advent of the Internet, there is more anonymity, making bullying even more widespread. Emily Osment noted, "Because we have platforms like Facebook and Twitter and MySpace it's easier to be accessed. It's easier to spread hate. It's easier to become a bully and people don't know that. They could be a bully right now and they may not know."

Katie LeClere professed, "I was bullied as a kid and picked on and made fun of and it really at the time felt like you're all alone in this and it's really, really cool to be a part this and to show support for not encouraging that type of behavior."

But bullying doesn’t just happen to teenagers. Grey Damon conceded, "People still say things about you, especially when you're in the public eye, which I'm okay with. But when you're younger it can be more hurtful."

Grey's Chloe King co-star Skyler Samuels also still faces issues online herself, "I actually opened a Twitter page about a month ago for the show, talking with fans and what not, and it's been really great. But I've encountered cyberbullies. People have commented meanly or said nasty things, but I've learned cyberbullies — they're cowards. You've just got to push them aside."

Shay Mitchell went to high school in the days before online social media but still was bothered by the mean girls. She acknowledged, "They were obviously insecure with themselves, and that is what I realized after. But online it's even crazier. You say one thing and it spreads like wildfire. So we have to be really careful with what we say about other people and the things that we post online ourselves."

Vanessa Marano joked that acting is just being paid to be bullied and get constantly rejected. But she related that the two feelings are similar. "It's not cool when people don't like you. You don't feel good about yourself. But if you like you and if the people around you — who you really, truly love and respect, your parents, your siblings, your true friends — if they are okay with you… then that's all you need. Who cares what everybody else in the world says, because you have your people."

And that was the advice all of the stars handed out. Be yourself. Be strong. Talk about it. And get support. Shay pleaded, "Speak up about it. There [are] so many different support lines and outlets out there that are wanting you to call them and help you out with it. But [don't] keep it bottled up inside. Speak up about it."

They also wanted teens to know that being vocal about bullying does not just mean when you are the bullied. If you see someone else being picked on, defend them. Katie recalled, "When I was going through my struggles there was one boy who stood up and said 'Why are you doing this?' And that was the only question he asked, but to me that made me feel like I had an ally in this dark place I was in. And I hope that the people who are here today know how wrong it is and I hope that they have the courage to step up."

All of the stars would like to see the rally have a positive affect on the teens in attendance. Skyler reflected, "I really hope that everyone here today can learn to think twice before they post so they can avoid being cyberbullied or in fact prevent themselves from being cyberbullies." Shay added, "Don't write another mean comment after the one you just read, even if you think you're joking, it really hurts. So delete it and don't participate in it."

Daren Kagasoff encouraged kids to use social media wisely, "There's plenty of ways to use it proactively, whether it's promoting something or putting a good Tweet out there or something, like a quote, good messages." Grey agreed, "It's great to show your friends pictures of beautiful things that you've seen, or exciting things, but the main thing is to think about if it is hurting anyone… Don't post it. Don't put it down."

Emily wrapped it up saying, "We need to end cyberbullying and this is where it starts. We've started to draw attention to it and we've got a lot of people here so that's good."

To see a slideshow of the event visit Examiner.com.

For related stories check out:
Emily Osment Talks About CyberBully
Skyler Samuels Gets Tough on The Nine Lives of Chloe King