An Interview with The Voice Winner Javier Colon 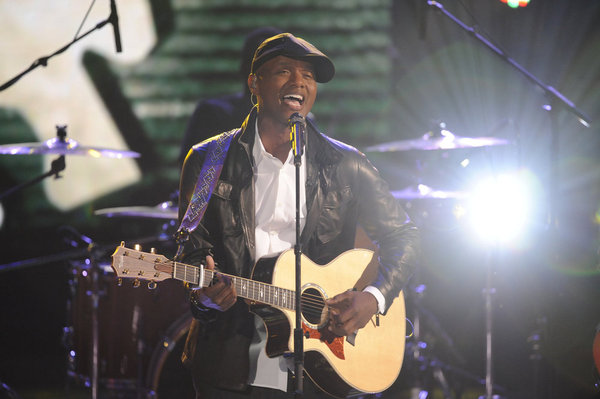 The first season of The Voice is over already. It came and went too quickly if you ask us. But in the end Javier Colon took the crown. We were happy to see him win, although we really felt all four of the final contestants — Beverly, Dia, Vicci and Javier— were all worthy of the title. Still Javier got the votes and now it’s time to see what happens next. In a recent conference call interview he talked about his future plans.

Colon is no stranger to the music business. In fact he even had a record deal earlier in his career, but without the proper support behind him it fell flat. Still he can’t help but think this go round he's in the right place at the right time. "There was a Voice wrap party that they had for us, which ironically was just right across the street from my old record label, Capitol Records. It was very strange to get out of the limo and go to walk in and then I look across the street and there was the old record label that I was on, the iconic Capitol Records building."

He continued, "It was a great, great night. We had a really, really fun time. We did some performances with some of the guys from The Voice band that are so amazing… We sang some Journey and Cee Lo got up there, Vicci got up there, Nakia, Curtis Grimes. A lot of the people from the top 16 were also there, which was really great. It was such a fun night."

But now that the celebrations have died down what's next? First there's The Voice tour and then there's an album to record. He plans on involving his coach Adam Levine in that process. "We talked a lot about getting in the studio and either him producing a track maybe or at least us getting in together to work on writing a song together. He had some ideas and he wanted to share them with me so I’m hoping that we get to do that really soon. He’s pretty busy with his upcoming touring schedule, so I want to try to get together in the next few weeks to try and work out something."

He added, "I love working with him. I love singing with him. Singing 'Man in the Mirror' with him was amazing. I thought our voices blended really well together and I’m looking forward to getting together with him on some more music in the future."

The Voice powers that be tell him the timeframe for the album is September and he says the style will be very varied. "I’m a singer-songwriter at heart. And it’s probably going to be more of a genre of pop I guess you could say, a singer-songwriter pop thing. It’s going to be kind of like a cross between you know, James Taylor meets Maxwell meets John Mayer thing if that’s possible."

Unlike the last time he made an album, he hopes to have more input into the end product. "My goal is to have as much creative control as possible. Whether that’s going to happen is going to be something that only time will tell, but I’m looking forward to working with the record company. And I do think that they have hopefully the same artistic vision that I have, much more so than in my previous situation."

"I’ve learned from my mistakes from the last time in allowing folks to steer me in the right direction instead of leading the way. And I’m going to make sure that I’m a bit more vocal about things if it’s not something that I agree with," He said. "But I’m really pleased with the folks that are at the label and how they have been so far. And I’m looking forward to working with them and I’m sure that things are going to be great."

As for the tour, the top eight are hitting the road on July 27. Javier, Beverly, Dia and Vicci will be joined by Frenchie, Xenia, Casey and Nakia. They will be making stops in Los Angeles, Las Vegas, Chicago, Boston, New York and Wallingford, Connecticut. Javier commented, "The tour is going to be awesome… There are going to be some duets that we’re going to get to do with each other. We’re going to sing some songs from the show as well as some songs that you have not heard us perform yet. We’re going to have a great time."

And though he's now a big star, don’t expect the family man to be getting starry eyed and moving to Tinsletown anytime soon. "My goal is to keep my family as close as I possibly can at all times, to be with them as much as I possibly can. Are we going to be moving from Connecticut permanently? Absolutely not. My home base is Connecticut. It’s my wife’s home base. She grew up in Massachusetts and our support system is there… I would never uproot my family from the support system… Moving is not something that we have in our plans."

But he did clarify, "If I’m working on a record in California or somewhere and I can bring the family with me for a few weeks to a month or something like that so that they can be close, that’s something that we would possibly consider. But nothing permanent for sure."

And it's this close family tie that has made the exeprience worthwhile for the singer. "It’s a new life. It means that I get to support my family doing something that I love. It means stability for my family. It means hopefully not having to not pay one bill one month so that I can pay another one that is more important or that is more overdue. It just means that I can take care of my wife and my babies and that means the world to me."

Not only will Javier be able to get the bills paid, he seems to headed to major success. He reflected on advice his coach Adam Levine gave him recently, "He told me hold on. He said hold on for the ride man because it’s going to be crazy. We were standing at one point on the red carpet over at the Warner Brothers lot and everybody was just snapping pictures and there were just flashes everywhere, every which way you could look. And he’s like get used to it man because this is now your life… He told me that some big things were coming and to brace myself and I’m doing my best to do just that."

To find out more about The Voice tour visit the shows website.