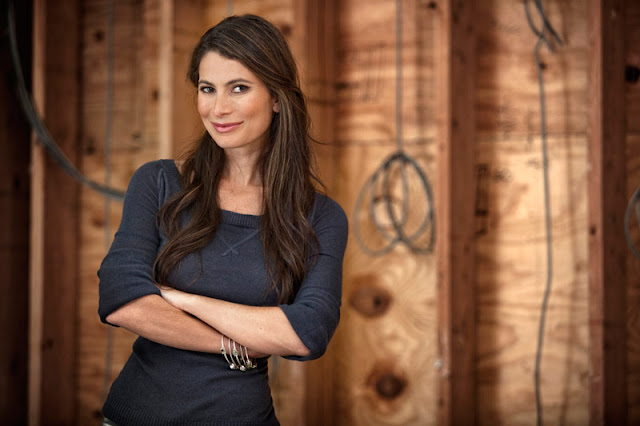 Hollywood Hi-Tech, DIY Network's newest show, premieres tonight and host Janna Robinson works with some of TV and movies biggest names to create home theaters, entertainment spaces and even in-house studios. In a recent exclusive interview we spoke with Janna about how she got involved with the business, how to do a technology make-over on a budget and how to keep it all from looking too manly.

Janna did not set out to become a technology expert. In fact she said, "I really fell into it. I have technology lineage and it's always been something that's been of interest to me. But I was working in the celebrity community as an assistant to a well-known film producer and I fell into it." She explained that when he went off to get his private pilot's license, she was left behind to oversee the building of his house exposing her to a world she had not considered before.

Then she revealed, "Once I delved into the space I realized that there was a void for a real definable female voice and presence. And I started doing all different types of platforms just because the celebrity space was something that was very tangible to me, and a lot of fun. I basically kind of created [the show]. I saw that brands really wanted to be in the celebrity space and obviously celebrities love technology and it just seemed like really great synergy."


She first began her journey online. "I started doing this with Internet webisodes… I did a program called Celebrity Tech-Over which served as the template for the television show." But it took quite a while for the series to get picked up, she remarked, "I spent many, many, many years trying to get this made for television. And I heard many, many, more no's than yes's. It became a question of humility after a while." Still DIY saw the potential in Janna and has shot seven episodes to date featuring actors Patrick Warburton and Kevin Connolly, Entertainment Tonight host Nancy O'Dell, comedian Adam Carolla and Oscar-winning director Oliver Stone.

Janna commented that every star is completely involved with the project from start to finish. "People are very intimated. And as excited as they are about it, and they may have ideas, they're not 100% sure of how to execute it, and what products are going to serve them best… All the celebrities had a hand in what it is that we ultimately did for them and with them, but they really looked to me for guidance as to what was going to serve their individual needs best."

Obviously your average Joe is not going to shell out the kind of money that these A-listers spent for top-of-the-line equipment, but Janna insisted everyone can get similar results. "The great thing about technology, and hopefully what people will take away from the show, because there's a ton of takeaway information, is that you can achieve what we've done on each episode, on so many different scales. So it really can be done at any budget. Obviously the equipment that's going into these celebrity homes tends to be a bit more expensive, but that being said the idea of the show is to convey to people how they can do this at home."

Janna also brings a feminine touch to the makeovers. She wanted to stress that technology doesn’t have to be manly. She admitted, "When you look at the actual boxes themselves they are pretty ugly, although I think a lot of companies are really trying to make them a lot sleeker, smaller, etc. But I think it's really more about your décor and the way technology is designed today, with especially with flat paneled TVs and in-wall speakers, it's really meant to disappear."

She continued, "Products aren’t supposed to be cumbersome. They’re not supposed to be the eye soar in your room. It’s supposed to blend in with your decor. The idea obviously at the end of the day is functionality… but especially with women, décor is important to us and we want it to disappear and not be the big giant elephant in the room."

For related stories check out:
Enter to Win Your Dream Kitchen
An Interview with Sweat Equity's Amy Matthews