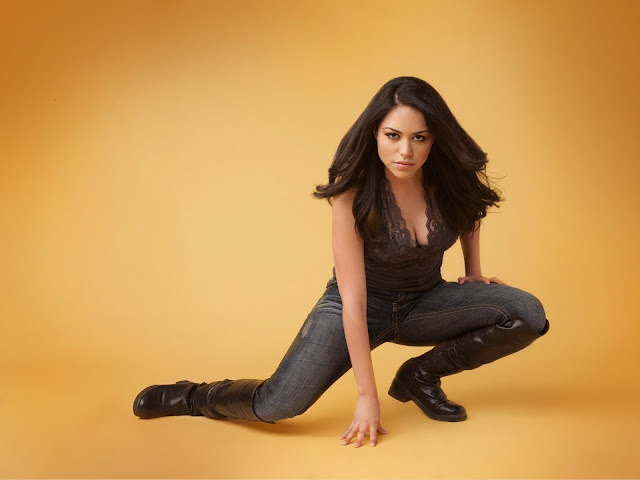 Alyssa Diaz is currently starring in The Nine Lives of Chloe King on ABC Family. She plays Jasmine, a catlike member of the ancient Mia race, who possess super powers like lightning speed, super hearing and over the top agility. Alyssa has been acting since the age of 16 including appearances on As the World Turns, CSI: Miami, Southland and Lie to Me. She recently completed filming on Shark Night 3D and Red Dawn. We spoke with Alyssa at a recent press event and found out ten things about the actress that you may not know.

1. She's Very Into Martial Arts
"I've been training in martial arts for almost a decade... so it's come in handy. A lot of projects that come my way involve some type of martial arts or action. So it's really a blessing to get this opportunity to play Jasmine and work in the show Nine Lives because I and get to utilize my other talents."

2. She Auditioned for Jasmine Over Amy
"I was in Shrevesport, Lousiana, filming a film called Shark Night 3D, which is coming out September 2, and I was reading the script and I was like. 'I have to play Jasmime.' They were like, 'Do yo want to go in for Amy or Jasmine?' [I said] 'Jasmine. Hands down I want to do this pilot, I want to play Jasmine. This is my character. This is my girl.'"

3. Her Favorite Quality About Jasmine Is She Balances Chloe
"I like the fact that Jasmine's really strong and loyal and has warmth. There's no jealousy between Chloe and Jasmine. It's like the yin and the yang. They balance each other. Chloe with growing up human and that type of lifestyle being a teenager and Jasmine growing up with this hard mother constantly training her, teaching her the way of the Mia. It's a beautiful balance between the two."

4. She Would Choose To Have Jasmine's Agility
"I think the agility aspect of it would be really neat to have. I'm not as graceful as Jasmine. I'm a bit of a klutz. So if I could be super cool with the movement that would be fun." She also added, "I'd like super speed. I could get a lot more things done."

5. She Hangs Out at Bookstores
"I am re-reading Letters to a Young Poet

by Rilke. One of my favorite books is The Alchemist

, that one I can read over and over again. I like books that have really great messages behind [them], spiritual messages."

6. Her First Part Ever Was Huck Finn
"I was in elementary school and I loved reading. And this teacher was like, 'Do you want to take a cooking class or the theater class.' And I'm like, 'Well what do you do in the theater class?' I was never exposed to it as a kid. And I see all these kids reading aloud from books and I was like 'I can do that. That's easy...' And it just started from there and I haven't stopped. I played Huckleberry Finn."

7. Her Most Embarrassing On-Set Moment Involved Torn Pants
"I was doing a scene and my pants ripped in the crotch and I was wearing hot pink underwear that day."

8. She Covets Her Chloe King Wardrobe
"I love the wardrobe. They've given Jasmine a lot more fashion as the episodes have gone on, which is fun. I get to wear a lot of leather jackets and J Brand jeans, which I love. If you're a curvy girl, which I am, they are the miracle jeans. Jasmine's very sleek, she wears a lot of... form fitting jeans and cool tee's and black leather jackets and cream leather jackets. It's a very sleek look that she has. It's a little rock and roll-ish too, which I like. Rock and roll glam-ish."

9. Bruce Lee Is Her Hero
"I love Bruce Lee. I'm a big martial arts fan of Bruce Lee and Tony Jaa who did Ong-Bak. And I love Angelina Jolie. There's just something about her that's so fantastic. Milla Jovovich is fantastic. Just somebody that carries that raw energy and brings it to the screen is fantastic. I'm always fascinated watching them."

10. She Has No BFF from the Chloe King Cast
"I love everybody. Our cast is awesome. There's no drama. There's no ego. We all love each other. It's all pretty equal. And we have such unique personalities, everyone is do different but at the same time so loving, that we all get along really well."

For related stories check out:
Skyler Samuels Gets Tough on The Nine Lives of Chloe King
Chloe King's Amy Pietz Plays Mom On- and Off-Screen