Margaret Cho Would Go Back to Her Five-Year-Old Body 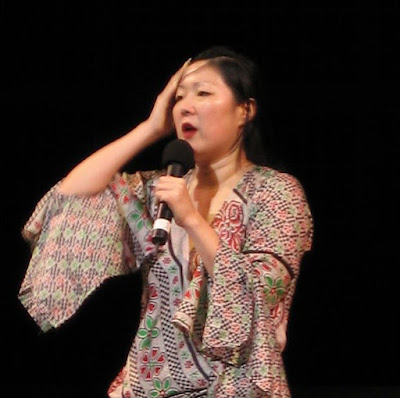 Margaret Cho has never been shy about talking about her personal issues with weight. So it wasn’t a total surprise when she ended up in the cast of Drop Dead Diva. The series tells the tale of Deb, an aspiring model that dies in a car accident and winds up in the body of a plus-sized lawyer named Jane Bingham. Cho plays the sassy secretary with a heart of gold.

In a recent conference call, we asked the comedian-turned-actress whose body she’d pick if she could be magically transported like her TV boss. The stand-up who famously battled network execs over her size during the run of her short-lived sitcom All-American Girl, answered, “I would like my body from when I was five. It was a really good… When I was five, that’s when I started dieting and wrecked it. I shouldn’t have started dieting so young. But my mother was always on diets and then she always wanted me to be as perfect as possible. Unfortunately that was the wrong answer.”

She took a moment to issue a short PSA on body image to anyone who’ll listen. “Please people with children do not make your kids go on a diet. It just makes them set up for failure in the future.”

She added, “I always look at pictures of myself when I was like five, six, seven and think, ‘Well, I was the perfect weight then.” I would like to go back to that. That’s really sick I know and is wrong, but I never really had a chance as a kid and I grew up to be a very overweight teenager. So it’s very difficult for me to find body satisfaction… Now I really focused on getting happiness with myself from within and… Drop Dead Diva really helps me do that.”

Cho also reflected on the ways that she differs from her Diva character. “I, in real life, never wear long pants and this is all Teri wears. So that’s probably the major difference between our characters. Also I’ve never really had a job like that. I’ve never worked in an office. I’ve never had a nine to five. So I guess Teri is me if I were forced to actually have a real job and have to sort of dress conservatively and have a boss. Although she doesn’t really consider Jane a boss. She considers Jane a friend. So we are similar and different. Also Margaret, myself, I have a lot tattoos; Teri Lee has none.”

Of course that could change. Cho admitted that she her character continues to evolve. “What’s great about it is that I’ve never actually played a character for this long. I’ve done films and I’ve done pilots and I’ve done series but never longer than a year. So to come back to the third year, to complete the third year of playing this character, I feel like I know a lot more about her and how to play her and it helps me a lot as an actor.”

She also credits her Diva co-stars for helping her develop in her part on the show and “working with the incredible Brooke Elliot, who is really one of the greatest actors on television out there today. I’ve learned so much from her. What’s great is to be around all these talented people and learning so much that’s what really informs me more than my own idea of what the character is. It’s interacting with these other great, fantastic performers that’s helped me grow.”

But at heart, Cho acknowledged that she’ll always be a comedian first and foremost. And she’ll always use her humor to do good around the world. She remarked, “Comedy is actually one of the most effective agents for social change. And you see in television. This is very true when you think about people like Jon Stewart or Stephen Colbert, but also in our show where we deal with a lot of social issues that are very important.”

She added, “Coming up is an episode about the gay prom, which was a real thing that happened really not far from where we shoot Drop Dead Diva in the South where these two young women wanted to go to the prom together. And the prom was canceled because the school didn’t want to support a same-sex couple going to prom. And this was such a heartbreaking story in the news, and so we did a show about it and it was really powerful.”

She noted that a very special guest lent her voice to the episode’s topic as well. “On that show Wanda Sykes, who was heavily involved in that case and publicizing it played a judge... And also one of the girls who was actually the girl just trying to go to the prom with her girlfriend, Constance, came and played a bailiff. So we had a lot of really great moments in that episode.”

A bi-sexual herself and gay rights activist in real life, the topic is very dear to Cho’s heart. “It was a really great show of support for gay pride, which is an issue that I am constantly, constantly, constantly promoting. And it just makes me feel good that we got to do that. And so I feel like television comedy, and comedy in general, is a really important avenue — a really important way, a venue, to change society and to grow and I’m so proud that we got to do that.”