Letters of Note from J.K. Rowling, Stanley Kubrick and More 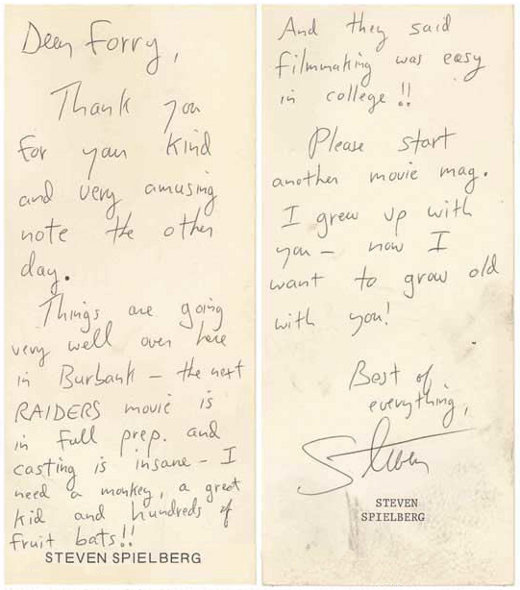 As we have done in the past, we present this post with a warning. The site we are about to discuss will definitely be a time suck beyond your wildest imagination. Letters of Note features reprints of correspondence from famous people on a seemingly infinite variety of subjects. The authors include a range of actors, directors, writers, singers, athletes, heads of state and more.

One note is from a pre-Born to Run Bruce Springsteen apologizing to his landlord for the late rent payment. There's a letter from Queen Victoria sending condolences to Mary Todd Lincoln after her husband's assassination. President Gerald Ford and his kids sent a loving note to Betty after her cancer diagnosis. A teenage Michael Jordan sheepishly wrote to his girlfriend for making her look "pretty rotten." And Beethoven penned a love letter to a mysterious woman.

Here are excerpts from some of our favorites.

J.K. Rowling
A young girl, who suffered the tragic loss of both her parents, contacted J.K. Rowling, the author of the Harry Potter

series, with a heartfelt note about her empathy for the boy who lived. Rowling wrote back, "Being a teenager can be completely horrible, and many of the most successful people I know felt the same way... It is an honour to me to know that somebody like you loves Harry as much as you do. Thank you very much for writing to me, I will treasure your letter (which entitles you to boast about this response as much as you like!)"

Steven Spielberg
While filming Indiana Jones and the Temple of Doom

, the director wrote a note to the editor of the magazine Famous Monsters of Filmland. "Things are going very well over here in Burbank — the next RAIDERS movie is in full prep and casting is insane — I need a monkey, a great kid and hundreds of fruit bats!! And they said filmmaking was easy in college!! Please start another movie mag. I grew up with you — now I want to grow old with you!"

Hunter S. Thompson
The angry Fear and Loathing in Las Vegas author wrote to William McKeen after he penned a biography on the Gonzo journalist, "I warned you not to write that vicious trash about me. Now you better get fitted for a black eyepatch in case one of yours gets gouged out by a bushy-haired stranger in a dimly-lit parking lot. How fast can you learn Braille?"

Stanley Kubrick
In 1960 a 31-year-old unknown director named Stanley Kubrick, wrote to his hero, Ingmar Bergman. "I should like to add my praise and gratitude as a fellow director for the unearthly and brilliant contribution you have made to the world by your films... Your vision of life has moved me deeply, much more deeply than I have ever been moved by any films. I believe you are the greatest film-maker at work today."

Sir Alec Guiness
Before the release of the film A Passage to India, Sir Alec Guiness wrote a letter of apology to the director David Lean for his performance in the movie. "I think the film is marvellously good and do congratulate you most heartily... Also I think it is beautifully acted — with one excruciating exception... For my own part I'm afraid I thought I was sickeningly awful. I thought it was poor at the time we were doing it but I hadn't realised how wide off the mark I was. I don't in the least blame you, as you were helpful, but I do wish — when I asked Richard, very calmly and unfunnily, in the first week, if you'd all like to get rid of me he had taken me up on it."

Set aside a few hours and dive in to Letters of Note. Happy reading.