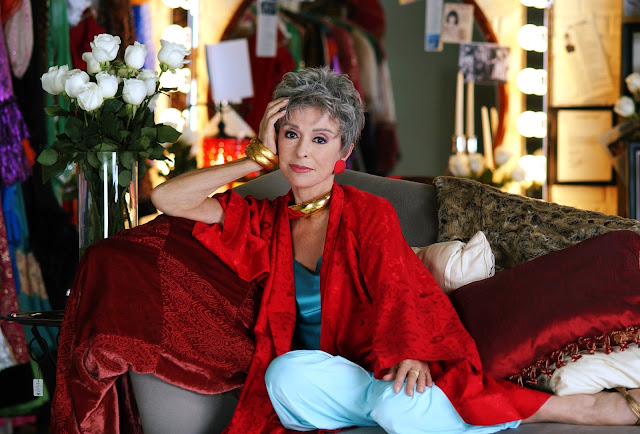 Hey you guys! Have we got a great interview for you today.

Let’s face it, there are very few stars in the same class as Rita Moreno. First of all she’s one of only ten people in history to EGOT, winning the Emmy (twice), Grammy, Oscar and Tony. Add to that the fact that she’s starred in shows ranging from children’s television to edgy, dark comedy. She does it all. And let’s not ever forget that she played Anita in West Side Story, hence the “O” in EGOT.

We were honored to get to speak to her exclusively about her role in the new Fran Drescher sitcom Happily Divorced and her upcoming one-woman show Rita Moreno: Life Without Makeup. At 79 the legendary actress is doing it all. No wonder she calls herself “this year’s Betty White — Latino style.”

It would be easy for a star of Ms. Moreno’s caliber to be jaded but it was refreshing to hear her take on her almost 70-year stint in show business. She confessed, “The breadth of my career is kind of stunning. Sometimes I get amazed. It is [overwhelming at times].”

But the multi-talented performer is very clear on how she defines herself. She revealed, “I think of myself as an actor who dances and does musical things, because even when I sing, I really sing as an actress. I view the song as a monologue set to music.”

So with all those skills, it’s no wonder that Ms. Moreno is on the EGOT short list. But there are two honors that stand out above and beyond all the others. She admitted, “It’s really the Oscar [for West Side Story] because it was the very first. It was quite a first. And right alongside that, not second but alongside it, is the medal of merit that I got from President Obama a couple of years ago. That’s pretty spectacular. It is a gorgeous, gorgeous medal.”

But beyond all the Hollywood glitz and AWARDS, there’s a real depth to Ms. Moreno’s story. That’s why she’s bringing her one-woman show, Rita Moreno: Life Without Makeup, to the Berkeley Repertory Theatre in Berkeley, California, this fall.

She described the upcoming production, “It’s the story of my life starting literally with the very beginning when I came to this country on a ship. In those days if you were a poor Puerto Rican, or a poor any kind of immigrant, you didn’t fly. Who could afford that? We came by ship, on a ship called the S.S. Carabobo, which to everyone’s astonishment translates to the S.S. Stupidface. Do you believe that? Carabobo. That’s what it was called. Carabobo.”

The startling revelation was one that Ms. Moreno had just recently. She added, “I didn’t know the name of it until we started doing research to do the show. And I was sent a picture of the ship. And sure enough it says, in Spanish, S.S. Stupidface. Not an auspicious way to start your life in a new country.”

But as the big Broadway hit goes, “It’s not where you start, it’s where you finish.” And although her beginnings may have been humble, the journey she would embark upon has been no less that extraordinary.

She explained, “It starts with a big picture of the ship and it really goes through my life in Puerto Rico and then into New York and then to Hollywood. And the first act ends with Marlon Brando… It’s the only way to end the act.”

The show doesn’t slow down after intermission. She continued, “In the second act we go full force into my career and my marriage and the birth of my beautiful daughter, Fernanda, and to date up to now.”

Now includes not only the autobiographical show but her new hit series “Happily Divorced.” The sitcom chronicles Fran Dresher’s real-life experience, when her husband of 18 years announced that he was gay. Ms. Moreno called the experience, “sheer happiness and laughter and fun.”

And that’s an emotion that seems to permeate the icon’s career. When asked to recall her favorite moment on the set of West Side Story she choose one that seemed filled with joy. “When we were filming ‘America.’ What George [Chakiris] and I didn’t realize at the time is that our costumes were going to make a very big difference in the very end when all the girls land on the boys’ shoulders. His costume was made of silk. It was silk mohair, that beautiful black suit that he wore. And my costume was made of silk. Four things that loused up that last thing — the costumes and then the fact that his shoulders sloped and my behind was wider than his shoulders. So every time we did a take and I had to land on his shoulder, I’d start to slip off. I mean I was just trying to hang on for dear life and I would start to ooohhhhhhh. God I think we did about 28 takes. I just could not get my behind… When we were rehearsing he was wearing a t-shirt, I was wearing either jeans or a cotton skirt. How did I know what was going to happen? It was hilarious really.”

That’s not to say it’s been a life without its ups and downs. As she noted, “There’s also an enormous amount of humor in failure and I had a lot of those.” And according to the actress, that will all come through in Life Without Makeup. As Ms. Moreno acknowledged, “It’s poignant, it’s very sad at times and it’s also extremely funny.”

She reflected on the first workshop that she did for a small group of donors. “There were about ten of them and… at the end of it people were in tears and laughing and applauding. And I said to [Berkeley Rep’s Artistic Director Tony Taconne], ‘You know, that’s quite a life.’ What a life I’ve lead. I’ve never thought of it as anything but a life. Everybody has a life and their story. But I didn’t realize, probably because of the way he has put it together, that it is a very interesting life. And if nothing else for the fact that I came here as an immigrant and had to fight the worst kind of discrimination in films and all that kind of stuff and somehow came through that. And here I am still. Like the song goes, ‘I’m still here’… and working — happily employed.”

Watch Happily Divorced on Wednesday nights at 10:30 p.m. EST/9:30 p.m. Central on TVLand. And see her one woman show, Rita Moreno: Life Without Makeup, this fall at the Berkeley Repertory Theatre.