An Interview with Matheus Fernandes from The Glee Project 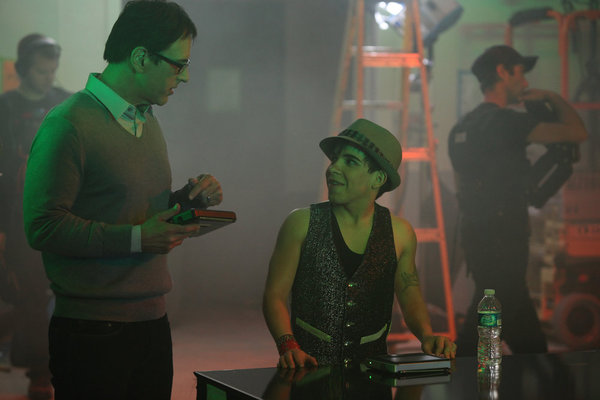 We thought Matheus was a shoe-in to take the whole thing the first night we watched The Glee Project. He could sing like nobody's business and he was a "type" that Glee had not seen before. Matheus and his family had moved to the States from Brazil to see if they could determine why he was not growing at a typical rate. It turned out there was no reason, he was "just short." The diminutive singer stands at just 4'9", making him perfect fodder for the mean kids at high school who tease anyone who's different.

It's this unique quality that helped Matheus understand the characters on Glee. "That’s one of the reasons why I related so much with Glee to begin with was because those kids, they used music as an outlet for them. And I’ve always been judged by many people in high school like, 'Oh look at that kid. He’s too weird. He’s different.' And whenever [I’d] say that I wanted to become an actor or a singer they wouldn’t really believe me. So just seeing Glee and seeing those kids live through the same stuff, that inspired me a lot. And that’s why I wanted to participate in this project."

And it took guts for Matheus to take the step at the Dallas auditions. He had no professional experience at all. He explained, "I used to perform in choir, like with a group. I used to also sing a lot of YouTube videos. And I built up a little fan base there, but nothing ever professional. I never went to do gigs like lots of the contenders have done or I wasn’t part of any bands or anything like that. [This] was completely brand-new to me."


And while The Glee Project on the surface is a supportive environment, it is still a competition and Matheus had his fair share of bullying on the show as well. Glee creator Ryan Murphy asked Matheus to act more sexy and confident, but his fellow competitors felt that translated into cockiness. In fact he got into it pretty intensely with fellow contestant Alex, who challenged him to see who could hit a higher note.

When he and his partner for the pairability challenge Damian wound up in the bottom three, the charming Irish kid came to his friend's defense saying the other contestants were cutting him down. Matheus told us how he felt about his partner's words, "Damian was like my little big brother. So defending me like that, I really appreciated it. I didn’t like being put on the spot but when Ryan asked, 'Which people have been doing whatever,' he’s the creator of Glee so he knows what goes on in the house. So I had to be fully honest with him."

And in the end the singer patched things up with Alex. "We definitely did make up. I love Alex. I love all of the contenders there. It was a time of pressure. It was really intense in the competition. And I guess sometimes that makes the worse things come out a little bit. But it was an intense week and I don’t think anything against him. And obviously, I’m not saying that I was right either but it was just an intense week. But last night after we just watched the episode, we texted each other, we talked about it and we’re fine and we’re cool now."

And still despite the confrontations and the fact that he was eliminated in week five, Matheus has no regrets. "I’m the type of person that believes that everything happens for a reason the way that it’s meant to. And I’m very faithful. I believe in God and he always has a path laid out in front of you. So if this was not my path that he wanted then I think that nothing should be changed. I think that it happened the way that it was probably supposed to happen."

And so now what's next for the singer? He replied, "I definitely want to keep going with music. I love music. I love performing. I just I want to be able to inspire people and touch other people and show to them that it doesn’t matter if you’re different or not. You can still follow your dreams. You can still keep going and you still pursue what you love despite other people trying to bring you down."

Tune in to The Glee Project on Sunday nights at 9 p.m. EST/8 p.m. Central on Oxygen.