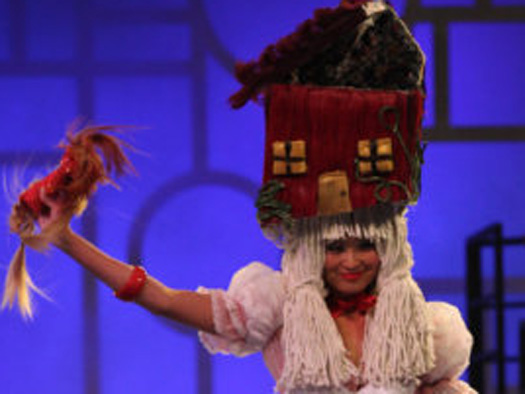 Season two of Hairbattle Spectacular starts on Monday, August 15 with a new host at the helm. Actress and model Eva Marcille will usher the contestants through eight weeks of grueling challenges in a fight to see who can present the most elaborate, outlandish, outrageous and fantastical hairstyles.

Eva is no stranger to reality TV. She won cycle three of America's Next Top Model. But she is not just a ditzy catwalker. Eva the Diva, as she has been knows since childhood, was actually on track to become a lawyer when the runway series cast her that fateful season. Since then she has strutted in fashion shows worldwide, appeared on numerous magazine covers and launched an acting career. She's been on TV shows like Tyler Perry’s House of Payne, Smallville and Everybody Hates Chris and movies like Crossover and I Think I Love My Wife. And she currently is a series regular on The Young & the Restless. In a recent conference call interview, the model turned actress talked about why she wanted to be on Hairbattle Spectacular, being a reality show contestant and the most outrageous hairstyle she ever has had to wear on a shoot.

On Why She Wanted to Be on Hairbattle Spectacular
"I have watched the show and the pop culture has definitely taken on fantasy hair as one of the leading things right now and if you look at like Lady Gaga who came to [an] award show in an egg with crazy hair and crazy fashion, that’s what we play off of. And we shed a light on what’s going on in our pop culture outside of what’s just simple and mainstream. And that was so intriguing to me because I see everything.  Being blessed to be in this business, you see it all. But fantasy hair is something you don’t see on an everyday basis, but it’s something that you want to know about. So that’s why I just kept tuning in. And then to be a part of the project was absolutely amazing, to work with experts such as Derek J and Taylor Jacobson who know everything fashion. To see all of these creative minds together making such an amazing project it was a joy for me everyday."


On Her Being Able To Relate to the Hairbattle Contestants
"Competition is hard. It’s not an easy thing. If you see a basketball player and he’s on the court and he’s shooting his free throws or his three-pointer, it’s easy by yourself. But it’s hard when you have people guarding you and everyone else on the court. So that’s the same thing for competition. There are amazing stylists, but when it comes to them having to compete and [the] amount of time allotted, giving an inspiration and you have ten other people that are equally as amazing, it just makes for a crazy, crazy situation. And I know what that situation is like having to live with 14 people and having to put my best face forward every morning in a strange environment. It can be crazy."

On the Most Outrageous Hairstyle She's Had to Pose In
"I did a shoot for Vibe magazine more recently where celebrity hairstylist makeup artist Terrell Mullin did my hair. It was a laced front ponytail – lace front wig –  and he made this huge ponytail and this fishtail braid that went all the way down to my knee. The hair had to weigh at least 15 pounds. And I had to wear this taped to my head and model, deliver the shots that they want. And that was definitely outrageous. It allowed me to have a lot more respect for hair models because that is not easy work."

On What's a Better Prize: Money or a Contract
"For America’s Next Top Model, the prize was $100,000 and a Cover Girl contract. This situation [is] different. I would say $100,000 would be an enormous prize because it gives you an opportunity to basically setup shop and start doing what you want to do. As a hairstylist, you’re basically freelance. You’re basically independently employed. And because of that, the money helps you to start your business. It helps you to start where you want to go because you are independent. And so being able to setup shop, be it building a shop or being able to partner up with someone else in creating, or traveling and being able to go into the hair shows because it’s not cheap to create this designs. It costs. You have to pay for all the different hairs and the things that you use for your techniques and your fillers and then the fashion. So it definitely helps give you a leg up in the business as having like a little starting fee."

On Her Memorable Moment on Hairbattle Specatuclar
"One of my most memorable moment from the show has to be the episode where we had drag queens. And what was so amazing is that every week we used female models to display the hair designs as well as the makeup and the outfits. But for this particular week was the one week where we were allowed to use gentlemen. So for me to have men on set was amazing, but they put on high heels. So it was an absolute riot the entire day and it was just amazing to shoot."

Watch Hairbattle Spectacular when it premieres on Monday, August 15 at 10 p.m. EST/9 P.m. Central on Oxygen.