SallyAnn Salsano Is a Big Wig on the Jersey Shore 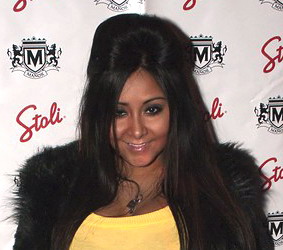 People who love reality TV should be as familiar with SallyAnn Salsano as Mark Burnett. First of all she’s produced big name shows like The Bachelorette, Dance Your Ass Off and A Shot at Love. But her real claim to fame is bringing the kids from the Jersey Shore into your living room. In a recent exclusive interview she talked about creating the controversial series and the other shows on her production company’s slate.


SallyAnn talked about a career-changing call that she got from a cable network executive, “There was a woman at VH1 named Shelley Tatro that called me and goes, ‘You’re the biggest Guido I know. We need to do a show on the Guido.’” And with that Jersey Shore was born.


An exhaustive casting process for the ideal cast of characters to share a Shore house began. Having lived the lifestyle herself in her younger days, SallyAnn found her dream team. And when she hears the often-harsh criticism of her cast, she’s quick to come to their defense. “At the end of the day if you picked any one of us at that age, these kids are actually inviting us into their lives. This show to me is like a real life John Hughes movie. I grew up watching Breakfast Club, Sixteen Candles and watching people grow up, make mistakes, fall in love and lose their virginity all on film. And in this case these are real kids who are not trained, that are not reading a script and not doing anything. And they’re just following their hearts and doing what they think is best. And I think there’s a certain amount of credit that needs to go out for that.”


In addition to the hit MTV series, SallyAnn’s company 495 Productions has a wide variety of shows on the air. She talked a bit about each of the series.


First she discussed Repo Games, a show she produces for Spike TV in which contestants are given a chance to win back their repossessed vehicles — all they have to do is answer five trivia questions. Sally Ann described the series, saying, “It’s like a game show on crack.” It’s also quite relevant. She remarked, “Repo Games is a show that’s a sign of the times. This is what’s happening right now. People are in financial hardship and… life is sometimes a game of luck.”


She feels good about giving the not so fortunate a chance to test their fate. “And in a really cheesy way, you’re really helping people. Anyone could be excited about winning a new car, sure, f*$k, if I won a new car I’d be excited. But if my old car is about to be taken away and it’s my only means of transportation, it’s not so much like, ‘Oh, it would be nice to have a new car.’ It’s more like, ‘I need that damn car.’”


And as far as she’s concerned, what do the contestants have to lose? “If you wind up on [Repo Games], you might as well play. It’s the only game show where you’ve already lost before I show up. If I show up then you’re loser — you’ve lost your car. I’m giving you the opportunity to win it back. And my whole thing is, if you can’t pay, you might as well play. You have nothing to lose. You can only win.”


SallyAnn also produces the salon show Nail Files for TV Guide Network, which follows small business owner Katie Cazorla as she balances a career and personal life. Solano compared the show’s star to the cast of her most famous series. “Like the kids from ‘Jersey Shore,’ she does not apologize for her actions. She says whatever is on her mind — right, wrong or indifferent. And she will make that business work by hook, by crook, it doesn’t matter. She’ll leave carnage in back of her just to make sure that her vision comes to life.”


Finally, SallyAnn and her team are behind the more humorous series Disaster Date, which is also on MTV. She described the series, as “a hidden camera dating show where you basically set up your best friend on a prank. So basically I would set up my best friend on a blind date, but I would be sitting behind the scenes telling an actor what to do to make my friend crazy. And the goal is make your friend run out of the date and be so freaked out — fun in a light-hearted way.”


Watch as the Jersey Shore takes their show to Italy on Thursdays at 10 p.m. EST/9 p.m. Central on MTV. Catch Repo Games on Tuesdays at 11 p.m. EST/10 p.m. Central on Spike TV. And check local listings for airtimes for Nail Files on TV Guide Network, Love Handles on Lifetime and Disaster Date on MTV.
Posted by Pop Culture Passionistas at 2:00 AM