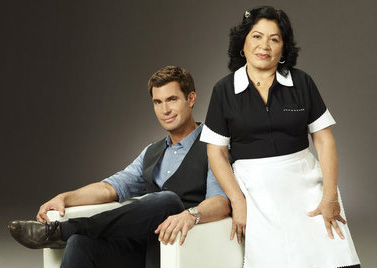 In honor of The Help, which comes out this week, we wanted to revisit our favorite maids in pop culture. We're sure we left out some good ones. Who do you think is missing from the list?

Perhaps one of Robin Williams' best parts — the dad who will do anything to be close to kids, including dressing in drag and become his ex-wife's housekeeper.

Hazel is the godmother of all TV-maids, paving the way for every sage, take-charge housekeeper to follow in her sitcom footsteps.

8. Rosario
The Members-Only-wearing, Subway-sandwich-eating maid to Karen Walker on Will & Grace was one of our favorite characters on the show. The feisty housekeeper took no grief from her boss, perhaps because back in El Salvador she was three credits shy of a Master's Degree in clinical psychology.


7. Daphne Moon
We related much more to the down to earth Daphne Moon than we did to the high-falutin' Crane brothers on Frasier

. Though we always wondered why the supposed psychic housekeeper took seven seasons to figure out Niles had a crush on her.

Any version of Cinderella, the young girl who was forced to keep house for her evil stepmothers and ugly stepsisters, is okay in our book. But the Lesley Ann Warren made-for-TV movie holds a special place in out hearts. There was something about "In My Own Little Corner" that spoke to us. And we'll take "Why Would a Fellow Want a Girl Like Her" and "Impossible" over "Bibbidi-Bobbidi-Boo" any day of the week.

5. Mrs. Garrett
Edna Ann Garrett was such a good maid, she had two shows. First she was the housekeeper for The Drummond family on Diff'rent Strokes

. And then when she got tired of hearing what Willis was talking 'bout, she moved to a new series, The Facts of Life

. There she became the housemother at the all girls Eastland School.

4. Rosie the Robot
What better maid than a robot, really? Isn't it what we all dream about? And her job on The Jetsons

was pretty easy, press a button and, voila, you have dinner. But Rosie was more than just outdated nuts and bolts, she was always ready with a stern hand or some kindly words of wisdom.

3. Zoila
You don't see too many maids on TV these days, but leave it too Jeff Lewis from Flipping Out to keep up the fine tradition of domestic help. And though he treats all his employees with an iron fist, Mr. Jeffrey Lewis, as Zoila lovingly refers to her boss, has a soft spot for his faithful housekeeper.

2. Florence Johnston
Florence was George and Louise Jefferson's housekeeper, who never seemed to do much cleaning and, according to George, was a terrible cook. But Weezie wouldn't let her husband fire the maid who had become part of the family at The Jeffersons

deluxe apartment in the sky.

1. Alice Nelson
Ask anyone and we're pretty sure most will say that the quintessential TV maid is Alice from The Brady Bunch

. The center square of the famous opening titles was loyal and loving. And she was always waiting around the corner in that ’70s burnt-orange kitchen with wise insight or a joke to break all that dramatic tension.