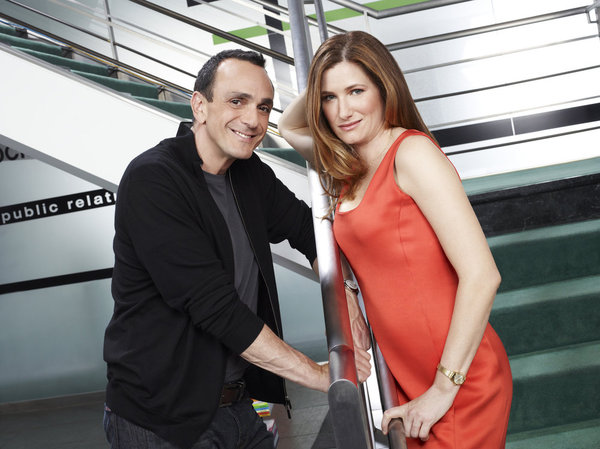 Former-Huff star Hank Azaria has returned to television in the new workplace, romantic comedy Free Agents. In a recent conference call interview, Hank and his co-star Kathryn Hahn talked about what sets the series apart from the rest of the pack.

Hank noted, “Alex, his greatest strength is also his biggest problem. He's very in touch with his emotions and honest about how he feels which is good and healthy. However it can slip very easily into whiny annoying. There’s a fine line between healthy expression of emotion and wallowing which he hasn’t quite figured out yet.”

As for her character, Kathyrn remarked, “There’s something to me that is appealing about how she’s neurotic. Her shell is so well-defined. She's just polished. I like her little micro chord shift and her shoes and her hair is fantastic. And I love how much energy she spends on the outside, where her inside is just like a total disaster. She's actually really paranoid, very concerned with how people see her, which it just doesn't sound really appealing.”

Kathryn realized that this is a challenging character to make likeable. She added, “It really doesn't sound that cute. I could say, ‘Oh she's a lush. Like she loves her liquor.’ But then suddenly underneath it there's a women that keeps her pictures of her dead fiancé on her walls. There’s something about her that's just really sentimental and an old-fashioned romantic in there, and that has had her heart just trampled on. So in their she's a little softy.”

Hank admitted that they’re adjusting to their new roles, “We’re still all learning each other. It's almost like I to use a sports analogy. It’s like a team trying to find their chemistry with each other. It takes a little while to gel. It didn't happen overnight in Miami for LeBron and Wade and Chris Bosh.”

But Hank is enjoying the chance to get in sync with his fellow castmates, “It's really fun to do. They’re all really wonderful and we’re really lucky on this one. Everybody is genuinely a good person, fun to work with, tries really hard, is very generous. So we’re all having a good time.”

If you ask the stars Free Agents isn’t just like every workplace show on television and has even evolved in its own right over the course of the first couple of episodes. Kathryn commented, “It's a different kind of comedy… It’s so interesting. The pilot sets this very grounded foundation that is now going to enable us to go off into a surprising comedy, just comedy I think moments and scenarios. You needed to ground these people first before they can do what we know we can do and like our wheelhouse comedy-wise because the cast is so genius.”

She praised the series creator for bringing his unique talent to the show. “John Enbom is such an unbelievably funny writer and true writer. Yet we’re able to do these very surprising and hilarious things. So it's extraordinarily funny. It's just the right amount of lowbrow and highbrow that just hits me right in the funny bone.”

Hank agreed, adding, “It's definitely starting with reality. And the emotional and the logistical reality of these people's lives, especially Alex and Helen’s, and the reality of where they are emotionally.”

He likened the series to another hit sitcom recalling, “Phil Rosenthal is a good friend of mine who ran Everybody Loves Raymond for years. And the way he used to describe it was the big rule is you just can't take the train to crazy town is the way he described it. You can't be funny for funny’s sake. You try to get as fascicle and outrageous situation as you can. But it always has to be believable and based in real character motivations and what people would really do. So it's hard. It's hard to write. It’s hard to execute. And it's hard to get the right tone. But it's a worthy effort.”