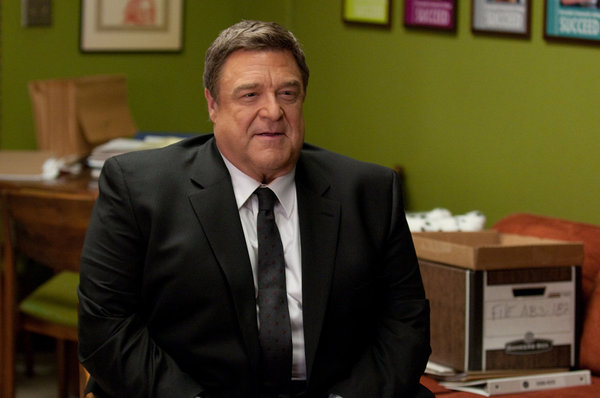 Season 3 of Community kicked off last week and John Goodman made a fine addition to the cast playing Dean Pelton's archrival and Air Conditioner School Vice Dean Robert Laybourne. After several seasons of drama on Damages and Treme, Goodman is dusting off his Roseanne comedy chops for another turn at funny business. In a recent conference call interview John Goodman told us seven things we thought you’d find interesting.

1. On Why He Wanted To Be on Community
"It’s the cast. I think they’re a wonderful ensemble. The writing is out there. It’s not a typical situation comedy sitcom. It’s risky and it’s a combination of great things and I’m just dying to get back into comedy again. That’s what I like to do. I enjoy it. And I’ve been doing pretty heavy guys lately, so it’s nice to lighten up. Not that that’s any easier, I had pages of dialogue yesterday that was really precise but it’s good to stretch like that."

2. On Why He Wanted to Come Back to Comedy
"I haven’t done comedy in a long time, intentional comedy. There’s a great sense of achievement because it’s so damn hard. There’s a lot of ingredients to doing it and it keeps your skills going. You have to learn how to juggle again and it’s just a great thing. Plus there’s a great payoff when it works. And I like to laugh almost more than anything in the world and if you can make somebody else laugh that’s a great thing."

3. On the Current TV Landscape
"It reminds me of the early days of television when they’d throw anything up against a wall to see if it would stick. With all the hour shows going to cable now, you’d think there would be more comedies out there. There are a few, but I thought there would be more, but it doesn’t seem to be going that way. I don’t know why, maybe there’s a smaller concentration of comedy writers than there are real people out there. I’m just an old crabby bastard. I’m not a big fan of reality television. There’s some stuff I like. There’s a lot of stuff that I don’t, but that’s just popular culture in general. I’m just an old crab."


4. On His Favorite Comedy Shows
"I like the whole thing that Ricky Gervais kicked off with — it was not a bogus documentary that’s done necessarily, but no audience. I like the way that goes around — The Office, Parks and Recreation, the whole NBC lineup."

5. On His Advice to Actors
"Be prepared."

6. On His Comedic Influences
"W.C. Fields… later on just everything was National Lampoon and Saturday Night Live for me and Firesign Theater."

7. On Going Back on Saturday Night Live
"I think I’m a little long in the tooth for that now. It’s just something that I haven’t thought about for a while, but boy they’re really good now and it’s wonderful to see. I’m down for that any time."

For related stories check out:
The Community Cast Doesn't Always Get the Jokes
An Interview with Jim Rash from Community