Kelly Monaco and Steve Burton on Their General Hospital Wedding 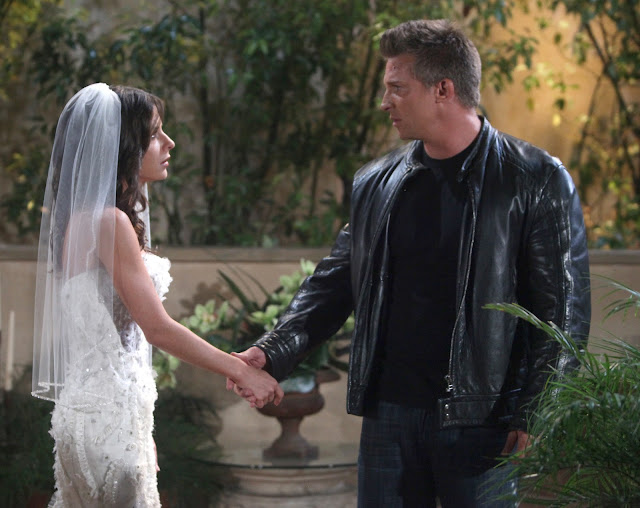 This week General Hospital is celebrating a big wedding. Beloved characters Jason Morgan (Steve Burton) and Samantha McCall (Kelly Monaco) are finally tying the knot. The magnitude of the nuptials is somewhat reminiscent of GH's iconic '80s wedding of Luke and Laura. And even though given the current state of the soap world, Jason and Sam's wedding may not become as big of a pop culture event as the preceding affair, it's still a party worth checking out.

We spoke with Steve and Kelly about the wedding and the future of soaps in a recent exclusive interview. The actors described the big day and revealed that they made preparations for a typical celebration. Steve said that once Jason proposed and realized Sam wasn't going to runaway, "We start planning a pretty traditional wedding, every woman's dream wedding — family, dress, church, the whole nine yards."

But the unconventional couple could not go through with the traditional pomp and circumstance and ended up tying the knot in a Chinese restaurant. Kelly remarked, "Little did we know there was a minister there that owned the restaurant."


Watch the clip below to hear the details.


And even though people are comparing Sam and Jason's wedding to that of Luke and Laura, the actors are humbled by the association. Steve responded, "Luke and Laura — they’re idols. They’re legends. I'm not even going to put myself in that category." And Kelly added, "It's like 'Here's the new Elvis.' There's only one Elvis.


Watch the clip of the couple discussing the iconic wedding.

Kelly and Steve also gave props to Luke and Laura for making GH what it is today and for perhaps giving it the longevity it has. In fact when All My Children goes off the air this fall and One Life to Live ends in January, General Hospital will be the last soap standing on ABC. Steve noted, "Luke and Laura pretty much set the pace for the show… to have that notoriety back in the '80s and to have generations of families and fans continue to watch the show, I think that's given us a leg up… All the actors are having a good time on the show and hopefully that translates to the TV and we stay on another 50 years."


Watch the clip of the couple discussing the state of soap operas.

Tune in to Sam and Jason wedding all this week on General Hospital through Friday, September 23, at 3 p.m. EST and 2 p.m. PT on ABC.

For related stories check out:
Days of Our Lives Turns 45
From Soap Stars to Superstars