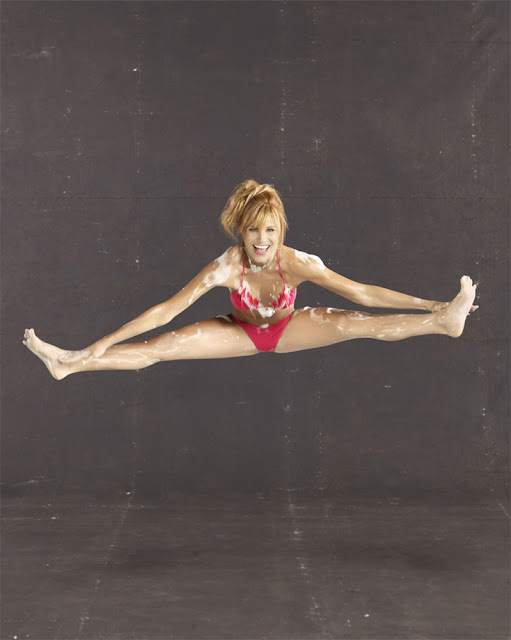 Tyra Banks has assembled an all star cast for this season of America’s Next Top Model. She’s chosen fan favorites from past cycles to compete for an even bigger prize than usual including a spread in Italian Vogue and a $100,000 contract with Cover Girl. Among the hopefuls is cycle five’s Lisa D’Amato. In a recent conference call she talked about doing ANTM — then and now.

“Ultimately, I went back on the show for a few reasons. One is definitely for the fan base and to really let them see something that they didn’t see the first time around on season five… I basically have been the person who can do all of it. I’m an all around, I’m talented in all types of areas.”

She explained that the all star version of ANTM has afforded her the opportunity to show her various skills since it’s about more than just walking the catwalk and posing for photos. “I’ve always been a seamstress. I have been acting since I was really young. I’ve been doing gymnastics. I can dance. I can sing. I can rap. I can do all of those things. And I was able to do all of those things as well as modeling from a very early age. And on season five, you only got to see me do modeling so it was a really great way to basically show all my talents as I should have been able to show them on season five.”

She acknowledged that that the chance to reveal her many talents is what lured her back to ANTM. “Personally, the reason I went on the show was, one, it’s not a modeling competition anymore. It’s really finding that star and having that star quality. And I think that I definitely have that, not to mention it’s all star so there’s people from every single cycle.”

Since she’s no longer an aspiring model, Lisa had loftier ambitions this time around. She admitted, “I’m not there to be a model and try to break into the industry… I’m going on America’s Next Top Model All-Stars to basically change history. I want to make history. You’re only as old as you look and I think that I look great, I look better than I ever have before in my whole life.”

She continued, “In terms of my career, I’ve been pounding the pavement in Hollywood since I was 11,12 years old. And I think that being that I am 30, if you look at me as being 30 in the modeling world, that looks probably old. But all the celebrities that everyone is obsessed with nowadays like Kim Kardashian and Paris Hilton they’re older than me. But I think it’s a double standard and I’m ready to change that.”

She’s also most likely trying to shine a spotlight on her singing career. D’Amato has two albums under her belt — 2009’s "La Puchinetta" and “"Flippin' The Bird" in 2011. But she insists that her return to reality TV is all about the fashion industry. She remarked, “Even though I have been performing music the last three, four years consistently I have still also been doing modeling with Harlow Magazine also with Swindle Magazine. When you’ve been in the industry that long, photographers, makeup artist or job stylist they all come to you because they still want to work with you. And at the end of the day people could call me crazy, they can call me this, they can call me that, but I am a 100 percent professional and I will be there ten minutes early to a set and I will rock everyone socks off, period, point, blank.”

Lisa’s also famous for her stint on Celebrity Rehab with Dr. Drew. She addressed that experience, saying, “To be perfectly honest going on Celebrity Rehab was something that I never wanted to do, absolutely not. From the season five of Top Model and being in the entertainment industry and my heart being a driving force since I was a little girl, I really couldn’t shake the image… a bit of being the party girl, wild child, the one who drinks and it was really hindering my career.”

She added, “I did it to basically show the world that if I do have an addiction or could get an addiction I’m going to do it in front of everyone like I’m not scared.” And she wanted to open peoples eyes about a very important topic. “I definitely want to pave a road of understanding with the public in terms of childhood trauma.”

She divulged, “Ultimately I want to be the best, I want to be the healthiest I can be and that’s what I’ve learned there. I got therapy for childhood trauma, I learned about drugs and alcohol, through brain scans and watching people detox. I personally didn’t detox or do any of those things but I did learn more than I could have ever have been blessed to learn about drugs and alcohol and building beautiful relationship within Celebrity Rehab and doctor Drew [Pinksy].”

She summed up that adventure by concluding, “It was a life changing experience and I feel blessed to have had that. But in terms of an addiction… if I could have gotten one that’s something that [people] will never be able to see because luckily I got help before anything went any further.”

Looking to the future, Lisa described the reason she thinks fans should tune in to America’s Next Top Model All Stars. “One thing’s for sure, everyone should definitely watch this season… I’m usually really, really confident in the competition regardless of who’s in there, but after meeting all these girls it’s a very tough competition because these girls have a lot to offer.”

Watch Lisa go head-to-head with her competitors when America’s Next Top Model All Stars airs on Wednesday nights at 9 p.m. EST/8 p.m. Central on the CW.
Posted by Pop Culture Passionistas at 2:00 AM