Anna Kournikova and Dolvett Quince on The Biggest Loser 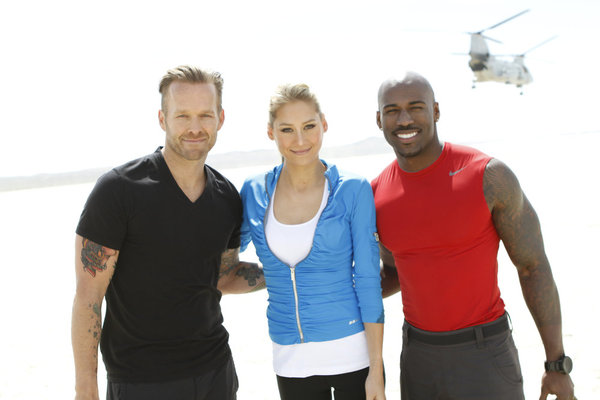 Season 12 of The Biggest Loser premieres on Tuesday, September 20. And this time around they are shaking things up a bit. Of course, as we all know by now, Jillian Michaels has moved on. So Bob Harper will be joined by tennis champ Anna Kournikova and personal trainer Dolvett Quince. The three coaches will each be given a team of five contestants who will be split up youngest to oldest in the "Battle of the Ages." In a recent conference call interview, we spoke with Anna and Dolvett, along with series executive producer Todd Lubin, about the theme for this season's show.

At first glance the division of teams may seem unfair. After all isn’t it harder to lose weight as you age? Well, that may be, but historically, older competitors have done very well on the ranch. Todd explained, "We've had a winner who's a 48-year-old. Helen was a winner. Last season alone our at-home winner, Denny, was in her 50's…59. And then we had an at-home winner who was 63. And so we've always felt like age was a number. And what a great catchy thing to say that it's never too late in your life to try to make a difference. It's never too late to grab your life by the horns."

Anna disagreed somewhat with her fellow trainer saying there are many differences working with people of varying ages. "All age groups have their pluses and minuses. The young kids are obviously more energetic but they're probably not as educated and smart in ways. They don't know how to manipulate and use their energy yet well enough. Now the middle age group is already where they have wisdom but they still have enough energy."


She continued, "The older group is the most difficult for me personally because they have less energy. They're much more set in their own way so it’s a lot more difficult to change someone's mentality who's in their 50's or 60's… especially when they’re dealing with younger people or younger trainers. It's a lot harder to convince them of your authority and your knowledge. And it's just harder when you're older... But all three groups definitely have its advantages and disadvantages. And it's really figuring out at the end of the day it’s still more than age. It’s very individual."

Todd revealed that when casting for this season, they were taking age into consideration because of the theme, but they were still looking for the personalities that would grab an audience. "Not only did we cast all different ages, but the older folks were not the healthiest we've ever had. So it was definitely a double hit for those folks because it just was how it turned out. We obviously cast for personalities and people that we love and we think America will love, so the fact that they were really physically incapacitated in some ways did not help. But all interesting stuff, all interesting life stories, all interesting relatable things that you can look at these people and really be inspired that they're going for it and they’re not giving up."

The contestants on the show this season also inspired Anna, who remarked, "It's really incredible to see these people's journeys. Remember, guys, they’re sequestered. They are on a ranch. They form and develop relationships. That's why it makes [an] amazing show. These people who are strangers just a couple of days before they got on their own, they formed and developed relationships. Now add in the mix that they're physically exhausted from working out six to eight hours a day and being on a restricted calorie, a healthy restricted calorie budget and there's some very interesting stuff going on… It really is an incredible genius setting."

As in season's past, the show does focus a bit on the relationships between the players. And Todd even had a few hints of things to come. "So what are we doing new this season? [We] added two total superstars and then went after an incredibly charismatic contestants including former professional athletes themselves. And then adding to a mix of people in their 60's and of course young ones. And there’s even a romance. I hope I didn't give too much away. There's even a romance that buds on the show. So the show is just awesome. We actually are really, really, really proud of this next season and it's truly a breakout season."

Tune in to see Anna and Dolvett on The Biggest Loser when it premieres on Tuesday, September 20, at 8 p.m. EST/7 p.m. Central on NBC.