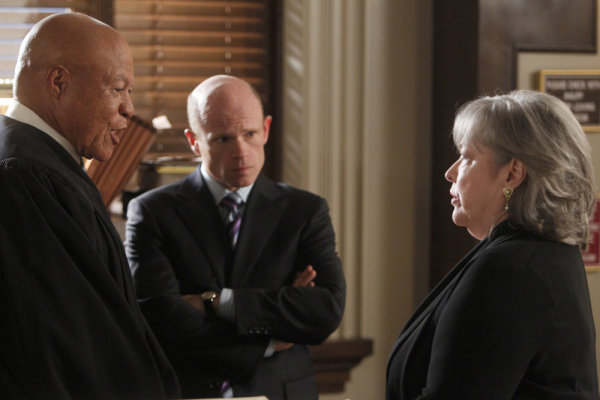 
Emmy-nominated actress Kathy Bates doesn’t always go after the touchy-feely part. Let’s remember she took home the Oscar paying the ankle-crushing stalker Annie Wilkes in Misery. But as the title character on the legal drama Harry’s Law, Bates must walk a fine line between likability and abrasiveness as the oh-so-blunt attorney. In a recent conference call interview, Kathy talked about her complex character.

Kathy revealed her favorite part of portraying Harry. “All of us have been in situations where we’ve maybe had a confrontation with someone and we walk away from it and then maybe a few minutes later or even a day later we think, ‘Oh, I wish I had said that. I wish I had been clever enough to say exactly this to that person.’ And I think that’s one of the things that Harry has is that ability that we all wish we had to say in the moment eloquently and forcefully exactly what’s on our mind and what even makes the best argument at a given moment. And it’s fun to be able to to play someone that has that almost superhuman ability to express themselves in that way.”

She continued, “I love playing a character who’s blunt, who’s irritable, who doesn’t get along with everybody, who doesn’t make any secret of her feelings. And yet, at the same time, she’s complex and we don’t really understand everything that’s going on with Harry at the moment and things are revealed in time. And I enjoy playing that complex character.”

But straddling the line between cantankerous and genial isn’t a conscious effort that Bates and the show’s Executive Producer David E. Kelley make. Kathy remarked, “I’ve never really talked about it with David. It’s just been something that I guess I’ve naturally been able to do. They’ve never had to say ‘dial it back’ in terms of the bluntness or anything. I guess there’s a likability there that I have and [I’m] lucky to have it. And that I don’t have to worry so much about that balance.”

She added, “There are opportunities that David has written in some of the scripts for Harry to bare her heart to different people in the cast. So that also helps strike a balance.”

But if Bates ever feels that Harry is crossing over into off-putting territory, she has an open door to Kelley. She acknowledged, “There are times when I think maybe she wouldn’t be quite as lovable. And if I have problems like that I usually go to David and talk to him about it and see if we can make some kind of an adjustment or vice versa. But I try to respect his wishes as the writer and the creator of the show and sometimes there are directions that he is going in that I don’t particularly know yet why we’re going that direction until it’s been written about in the next episode.”

As for whether or not Harry is an exemplary woman, Bates seemed to be of two minds. She conceded, “She’s a woman who’s probably given a lot for her profession and I’m very curious about Harry’s background. I know she’s been married a couple of times. And you never know with David whether a prodigal child will show up at some point or not. And so I don’t know that she’s necessarily a role model for women.”

But she admitted that Harry does have some admirable qualities. “She is certainly a woman who speaks her mind and tries to stand up for those causes that she believes are right. And she certainly speaks eloquently in the courtroom and she’s a smart woman. She’s not particularly affectionate, I don’t think. She’s got a heart of gold underneath all of that but she’s pretty blunt and pretty straightforward. I guess I don’t know that I think of her as a role model for women except for the fact that she is a strong woman and that she has made her way certainly in a world that is very difficult for women which is the law.”

In fact that’s one of the reasons that Bates was drawn to the role. She recalled, “My mother, God rest her, born in 1907, wanted to be a lawyer and there were so very few choices available to her when she was coming along. And when I got the script for Harry’s Law I thought about my mother and I thought, ‘Well this is as close as she’ll get.’ And it’s a bit of a nostalgic trip for me at times imagining what kind of lawyer she would’ve been because she was awfully smart and blunt herself. And so I kind of feel like she’s the Harry Korn in my life.”