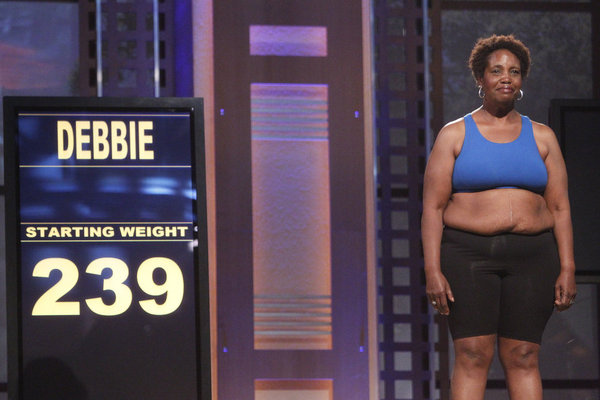 The Biggest Loser season 12 kicked off this week with new trainers Anna Kournikova and Dovlett Quince joining 11-year vet Bob Harper. Each coach was assigned a team of that was five split up by age. After a race through the dessert to choose trainers, Anna ended up with the "old" team — made up of players ages 50-65. But it seemed her soft-spoken, nice girl approach to training did not have the same affect as Bob and Quince's tough guy styles, and Anna's team ended up at the bottom during the weigh-in. When the five older players sat down to deliberate, 60-year-old Debbie Lounds assured her team she had a support system at home and she was voted off. In a recent conference call interview, Debbie shared ten thoughts about The Biggest Loser.

On Anna as a Trainer
"She looks so sweet doesn’t she? She does. And she’s a very pretty girl but she’s a real taskmaster. She works you hard and she doesn’t let up and I thought she was really good. I think that she cares a lot about us and emotionally involved and also wanting to see us succeed. I thought she was a great trainer. She gave us some difficult tasks to do, where our workouts were strenuous and because we’d never really exercised before. I thought she was good. I thought she was very good."

On Her Reaction to Seeing Anna
"I was excited to be in the desert seeing Bob, Dolvett and Anna, seeing all three of them. I had and have complete faith in the producers of the show… I have faith in what they were doing in their selection of trainers. I knew that they weren’t going to select anybody who they thought would not be able to help us."

On Having a Disadvantage Game-Wise with a New Trainer
"I don’t think it was a disadvantage. We weren’t there to play games. That wasn’t our goal. Anna pushed us. And most of us having never had a trainer before, we were doing what she was telling us. And all we know was that. All I know is that I was sweating. I was working out hard and as far as I was concerned she was doing a great job… On a certain level it wasn’t even about the money. What it was about was getting healthy. Although if we won the money that would be the icing on the cake, but that wasn’t the main goal."


On Her Reaction to Learning That All Competitors Would Run a Marathon This Season
"During the interview process when they’re asking you questions, a couple of times, they would ask a question, 'What do you think about a marathon, running a marathon?' And I would tell them, 'I never really thought about doing anything like that. But I’m not opposed to it.' And then they’d ask me it again in another way. And so then my antenna went up… There’s a reason why they’re asking me these questions... And then when we found out that we were going to be running a marathon I thought, 'How am I going to be able to do this?'"

On Her Thoughts on the Battle of Ages Theme
"When they told us how we were going to be separated in the desert and they had us divide according to our age I thought that it was a new twist that I had never seen… But I had faith in the people who were on my team. And I knew that even though we were older we were wise, we had wisdom and we had perseverance. And that whatever task we were given we would see it through... And so it didn’t really affect me because I figured however it turned out we were all going to be winners. We were all going to be losers, one way or the other."

On How The Biggest Loser Has Affected Her Family's Health
"Last weekend, preparing for the marathon, I had to work out for four hours. That’s the assignment I was given by my trainer. So [my daughter] and I jogged and walked and she went with me to support me. And she’s been watching her food intake. And my sister who lives in Chula Vista in California, she’s been trying to get on the same quest, path that I’m on. And it’s not just my family that has been impacted. At the job that I work at — I work at the University of Michigan Hospital — people here see me lose weight [and] are becoming more active in wanting to be healthier… Quite a few of my co-workers are working out more. And we’re working out together and we’re taking the stairs more and we’re going outside for walks more. So it’s not impacted just my family but other people who know me."

On The Challenges of Being Home
"It hasn’t been difficult at all. I think that’s one of the advantages of coming home early. I was on the ranch long enough to learn new ways to eat, new things about nutrition. And to get in the habit or at least to become more open minded about exercising. The challenges that I’ve had mainly are just challenging myself to go higher, to exercise more, to go beyond my comfort zone... I live by myself and so the meals are not a problem. And one of the advantages of being sent home early is that you haven’t become so ingrained in being away from everyone and everything that when you go home it’s a big shock."

On What She Learned About Herself from The Biggest Loser
"There are two terms that I don’t use lightly… The first word is friend and the second word is love. I save the word friend for people who I really care about. And when I say I love someone it’s usually for my family or somebody close to me. So what I learned from The Biggest Loser is that we are connected so well because we went through the interviewing process and we got to know each other as it whittled down. But I really and truly consider everyone on the ranch or all the people in Season 12 my friends and I love them... It’s like we’re one family. I think that they are just the best. We made a pact before that we were going to stand together and stand tall and we weren’t going to bicker, because that’s how much we cared about each other... We have a bond… And it taught me that I’m capable of spreading out my love and the word friend beyond my immediate circle."

On Advice for Future Contestants
"I would tell them to first of all whether it’s the first time, the second, third, fourth, fifth, however many times they’re trying out, to keep going because you never know when you may be one that’s selected, because you never know what the theme is. But also when you go there to be yourself. You don’t have a lot of time when you’re with the casting director. So go be yourself and show your sense of humor, show your personality. Try to think of something that will grab the person who you’re talking to, grab their attention or make your video intriguing enough that they’ll want to know more about you because, my daughter and I, each time we went further and further in the process. This is the fourth time I tried out… And each time it got easier and easier. And then this time because they were singles and the theme was Battle of the Ages it was my charm. The fourth time was my charm."

On the Most Memorable Biggest Loser Moment
"I’d probably say just when I saw the show last night I had forgotten about how when we were walking, carrying the pole, how everybody came running out to help us. And I forgot how that touched me so when that happened. And I think that that would be a Kodak moment for my heart, because it’s something that they didn’t have to do. And Anna coming out too, I just thought it pulls together how much we considered ourselves a team and a family. It’s like we’re all there for the same reason. And they came out to help us and we’re there to lift each other up and to make sure that all of us complete our tasks. So I think that would be my most memorable moment."

For related stories check out:
Anna Kournikova and Dolvett Quince on The Biggest Loser
An Interview with Biggest Loser Winner