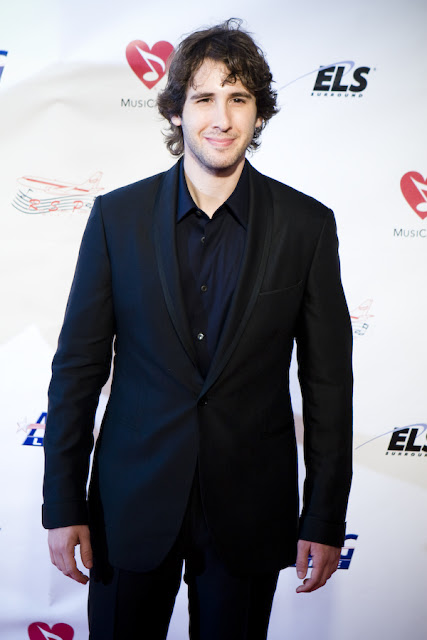 Josh Groban became a big deal when he was just 17 years old. Now the multi-platinum recording artist is establishing himself as more than just a singer, with acting gigs in films like Crazy, Stupid, Love and on TV shows like The Office. In a recent conference call interview Josh talked about his love of acting and his commitment to his music career.

As a fan of The Office, Groban was thrilled to be acting in a recent episode, but he also enjoyed taking in the atmosphere when he had a chance. He recalled, “There were scenes where I was just background and just watching [the cast] do their improv and watching them do their scenes together. And seeing firsthand how brilliantly they all play off of each other, which it’s so easy to see that they’ve been together a really, really long time because they basically are all one big comedy improv troop.”

While he’d love to try his hand at drama on Breaking Bad or appear on other comedies like 30 Rock, he admitted that The Office was at the top of his wish list. He revealed, “If anybody were to say to me, ‘Just quick off the top of your head what’s a show that you would love to be on,’ I really would’ve just pulled out The Office, because it has consistently been so smart and so funny. And such an ensemble-based show and such an improv-based show, that not only am I a fan of the show just watching it on TV, but I knew going into it that just the experience on set would be one that would be a lot of fun. And I was absolutely right.”

Josh divulged that he’d love to pursue other film and TV roles but that it’s difficult given his commitment to his music. He remarked, “The complicated thing right now is that I’m actually on tour. And when Mindy Kaling asked me about doing the show, she actually direct messaged tweeted me. And I was shocked to hear from her and I said, ‘Yeah, I would love to do the show. When are you thinking?’ And it just so happened that the exact week that they were taping this episode was the exact week out of an eight-month tour that I’m doing that I happen to be in the Los Angeles area. So it was 100% just serendipity that I happened to be in town when they were taping this episode and I’m so happy that the stars lined up for that.”

But don’t look for Groban to give up his day job any time soon. He confessed, “Music will always be my number one. Singing is my life. It has absolutely been my inspiration from day one… Even when I was doing theater, it was always under the notion that it would be involving music whether it was classical or musical theater. It was always the combination of music and singing with the story and with the acting that inspired me. And as I’ve grown into this recording career it’s been such an incredible way for me to explore my inspirations growing up and to express myself. I will always love doing acting jobs when I can and it’s always a lot of fun for me but the singing is always going to be number one.”

So the natural progression would obviously be a stint on the Great White Way. Groban seemed open to the idea. He acknowledged, “I grew up just loving theater and I’ve got such a great group of friends in the Broadway and West End community… It’s what I originally started going to school for so I think my voice is really right for it.”

He added, “The nice thing about that style of singing and those roles is in that world I still have some time left as far as some of the roles that I would want. I’m still relatively young when it comes to that… I would 100% want to do that in the future and it’s just about the right time.”

Posted by Pop Culture Passionistas at 7:56 AM