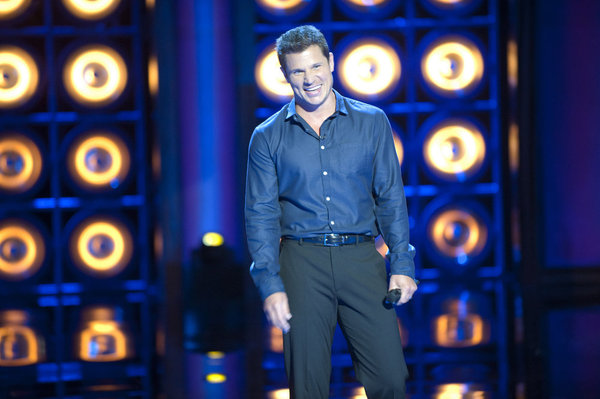 Nick Lachey is back this season as host of the new and improved version of NBC's The Sing-Off. The show's been expanded to 11 weeks with 16 acts and even more diverse musical styles. Nick is joined by veterans Ben Folds and Shawn Stockman and new addition Sara Bareilles at the judges' table. In a recent conference call Nick talked about what each of these three musicians bring to the show and how he'd fare in their shoes.

To begin with Nick commented that Sara is a very welcome addition to The Sing-Off family. "Sara has been such an absolute joy to be around to work with. She's such a brilliant songwriter and musician in her own right and she brings such a wealth of knowledge to the panel… She's the absolute perfect fit for what The Sing-Off is and what The Sing-Off’s all about."

The three judges come from very diverse backgrounds. Shawn rose to fame in the R&B group Boys II Men. Sara is a successful singer/songwriter who claimed the top spot on the Billboard Pop 100 with her single "Love Song." And Ben began with his band Ben Folds Five but soon turned to a solo career collaborating with a range of artists from William Shatner to Regina Spektor.

According to Nick this diversity is what makes the group's chemistry ideal. "It's a great reason why our judging panel is, in my opinion, the best on television. They all come from such accomplished careers but very different careers. Sean is [from] the most accomplished R&B group ever. Sara as a solo artist is one of the best songwriters I've ever had the pleasure of meeting and an incredible performer. And then Ben [has] done the solo thing and the group thing. And everyone comes from a different place but it's a very successful and established place. And I think that that's why they bring so much knowledge and so much expertise to every comment they make."


It is definitely what sets the judging panel apart from other shows in this genre. Ben, Sara and Shawn don’t just comment on how the performers look or pass judgment without giving a reason why. The Sing-Off judges always offer concise, specific constructive criticism to the acts on the show.

Nick pointed out that his three co-stars make his job enjoyable. "My favorite part of being a part of the show is the dress rehearsal with the judges where everyone just kind of improvising and talking off the top of their head. And Ben always has some very witty and funny things to deliver in dress rehearsal. Some of it [is] not meant for network airtime. It's been a lot of fun to get to know him and get to know his sense of humor because he’s certainly a funny guy."

And although he does not always agree with his co-stars he has nothing but respect for the job they have to do. He stated, "There is certainly situations where my opinion differed from what the judges ultimately decided. But that's the beauty of my role. I don't get a voice that I don't have to make those tough decisions. I'm probably not unlike anyone else watching at home who thinks, 'Oh man I can't believe they were sent home. I was expecting some other group.' As I'm sitting backstage waiting for the judge's decision sometimes when I ultimately see it and see who's been sent home it's the same reaction. So they certainly have their criteria and their method, if you will, and even I am not privy to that. So it’s for me I'm almost a spectator in that sense."

Still if he could not stand on stage as host, given the choice between being a contestant or a judge, Nick is a performer all the way. "It’d obviously be fun to be a contestant and then be a part of a group competing but at the same time I know how hard they have to work. This competition is a lot of singing in a very short amount of time and the competition is really stiff. And I can't imagine how much pressure those groups are under. But at the same time it's neat to see the family bond that they all share together. And they really do pull for one another so it's a neat dynamic." He ultimately stated, "I guess I’d want to be a contestant. Judging’s not my thing. I'm not good at it."

Watch Nick on The Sing-Off on Monday nights at 8 p.m. EST/7 p.m. Central on NBC.