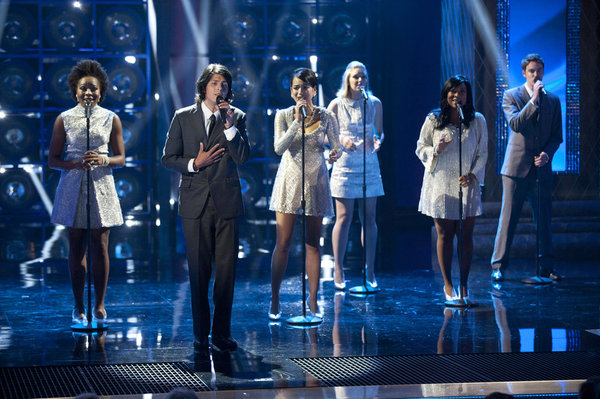 If you've been watching The Sing-Off, you know that Kinfolk 9 was eliminated last week. The group was considered an underdog of sorts because they had not been singing together for nearly as long as any of the other acts. And those precision blends and seamless dynamics take incredible amounts of time to perfect. In a recent exclusive interview, Kinfolk 9 member Jenilee Reyes talked with us about forming the band and their experience on the show.

Jenilee, like the rest of the group's members, is a solo artist. But she brought together a group of her friends and colleagues that she had worked with throughout her career to form a super group. They had only been together for a few months before they auditioned for The Sing-Off. And, in fact, one member dropped out just weeks before the show and John Hall stepped in at that last minute. So the group we've been watching these past few weeks is really in its infant stages.

But being the new kids on the block did not make them outcasts among their fellow competitors. Jenilee stated, "The entire cast reached out to me on The Sing-Off. During our bracket everybody was so welcoming and understanding of the situation that we were in. Being new to the a cappella world it wasn't very much like a competition it was more like, 'Whatever you guys need help with.' It was really nice to have that support from people that you're competing with."


The nine members of the group come from incredibly diverse backgrounds including pop, jazz, rock and gospel. They have influences ranging from Jeff Buckley and U2 to Mariah Carey and Etta James. But Jenilee pointed out that this range is what makes them unique. "I think that's what makes our group special is the fact that we take so much from different genres. And we take all those thing and put it into one which is what makes our group sound the way we do."

The theme of last week's competition was songs from the 1960s, so Kinfolk 9 went with the quintessential 60s band — The Beatles. Jenilee explained that at first they chose the song "Blackbird" and rehearsed it for a long time. But in the final days leading up to the performance, they felt like it wasn't up to their high standards, so they changed songs to "Let It Be."

She admitted, "'Let It Be' was so perfect because we've all come to a point where we had worked so hard to sound perfect and get 'Blackbird' right and it wasn't coming out. So when we decided to sing 'Let It Be' and it came out so naturally we were like, 'Maybe this is what we were meant to sing.' And the message of the song for each and every one of us was whatever happens — whether we get sent home this week or whether we get to stay. This song meant a lot to us in that way."

The performance was actually her favorite of their group's time on the show. She professed, "It really was such a spiritual experience being on stage and singing that song. And having relived it again last might, it was so emotional, seeing it from an audience perspective. We were all watching it together here last night and we definitely got teary-eyed seeing the entire thing all over again."

But when it came time for the judges to announce the eliminated group, Kinfolk 9 was not shocked when Nick lacey read their name. They chose Beck's "Loser" as their final number on the show. Jenilee explained, "We chose 'Loser' as our swan song because we thought it was a fun way to go out. As much as we get portrayed as this emotional group, we also have a fun side to us and we wanted to show that we’re not sore losers, and we can poke fun at ourselves for getting eliminated. Because at the end of the day it was an amazing experience whether we got kicked off last night or later on. We have no regrets and we appreciate the time that we had."

For related stories check out:
Ben Folds Says The Sing-Off is Providing Harmony
Interview with Javier Colon from The Voice