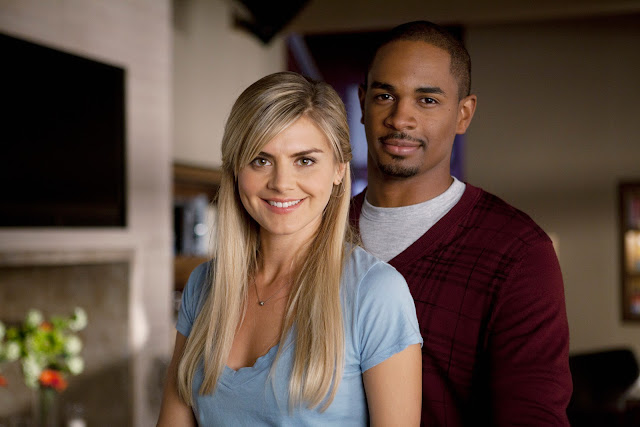 Fans of Happy Endings will not be surprised to hear that Damon Wayans, Jr. and Eliza Coupe are just as funny off screen as on. During a recent conference call interview the two actors talked about improving and whether or not there’s drama in their future.

Damon looked back at the day he tried out for the series, saying, “My audition got me excited for it, when I went in and I auditioned in front of David Caspe, creator of the show. And I walked in there and the first thing he said to me was, ‘F around,’ but he used the real bad word when he said it.”

The actor continued, “So when I just go in I got to do whatever I wanted, I didn’t even have to really stay on script. So I love that and that’s what made me fall in love with the show.”

As for spontaneity on the show, Damon admitted, “There’s actually tons of improv. That’s what I like about coming to the show every week… We shoot like 12 to 15 hour days, but that’s what keeps me going, I don’t hate my job, is we get to say whatever we want. And they choose whether or not they’re going to use it… There’s a lot of shows on ABC that don’t get to do that at all and so I’m happy about that.”

Because they can say what’s on their minds, Damon admitted, “We shoot probably a Rated R show, and then you get to see that. We shoot takes that are written on the script, but then we do our own stuff almost all the time. And so we get a whole different show, so they just kind of pick and choose what they want. But it’s definitely nowhere near what we actually shoot. We shoot crazy things.”

Eliza added, “Yes, I’m always surprised when we go in and do ADR. I know what was happening and the way we ended the scene, and then they have to clean it up for ABC…. It’s a good thing because we might be in jail if we [let] what we wanted to have air, air.”

As for whether or not either actor is looking for more dramatic acting opportunities, Eliza confessed, “I’m not auditioning at this moment because I’m on a phone call with you. But I’m outside of an audition room right now to do King Lear again. No I would love to do a dramatic comedy all of that. It all interests me. At some point I want to do my Monster like Charlize Theron, so I’m buckling up for that.”

On the other hand, Damon divulged, “I haven’t [gone on an] audition for anything dramatic yet. I think I’ll take my time with that, kind of enjoying the comedy. Unless I do some weird indie like Gummo. Yes, I’m totally going to do something super weird.”