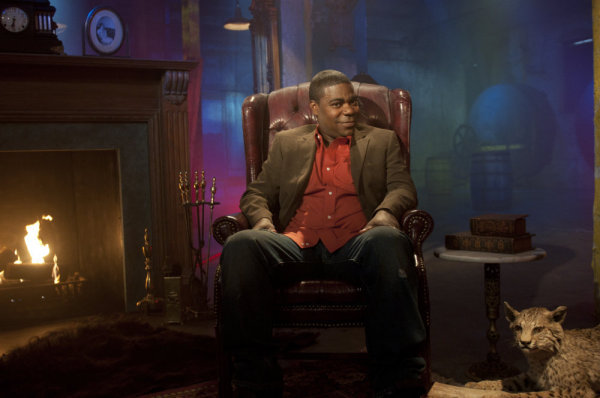 Syfy's Scare Tactics is back tonight for a fourth season of supernatural-style hidden camera pranks. Also returning for another go-round is host Tracy Morgan. When Tracy is not making us laugh on 30 Rock, he's making us scream on Scare Tactics.

On the show, friends and family work with the Scare Tactics team to lure loved ones into elaborate hoaxes, from alien abductions to encounters with the living dead. Tracy, who in past seasons mostly introduced the scenarios, will be more involved in the scenes this time. In a recent conference call interview he revealed, "I get to act in some of the scares a little bit more this season."

In fact in the premiere episode, Tracy acts as a museum tour guide because he is related to an ancient pharaoh. When the mummy comes alive, the mark is in for the shock of his life. Other episodes this season feature encounters with a giant flesh-eating creature, a mysterious deadly mist and crazed horror film star taking his role a bit too seriously. Tracy commented on what viewers can expect, "Some good comedy, some great scares and great tactics."


But when asked to choose a favorite moment from the series, Tracy was at a loss. "I don’t want to single one out. They’re all hilarious. They’re all scary. It’s a great shock value. I don’t think I could just pick one out and say this one scared me the most because they’re all great."

But then the comedian did settle on a few standouts. "But one comes to mind and that’s the devil baby. The first season I did, when a baby comes out and it was just hilarious. And the one with the little rat boy and the guy was so afraid and it was just funny. I just thought it was hilarious that people were so afraid of it."

Tracy has a theory as to why scaring people is so funny, "It’s because it’s not happening to us. We laugh because it’s not happening to us. When someone else is being frightened, it’s funny to us because we’re not the ones being frightened, like voyeurism. If you see someone slip on some ice, you will crack up because you’re not the one slipping on ice."

Since Tracy is on a show about scaring people, the question needed to be asked. What scares Tracy Morgan? He joked, "What am I afraid of? Oh, the IRS."