Ed Helms on Andy Bernard’s Evolving Relationships on The Office 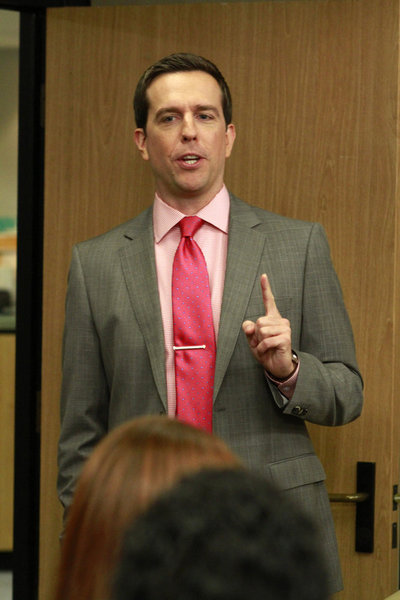 Last month one of television’s greatest behind-the-scenes mysteries was solved when fans discovered the name of the actor who would replace Steve Carell on The Office. And even though many thought the job would go to James Spader, it turns out that he’ll be serving as the new CEO of parent company Sabre while Ed Helms’ character Andy Bernard will be Dunder-Mifflin’s new office manager. In a recent conference call interview, Helms talked about stepping into the role and his character’s evolving relationships.
Helms explained how the Nard Dog will tackle the manager position differently than Michael Scott did. He remarked, “The biggest difference right out of the gate is that Michael was a well-established manager for much of his run at Dunder-Mifflin and that Andy is just finding that. It’s a fresh new thing. And so Andy’s leadership is a little bit of an open question and that’s what I’m really excited to flesh [out].”

He reflected on seeing an important character shift in Andy during the season premiere, saying, “It was really fun in that opening episode to see a little bit of that backbone and see a little bit of a poignant turn about what might be ahead. But I also think Andy comes from a place of privilege and that informs his worldview.”

That doesn’t mean Andy won’t have his problems this season. Helms revealed, “He’s also prone to anger management issues. But… at the end of the day, he’s trying to do the right thing. And that’s why he stepped up in that first episode. But he has so many personal hurdles and insecurities that it’s a real struggle.”

Adding to that turmoil is the nervous energy that Andy projects around new CEO Robert California. But Helms said of the actor behind the role, “James Spader has played a lot of very creepy and odd characters throughout his long and wonderful career. James Spader the man could not be more different from those guys. He's a wonderful sort of benevolent and cheerful guy. And so that is a fantastic energy to have on set. And it's wonderful. It's a kind of fun new energy for us all to respond to.”

As for Spader’s intense CEO, Helms admitted, “Now his character, of course, Robert California, is different than that. Robert California is a kind of aggressively confident person who seems to take a lot of pleasure in exerting his power. And that is a really crazy energy because it's so new to Dunder-Mifflin. And it's not something that Andy Bernard is particularly well equipped to deal with and that is exactly why it is so fun.”

Or course Andy’s also got to contend with his office nemesis Dwight Schrute. Helms confessed, “Let’s just say the checkered past carries over to a checkered present. And Dwight is someone who responds very well to a firm hand of leadership, which Andy is still sort of searching for a little bit… A lot of where Andy still has to go and where he has to travel… Dwight provides a constant friction for that.”

As for Andy’s romantic side, Helms addressed the status of his character’s relationship with Erin the receptionist. He admitted, “They're a pretty odd pair because they have very strong emotions and very poor communication skills. There's always been something charming about watching them try to connect and try to communicate. Of course now with Andy's new boss position, there's a power dynamic that comes into play, which just makes all of that tension and awkwardness that much more difficult. And things do get tricky, especially around Halloween.”

While he couldn’t reveal too much about what was going to happen, Helms did say, “There is definitely some tension brewing with Erin and Andy in there. Her Halloween costume is just preposterously adorable this year, so it just makes it that much weirder.”

Now that he’s the boss, the producers are going to reveal a bit more about Andy’s personal life as well. This will include the introduction of Andy’s brother, who’ll be played by Josh Groban. Helms addressed the casting choice, “We all know Josh is an amazing singer and then I saw him in ‘Crazy, Stupid, Love’ and thought he was great in that. And so I was not at all surprised that he was really great and hilarious to work with as an actor, too.”

Helms was happy to have the vocalist join the cast. “The choice of Josh is kind of a fun teaser because obviously he is musical and we all know that Andy has a certain penchant for music. Josh's appearance is part of a really exciting episode for me and for Andy because it's really where we learn a lot about Andy and not all of it's good and some of it's sort of poignant. But there, of course, is some fun music that gets mixed in there, too.”

Again Helms couldn’t disclose too much but he did tease, “There is some rivalry, but it takes a compelling turn that I think is unexpected. The source of the rivalry may not be what you expect. Of course, Josh is a great singer and that wasn't lost on our writers. But I'm excited to show the fans where and how Josh's character fits into Andy's life and also what it means for who Andy is. And it's not all good. You can see an aspect of Andy exaggerated in Josh, which is a guy who's even more naive and socially sweeter if you can believe it. So it's interesting to see the two of them together.”

Catch The Office on Thursday nights at 9 p.m. EST/8 p.m. Central on NBC.
Posted by Pop Culture Passionistas at 2:00 AM