Filmmaker Carl Colby on The Man Nobody Knew 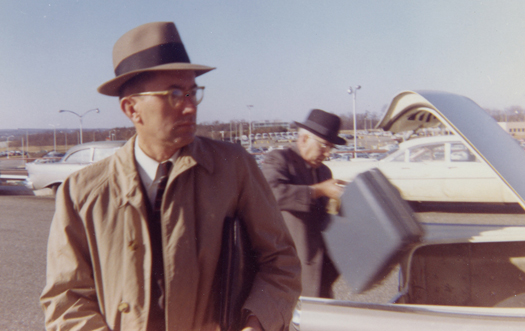 A lot of people may feel like they wished they had known their father a little better, spent more quality time or gotten to know his deepest thoughts. But for one man, this longing was compounded by the fact that his dad happened to live a secret life, working undercover for the CIA. Emmy-winning filmmaker Carl Colby's new documentary The Man Nobody Knew interweaves the story of William Colby's career designing clandestine actions for the U.S government and his family's life of world travels, ending in the ultimate unraveling of it all.

Colby grew up in exotic locales all around the globe. In an exclusive interview, he compared himself to Jerry Mathers of Leave It to Beaver fame. The only difference, he pointed out, was "I wasn't living in L.A. I was living in Saigon. I was living in Rome."

For a long time, Colby thought his dad worked for the U.S. Embassy until a friend outed him as a spy. Once he was in on the secret the filmmaker had a purpose, to help protect his dad. He recalled, "Little things would come up every few months that I'd say, 'God I went on this hunting trip with Mr. X. It was incredible. He's such a great shot.' And he'd say, 'Very Interesting. Don't ever mention his name again.' So I realized he must be deep cover, not a good idea to blab about him. So that's not doing too much but I'm part of the family now. It's not 'The Sopranos,' but somewhat similar."

And for a while his life resembled what we have all seen in the movies. Colby stated, "In the old days it was Bond. It was James Coburn. It was I Spy. It was all very cool. And JFK and RFK loved the spies." He continued, "But then of course there's the dark side when it starts to unravel. And what is he really doing? And is it moral? And is it right?"

At the heart of the film is the nagging question about whether Carl and his mother and siblings were just a cover for his father's covert actions. Ultimately, the filmmaker confessed, "Yes, it was a cover."

Watch our interview with Carl to hear more about the film and why he decided to make it.

Carl Colby on Finding Out His Father Was a Spy


The Man Nobody Knew premieres in Los Angeles at the Landmark Nuart on Friday, October 14. It will also be playing in art houses across the country through the end of the year. Check local listings for dates and times.

For related stories check out:
Gary Takesian Implores People to Teach Your Children Well
Some Thoughts from Bobby Kennedy, Jr About the Environment